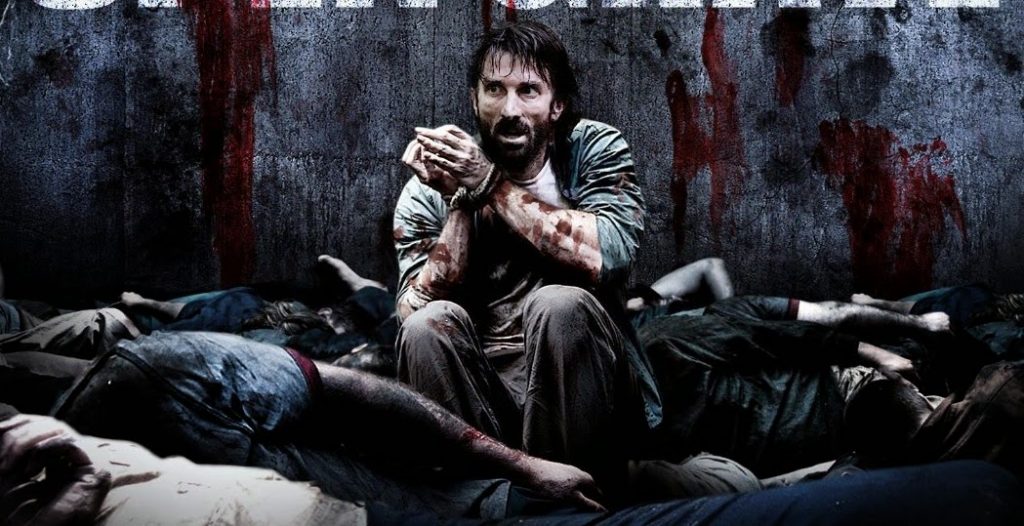 Imagine waking up in a mass grave – with no memory of who or where you are. It is the aftermath of this grim, terrifying concept that director Gonzalo López-Gallego (Apollo 18) and stars Sharlto Copley and Thomas Kretschmann present us with in Open Grave.

After waking up in the wilderness in a mass grave, an amnesic man (Copley) meets a band of survivors staying in an abandoned mansion.  This group are survivors of a deadly outbreak that has turned the population into violent, flesh-hungry fiends.

Instead of launching us straight into the zombie pandemonium like so many others in the genre do, Open Grave is refreshing as it spends a reasonable amount of time crafting its bleak, unsettled atmosphere. Feeling part who-dunnit, part-zombie-flick, Eddie and Chris Borley’s narrative sets up a number of intriguing questions to hook us in – with the earlier scenes which focus on the feuding paranoid survivors even feeling like a gritty update of an Agatha Christie text.

Much of this intrigue takes a backseat in favour of zombie-themed chaos which takes over later in the narrative. Lopez-Gallego adds enough gruesome set-pieces and tense chases into the mix to ensure the film’s pulse remains relatively quick for the most-part. There is an occasionally inventive grisliness in many of these set-pieces – such as a scene which sees a zombie tangled up in barb wire, which is enough to turn the stomach. However, much of the horror of Open Grave will have left you by the film’s conclusion – largely feeling forgettable and generic.

There is much to be admired in the bleak and sparse visuals used by cinematographer José David Montero which helps turn the countryside setting into a unsettled, troubling landscape. Other redeemable assets come in the form of the twists and turns in the Borley’s screenplay – featuring an inventive conclusion that tips much of the film’s events on their head.