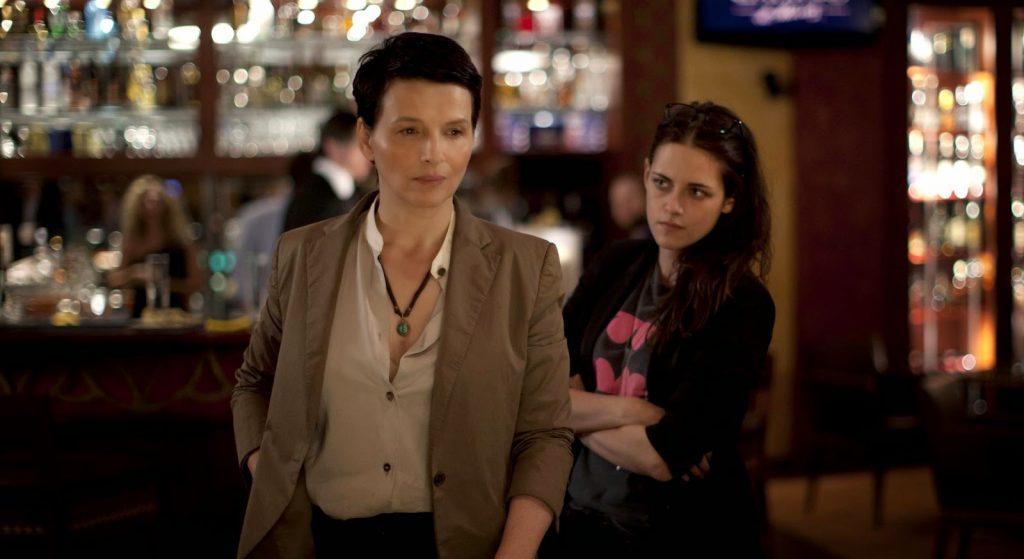 Olivier Assayas writes and directs Clouds of Sils Maria, an ambitious character study examining the lines between fiction and reality, and the effects this plays on all involved. As well as an intricate narrative filled with compelling themes, Clouds of Sils Maria features career best performances from stars Juliette Binoche and Kristen Stewart.

Internationally acclaimed actress Maria Enders (Binoche) has been asked to star in a revival of Maloja Snake, the play (and later film) that made her a household name. However, Enders is not wanted to reprise her role of Sigrid (the young and suggestive woman who toys with her employer), but for the role of her vulnerable, manipulated employer that is ultimately driven to suicide, Helena. After reluctance Enders accepts the part and ventures to Switzerland with her assistant, Valentine (Stewart), where they rehearse the play – unaware that they both falling into the respective roles.

Assayas has crafted a complex piece that examines the blurring lines between prose and reality. Whilst Maria and Valentine rehearse they do not mirror the exact characteristics of Helena and Sigrid, but the relationship dynamic between the pair begins to imitate that from Maloja Snake. Lines of dialogue read between the pair fuse seamlessly with their real life conversation – with viewers having to adapt, questioning whether the pair are rehearsing or conversing. This becomes more relevant as the tension between the actress and assistant builds – and both adopt further traits of their fictional counterparts.

Assayas fascinatingly examines how the actor (or those involved with the acting process e.g. Valentine) is influenced by the process of the roles they play. We see Maria confront the concept of ageing head-on, by taking the role of the ‘unloved’ older woman, a role which she fictionally scorned herself in a prior adaptation. Maria now has a previously unseen sympathy for the role of Helena, since she has become the older actress working alongside current box office star Jo-Ann Ellis (taking on the role of Sigrid). There is also a playful satire on the concept of the star – particularly the young tabloid celebrity, with some of the film’s most darkly amusing moments coming when Maria is swept up the media frenzy surrounding Jo-Ann (Chloe Grace Moretz). A particular highlight sees Maria googling the young star, horrified of the trashy tabloid smarm that she finds.

Clouds of Sils Maria is spearheaded by dramatically sound and subtly complex performances from the divine Juliette Binoche and the outstanding Kristen Stewart. Binoche is outstanding in her reflection of a woman concerned by regret and fear, one that is essentially longing for and resenting her lost youth. Stewart excels in her representation of an unheard youth, bringing a magnetism and charm to the fold as the headstrong assistant. Both actresses shine on screen together with the bond between the pair surpassing that of star and assistant, feeling authentic and dramatically well-pitched.
Praise should also go to the astounding visuals – with cinematographer Yorick Le Saux capturing the beauty and isolation of the enigmatic Swiss Alps setting.

Clouds of Sils Maria is ambitious, thoughtful, and performed with a heartfelt authenticity. Binoche and Stewart are simply magnificent here, whilst Assayas has crafted a compelling and gorgeously-pitched character piece.