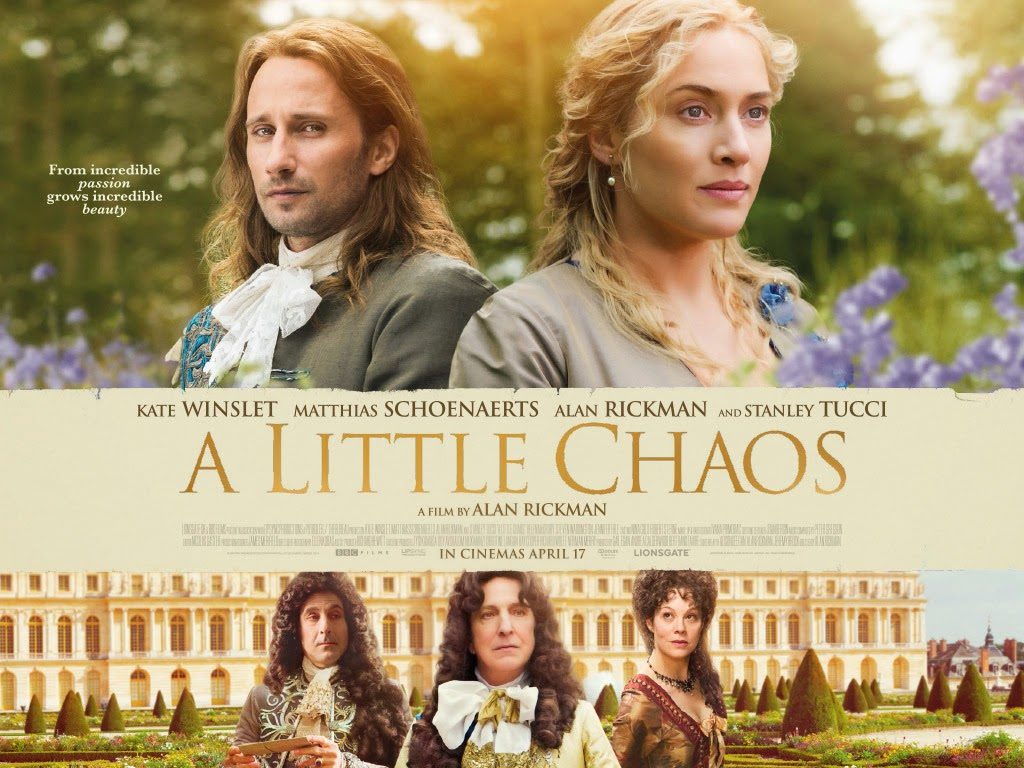 Alan Rickman returns to the director’s chair for the first time since 1997’s The Winter Guest for his sophomore passion project, A Little Chaos. The actor-director presents a lavish period piece filled with heart which is marvellously lead by Kate Winslet’s forward-thinking female protagonist.

When landscape designer Sabine De Barra (Winslet) is hired to work on a new project for King Louis XIV’s (Rickman) Versailles gardens by senior designer André Le Notre (Matthias Schoenaerts), she is thrust into the heart of regal society.

As would be expected from a piece concerning French nobility in the late-1600’s, A Little Chaos is a lavish tale where Rickman manages to successful exude the shimmering elegance and decadence of his Versailles setting. From sweeping regal gardens to lush golds and creams of the palatial interiors, Rickman’s direction is packed with a aesthetic might and awe that fully immerses us within the period setting. Like Winslet’s Sabine, we are also outsiders to regal French society and are likely to be just as swept away by the exuding majesty of the piece.

Whilst visually A Little Chaos may sounds slightly traditional and expected, Rickman and fellow screenwriters Jeremy Brock and Alison Deegan craft a tale that is surprisingly forward thinking for a period project. There is a joyous feminist streak pulsing through A Little Chaos, celebrating female initiative and capability captured in Winslet’s gifted designer. In perhaps one of its most interesting narrative tangents Rickman’s film explores the initial sexism faced by Sabine as she arrives for her interview with Le Notre and immediately is passive-aggressively dismissed by her competition.

However, Sabine is a fascinating protagonist. She is intelligent and bold, yet troubled by the death of her husband and child – a recurring trauma that continually cripples her talents. She feels overwhelmed by palace etiquette and formality, but holds herself well when challenged in this arena. Winslet is so terrific here that Sabine is an entirely relatable character – so much so that sequences showing her interacting with Rickman’s King Louis are the film’s most emotionally poignant. Sabine breaks Rickman’s regal, authoritative titan down to a human level – free from puffed wigs and majestic gowns – in a charming scene where the pair talk love, loss, and flowers outside the confines of royal procedure.

There are engaging, heartfelt relationship dynamics pulsing throughout the piece – as well as King Louis and Sabine’s bond, the gradual romance between Le Notre and Sabine is utterly convincing. Thanks to nicely textured performances from the cast there is a delicate calmness about the tale – well until Stanley Tucci’s flamboyant tour de force as Louis’s brother. Tucci arrives like a hurricane of camp, clearly relishing every perfectly enunciated line of regal dialogue as he swishes around in his decadent period garbs. The humour that Tucci brings to proceedings is entirely welcome as occasional proceedings can feel somewhat delicate and overly tame. This is my no means a bodice-ripping romp that some may be expecting.

Winslet is the shining beacon at the heart of this piece bringing an authentic energy and endearing warmth to A Little Chaos. However, Schoenaerts is an equal joy to watch as the man torn between manipulations from a controlling wife and his affections for Sabine. Like Tucci, Rickman also relishes his time in character and embracing the period camp of the tale, bringing a steely warmth and wit to the role of the slow-spoken monarch.

A Little Chaos delivers the lavish aesthetics expected of it, but above this an endearing and forward-thinking celebration of the strength of the human spirit unfolds.