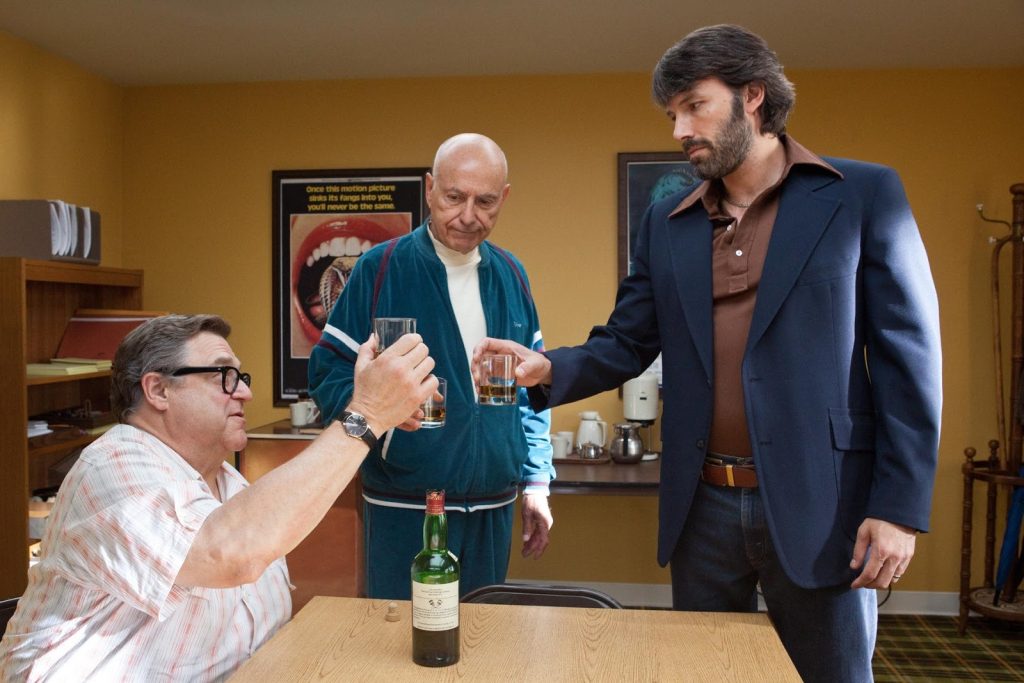 One could be excused for not being too excited by the sound of Argo. Ben Affleck’s heavy seventies beard, the bad outfits and the drab colour tones just scream stodgy seventies-set fare. Whilst the first of these two are undeniably present, our initial preconceptions were shattered as Argo is the most tense and gripping watch of the year.

Argo convincingly captures the heated political climate of the late 1970s and early 1980s, from the Iranian riots to ther divisive effect on US soil. Affleck competently does this through meticulous use of authentic news broadcasts, political speeches and the recreation of real events, completely transporting the audience back to this heated time of unease and ever-growing panic.

Given this context, it should be evident that Argo is going to be a very tense watch (sometimes uncomfortably so). The opening scene featuring the raid on the Iranian embassy thrusts us right into this world, where we see angry mobs of Iranians storming the building – Affleck directs with a sense of foreboding, capturing the growing unease at the location beforehand. Argo continues on this level, with the scenes set in the CIA offices of the US feeling as energetic and gripping as those in the centre of Iran, most notably the chaos they induce in the film’s climax.

Fortunately, Argo is not all unbearable tension with Chris Terrio’s screenplay featuring a well-handled sense of comic awareness. This is most notable in the Hollywood set act of the the film, where Mendez sets out to create an air of authenticity surrounding his film production – gaining the services of make-up man, John Chambers (John Goodman) and producer, Lester Siegel (Alan Arkin). The contrast between the unease of the hostage crisis with the phony world of Hollywood, serves as an amusing satire on the film industry – capturing the Californian town in its own little bubble. Arkin and Goodman are flawless, stealing most of the scenes the pair feature in.

As well as his directing, praise should also go to Affleck for his stellar and completely understated leading performance. Seeing the CIA specialist cope with the escalating pressure of his rescue mission allows for Affleck to shine, particularly in the airport set final act of Argo – one of the most gripping sequences in recent cinema.

Like all films based on true events, Argo has its share of inaccuracies – which are unlikely to harm the viewing experience. However, one cannot help but feel somewhat cynical during the film’s overly rounded conclusion which could have perhaps benefited from being five minutes shorter.

Argo shows Ben Affleck as one of the most talented director’s working today with this powerful watch remaining energetic and gripping throughout. Intricate period detail and stellar performances from Affleck, Goodman and Arkin ensure Argo is one of the most refreshing films of the year. There is certainly no turkey in sight, so we could not even use our Gigli gobble gobble reference.