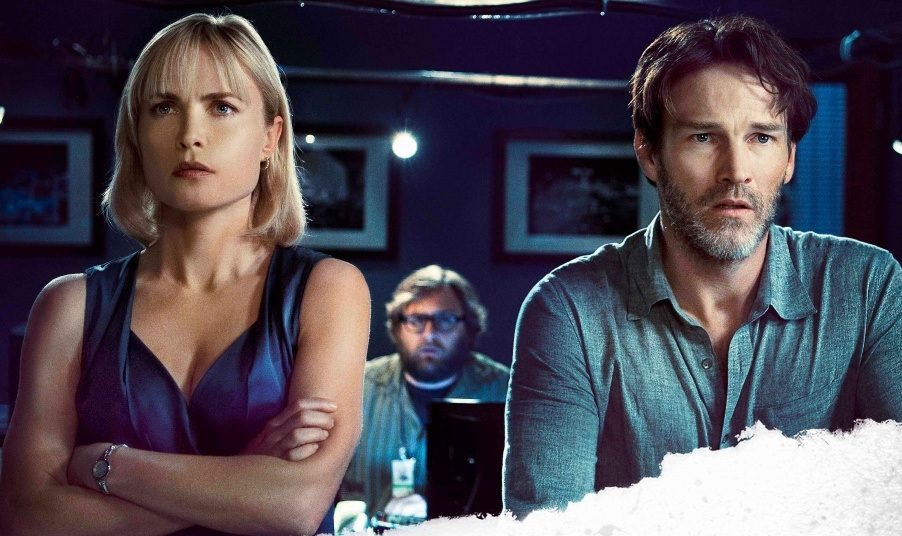 Olatunde Osunsanmi impressed with The Fourth Kind back in 2009 – a film that utilised the found-footage style before it started to bog the horror genre down. Now, five years on, every second horror film released is based on ‘found-footage’ with most tripping up over the predictable genre conventions that come with it – and judging by Osunsanmi’s latest film Evidence, he is not excluded from this.

Evidence follows a team of detectives as they try and piece together the events that lead to a brutal massacre at an abandoned gas station. Clues come in the form of the victim’s handheld devices which reveal a mysterious killer may be to blame.

Starting with an intriguing high angle freeze frame over a desolate gas station turned mass crime scene – the camera begins to shift giving us a look at the chaotic scene filled with ambulances, police officers and gory remains – all frozen in time. This set-up is immediately intriguing, and this exciting structure continues as we see the detectives sift through the evidence and piece together the events that lead to such gruesome consequences. These police-based scenes are shot using traditional means, but proceedings eventually become handheld when the officers find the footage from the victim’s cameras and phones.

Despite an impressive start to this found footage chapter – which sees a variety of twenty-somethings stranded when their minibus crashes cross-country – Evidence slowly turns into a conventional found-footage serial killer horror. Osunsanmi establishes quite a creepy atmosphere and the desolate sun-stroked gas station that the action unfolds in is not without its sinister charm. However, there is little tension to be relished with Osunsanmi’s direction – felt through its noticeably uninspired cat and mouse killing sequences.

It does not help that Osunsanmi opts for a bizarre night-vision style for most of the film – a style which does not take the standard green-black night vision colour scheme. Instead the night shots are filmed with introverted colours that makes everything almost entirely visually repellent and incomprehensible.

Whilst most of the found-footage material does not impress, Evidence makes up for things through the detective sequences which are tense and well-performed by Stephen Moyer and Radha Mitchell. The ending in particular which sees the pair discover a twist in the serial killer’s identity steps proceedings up a notch and redeems some of the film’s lesser parts. Albeit this is a twist that is not nearly as clever as screenwriter John Swetnam seems to think it is – however, it’s still likely to draw Saw comparisons from easily pleased horror aficionados.

For the most-part its incredibly formulaic stuff, but there are enough twists and turns in Evidence to justify giving it a watch.