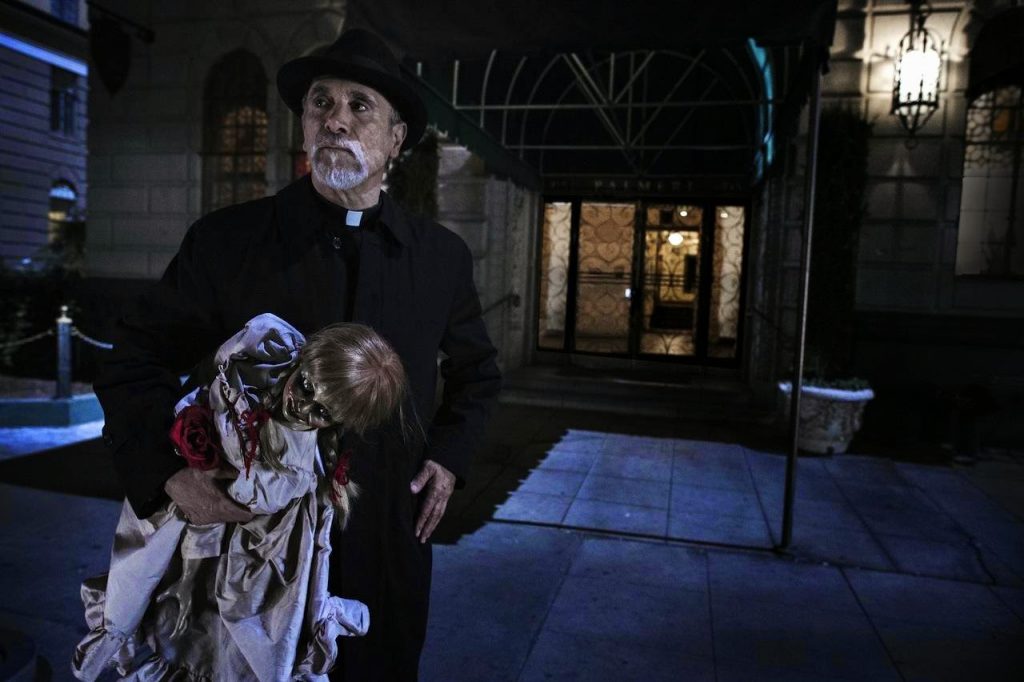 Given the commercial and critical success of James Wan’s 2013 hit, The Conjuring, it is no surprise that New Line were eager to revisit the project. With a direct sequel down for an October 2015 release, the studio have filled the 2014 gap with a smaller-budgeted spin-off to the project – focussing on the origins of eerie, scene-stealing demonic doll Annabelle.

With Wan’s regular cinematographer John Leonetti stepping up to direct, Annabelle has a similar visual aestheticism and narrative to the likes of The Conjuring and Insidious. This means that the scares are generally sharply effective, whilst the visuals and narrative evoke some classic horror influences. The most prominent of these influences is Rosemary’s Baby – given the film’s apartment block setting and the cult connotations that creep throughout Gary Dauberman’s narrative – however, Annabelle is neither as tense nor disturbing as Polanski’s masterpiece.
The main issue with Annabelle may be the marketing of the film as a ‘killer doll’ film (immediately evoking the campy connotations of Magic and Child’s Play), however the wide-grinning, rosy cheeked doll conjures up more laughs than scares. Instead, Annabelle feels like more of the same haunted house theatrics that we have seen from Wan – slamming doors, self-playing record players/sewing machines, and ghostly children all feel more cliché now than terrifying.
Fortunately, when Annabelle strays from these more conventional scares there are several inventive moments of unsettled tension and horror. Dauberman’s screenplay opens with several references to the Manson Family, planting the darker cult themes that will eventually rear their head. The first act which sees the young couple middle class terrorised by a manic cult is truly unnerving – and Leonetti directs blending nerve-shredding suspense with manic bursts of violent horror. Further unsettling scares come in a basement-set sequence featuring demonic apparitions and faulty elevators. These inventive moments of horror (combined with the slightly more predictable haunted house theatrics) provide enough scares to engage both regular horror viewers and casual audiences.
Bringing some further conviction to this demonic tale is an able cast headed by Wallis and Horton, who add what slight depth they can to these somewhat empty characters. Supporting turns from Tony Amendola (as the token Priest) and the ever-excellent Alfre Woodard add some welcome character to the fold.


Whilst Annabelle may lean too heavily on the expected haunted house scares, this plucky spin-off still manages to conjure up enough unsettling and tense moments to engage.