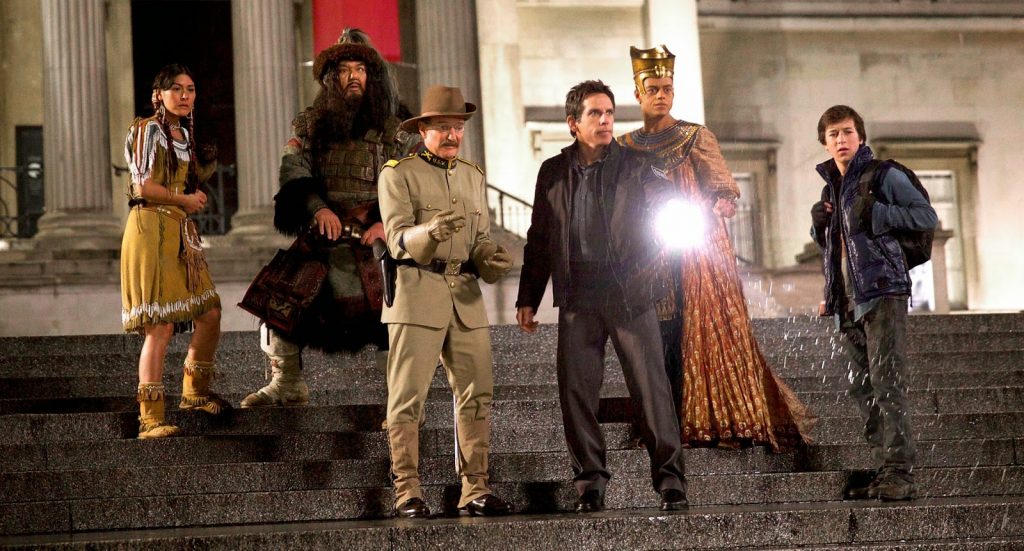 Despite the concept wearing thin by the second film in the unlikely Night at the Museum series, box office receipts stacking up to over $400m meant that a third film was always going to be on the cards. Series director Shawn Levy returns, alongside regular faces Ben Stiller, Owen Wilson, Steve Coogan, and the late Robin Williams for the relatively enjoyable Night at the Museum: Secret of the Tomb.

When the powers of a tablet that gives life to inanimate museum models begins to run dry, night watchman Larry Daley (Stiller) travels to London in the hope of finding a solution at the British Museum. He’s joined by his son Nicky (Skyler Gisondo), Theodore Roosevelt (Williams), Jedadiah (Wilson), Octavious (Coogan) and a variety of other colourful characters on this quest to restore the tablet’s power and save his friends.

In an attempt to restore some of the energy lost in the unnecessary second film, writers David Guion and Michael Handelman shift their narrative to London and introduce a selection of amusing new characters like Rebel Wilson’s badly-accented security guard and Dan Stevens’ manic Sir Lancelot. In doing so there is a little more variety to enjoy here – albeit the principal set up being inherently similar to the previous two films (chaos unfolding in a museum).

Levy keeps things incredibly light-hearted and continues to embrace the silliness of his film’s concept. A variety of set-pieces from an Egyptian set opening to plenty of chases through the streets of London (featuring an amusing scene with a host of museum pieces taking a bus ride through urban London). There are plenty of misfires to be found also – mainly the addition of a new caveman character called Laa (also Stiller), which proves more embarrassing than amusing. Ricky Gervais also remains an awkward presence here with his brand of humour never quite gelling with the whimsical feel of the Night at the Museum films.

Thanks to a game cast, it is easy to throw yourself into Secret of the Tomb. Stiller is a more than capable lead, but his character obviously pales in comparison to the larger than life supporting players. Coogan and Wilson have an enjoyable chemistry, whilst Dan Stevens is a welcome addition as the manically charming Sir Lancelot. Robin Williams gets some prominent featuring as the likeable Teddy Roosevelt (albeit there is little flamboyance he can bring to the role of a presidential waxwork) and Rebel Wilson amuses as an eccentric British security guard. However, most entertaining of all is the return of Dick Van Dyke’s Cecil – where we get to see the octogenarian icon strutting his dancing skills to Peaches and Herb’s 1978 disco hit Shake Your Groove Thing – worth the admission price alone, I’d say.

It’s hardly essential viewing, but nonetheless Night at the Museum: Secret of the Tomb is a likeable watch with sporadic moments of humour that will please adults and children.