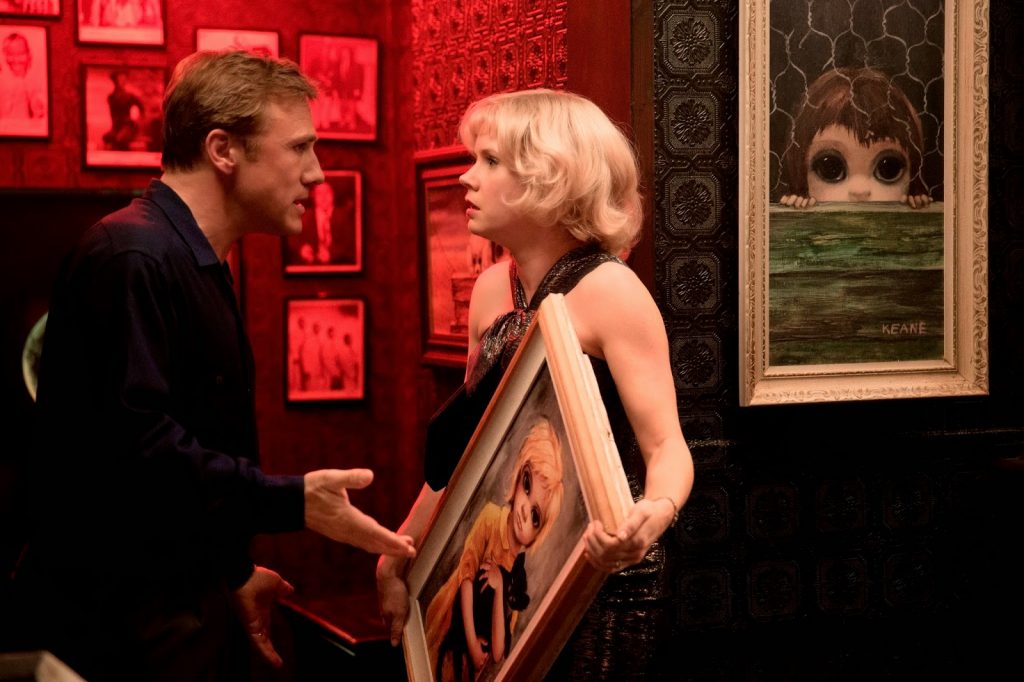 Tim Burton makes a striking return to form with Big Eyes – a project which asserts itself as his finest work since Ed Wood. Without regular collaborators Johnny Depp and Helena Bonham-Carter on hand, Big Eyes has an undeniably smaller scale feel which works wonders in its favour.

Based on the true story of painter Margaret Keane (Amy Adams) and her husband Walter (Christoph Waltz), this Scott Alexander and Larry Karaszewski (Ed Wood) penned project looks at the struggle behind the scenes of the popular big eyes paintings of the fifties. Big Eyes details the highly-publicised legal battles that followed when Walter began taking credit for Margaret’s works.

Part fifties melodrama and part kitsch gothic comedy, Big Eyes showcases Burton’s talent as a director without having to resort to domineering turns from Depp or multitudes of special effects. Armed with a simple story, talented performers, and his unique directorial vision, Burton has crafted an engrossing watch filled visual chutzpah and unrestrained character.

Doing what he does best, Burton follows an outsider hero that we can really get behind in the form of Amy Adams’ Margaret Keane. Margaret is a talented (yet unrecognised) artist living alone in San Francisco with her young daughter, where she falls for charming fellow artist Walter. Walter is zealous, charming and stability for Margaret, yet his darker side is far more interesting. Within Walter, Burton channels similar themes to Ed Wood – someone who wants so desperately to be lauded, but sadly lacks the needed talent. What follows is a dark exploration of the relationship between the artist and their work as Walter begins to take credit for Margaret’s increasingly popular big eyes portraits where with each lie Margaret begins to lose a deeply personal part of herself.

Burton’s trademark gothic visual palette is present, albeit in a slightly more muted fashion to some of his more recent high-profile projects. From garish bright houses of American fifties suburbia and lush green representations of Margaret’s later home in Hawaii, to the gothic soul of the big eyes – Big Eyes manages to represent Burton’s dichotomy between the light and dark. Burton’s darker creative stamp also rears its head, as the drained Margaret begins to see life imitate art as she eerily begins to see passersby in her famous big eyes style.

Big Eyes is often bleak. We get a real sense of the strain placed under Margaret by the controlling Walter thanks to a magnificent performance from Amy Adams. The actress captures the sweet vulnerability that lead Margaret into this controlling dynamic and the subsequent mental pressures which followed. Adams is perfect as the underdog who we route for every step of this journey, which makes the film’s court-based conclusion all the more enthralling. Praise should also go to Waltz who commits to the role of Walter with a manic energy and charm, blending a laugh out loud enthusiasm and also an unsettling darker side. Walter’s transition from perfect husband to mentally abusive controller is immaculately performed by Waltz.

Praise should also go to the gorgeous Lana Del Rey tracks that book-end the film, Big Eyes and I Can Fly, which are simply stunning.

As much as I harbour a deep and unexplainable love for his version of The Planet of the Apes, Big Eyes is Burton’s most fascinating work since Ed Wood – combing engrossing subject matter, outstanding performances , and expected visual excellence.