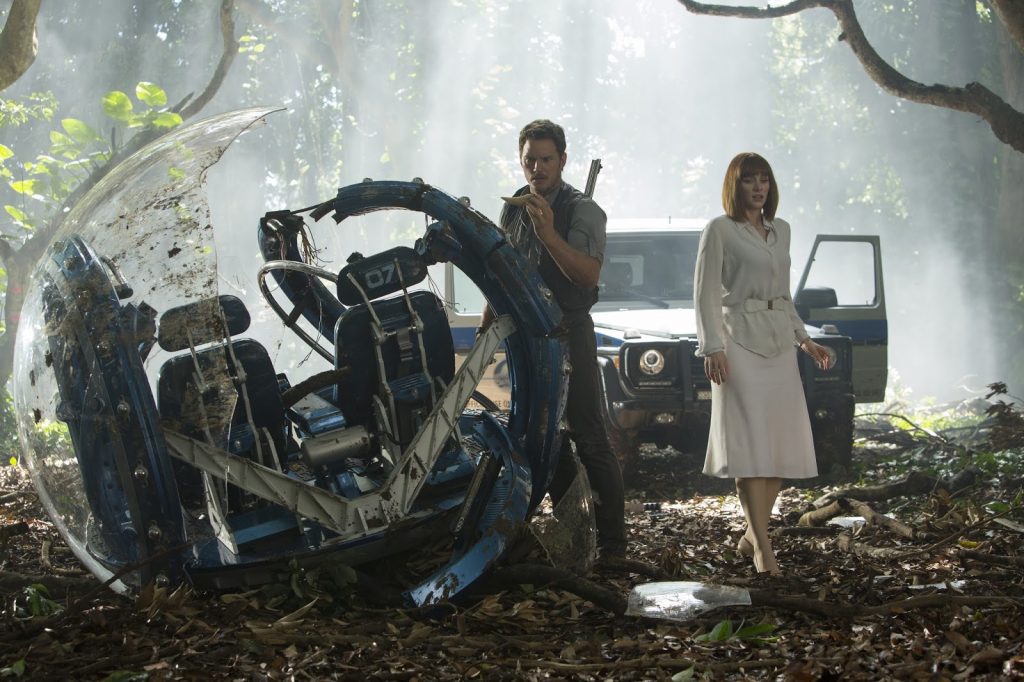 Jurassic World sees us make a welcome trip back to Isla Nubar, twenty-two years after the events of Jurassic Park. Whilst its narrative and effects never feel quite as innovative as Spielberg’s 1993 picture, director Colin Trevorrow has crafted a hugely entertaining Summer blockbuster filled with awe-inspiring visuals, grand set pieces, and strong new character dynamics.

Isla Nubar is now fully functional dinosaur theme park, Jurassic World, and has been for ten years. In a bid to raise attendance a new attraction is created – one that splices the DNA of other creatures. The result backfires tremendously sending the visitor-packed park into chaos leaving ambitious vice president Claire Dearing (Bryce Dallas Howard) and velociraptor expert Owen Grady (Chris Pratt) to fix things.

Several scripts for a fourth Jurassic Park film have been created since the release of third, with this having a particularly long and chequered production history. It’s no surprise to see that were four people involved in the screenplay for the finished product, the result is a film that unsurprisingly doesn’t deviate too far from the original 1993 hit, but nonetheless holds together incredibly well.

Jurassic World takes us to a fully functioning theme park, filled with guests and staff – and added threat. Trevorrow’s takes time to showcase that this is a park grand in scale, packed with visitors and state of the art attractions, so the subsequent escape and threat of the genetically modified dino hits with an earth-shattering horror. This is when Jurassic World takes on the traditional Jurassic Park narrative, simply becoming about people fleeing, then ultimately trying to defeat the deadly foe. This allows for Trevorrow to play with some high octane set pieces – from a number of chases (on foot, in vehicle, or in glass gyroscopes), to pterodactyl escapes and epic dinosaur battles.

Jurassic World is arguably the first film since the original to showcase the beauty of Isla Nubar thanks to stunning cinematography from John Schwartzman. When combined with iconic John Williams score, Jurassic World taps into that sweeping and grandiose charm and spectacle of the original film – something that no other blockbuster can recreate.

Chris Pratt takes over the reins from Sam Neill’s Dr. Alan Grant, bringing a roguish tough guy charm and warm humour to Jurassic World. Pratt’s Owen showcases an unseen dynamic within the franchise – the bond between man and animal (or dinosaur), which provides an interesting freshness to the Jurassic narrative (particularly in the last act). Bryce Dallas Howard excels especially when Claire is put in crisis and forced to step-up outside the office (even when wearing heels). There are also strong performances from Nick Robinson and Ty Simpkins as Claire’s nephews, whilst Jake Johnson and Lauren Lapkus add some fun comic relief. Irrfan Khan is a strong scene stealer as Hammond’s successor, bringing a gung-ho energy and fun to the fold as the CEO of the park.

Trevorrow’s film is nicely self-aware, so much so that it’s easy to forgive the masses of product placement in this bastion of ugly capitalist heaven that is the contemporary theme park. The usual points about man’s place in the food chain are reiterated here – as are the usual Jurassic angles about playing God (and things obviously backfiring). There are some welcome references to the 1993 original bound to evoke a cooing nostalgia in those that adored it. Sadly there’s no Sam Neill, Laura Dern or Jeff Goldblum flying in on pterodactyls to save the day. Inclusion of any of these original characters might have added some further pleasant continuity – just like the return of BD Wong’s Dr. Henry Wu does.

Arguably the strongest since the first film, Jurassic World is an outstanding blockbuster that delivers spectacle on a grand scale, despite the odd moment of predictability, we’re proud to say we love dinosaurs again.