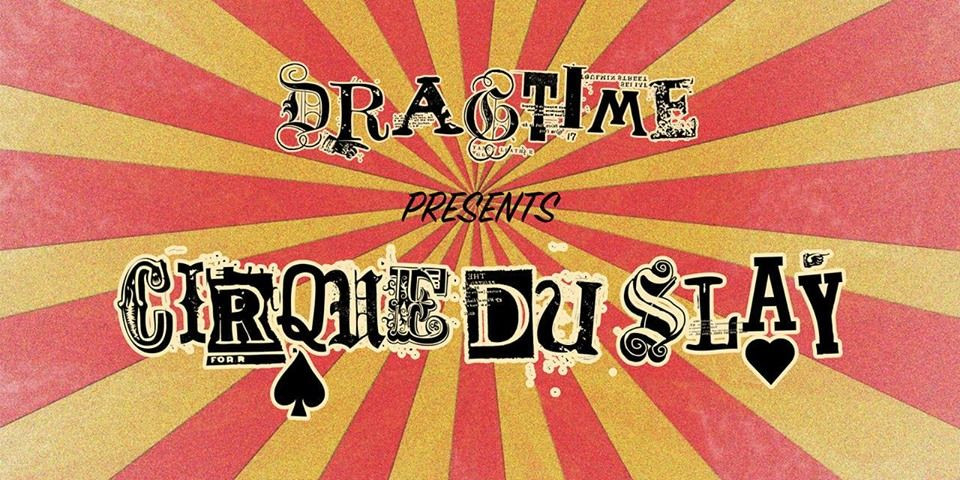 
Touring Cambridge-based drag troupe Dragtime venture to the Edinburgh Festival Fringe with Cirque Du Slay, an anarchic and eccentric drag variety show. What Cirque Du Slay lacks in polish, it makes up for in a rough and ready charm.

Among the acts to feature are MC and performer Persephone Porcelyn, singer/fortune-teller Maria Von Snatch, comic singer Ding Frisby, poet King Hoebron, lip-syncing from Charlene Collins and Burlesque from Kylie Gender. There is a real variety of performers to enjoy, each with an act that manages to maintain the gradually building momentum of the show.

Opening with a group performance to Lady Marmalade, Peresphone Porcelyn presides over the show with sharp one-liners and a joyously sarcastic manner – she keeps the show running smoothly with humour and engaging ease. Her own performances a What Ever Happened to Baby Jane? sampling lip-sync to I See Me from Death Becomes Her and a vocally impressive rendition of Lady Gaga’s Shallow are both amongst the show’s key highlights.

Comic singer Ding Frisby contributes an amusing number called Emotionally Strong Man exploring gender performativity and masculinity with a self-aware spin, whilst Maria Von Snatch’s musical numbers look at the seedy underbellies of Tory boys and Christian girls. A burlesque number from Kylie Gender set to Peggy Lee’s Fever brings further variety to the fold, whilst some gymnastics and old-school Britney lip-syncing from Charlene Collins keeps things ticking along. There is a profound moment of poetry from King Hoebron who explores the challenges queer people still face, using experiences in Cambridge and Edinburgh as the basis. This is quite a hard-hitting moment which received the wildest applause from the audience on Tuesday night.

There is a real sense of camaraderie between the cast of Dragtime – something highlighted in The Greatest Showman soundtracked finale performance. Whilst this drag can be a little rough and ready lacking the polish that many have come to expect from bigger budget drag shows, it has an anarchic scrappy charm that provides laughs, variety and a delightful sense of high camp.