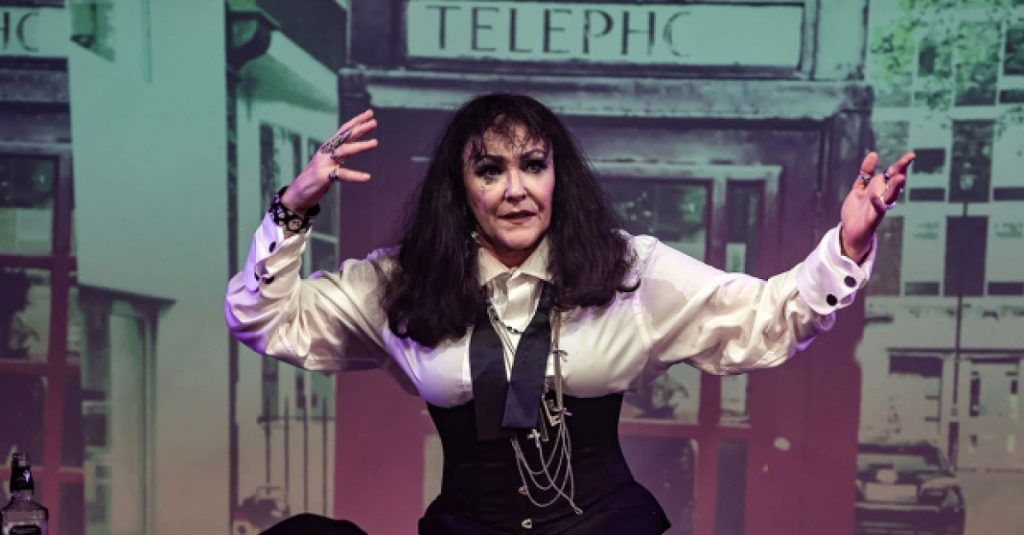 Frances Barber reprises her role as iconic rock star Billie Trix in Musik, a further collaboration with Jonathan Harvey and the Pet Shop Boys. The group previously worked on musical Closer to Heaven, in which Barber’s Trix served as a supporting character.

Taking the form of a cabaret show, Billie Trix tells us about her rise to stardom with six original songs from Neil Tennant and Chris Lowe advancing the narrative. Trix discusses how her life of excess started by leaving post-war Berlin and travelling to New York. Her time in Andy Warhol’s factory, her rise in the music industry, drug addiction, disco, motherhood and life in a Soho phone box make up some of the outrageous anecdotes shared by Trix.

Jonathan Harvey’s script is filled with showbiz anecdotes, with names dropped left, right and centre. Trix is a fantastic protagonist – unfiltered and obscene in her musings on life, love and art – and her peers in the industry (Madonna, Shania Twain, Trump, Nico, Andy Warhol, and countless others all come under fire from Trix’s outrageous musings). Barber delivers this with the glamorous punk attitude you would hope for, swigging a glass of Jack Daniels around the stage, she embodies Trix as the grande diva of the rock world: gravel voiced, cuttingly articulate and seething with acerbic and amusing venom – without a grain of modesty in sight.

Barber talks us through Trix’s life with a compelling frenzied conviction – firing out anecdotes left, right and centre. The actress brings a cutting grandeur and gravitas to the role in sharing her experiences such as leaving by boat for New York, giving Andy Warhol a very iconic idea, starring in an adult film, childbirth in Madison Square Gardens and rising to the top of the disco world. This is all delightfully kitsch, exuberant and high-camp humour that thrills and amuses throughout the full hour.

Collaborations with stars like Liza Minnelli and Dusty Springfield showcase how

incredibly the Pet Shop Boys work with female singers, and this magic is also worked with Barber and the six memorable synthpop tracks which interlace the narrative of Musik. These songs shine as musical creations, help build Trix’s status as a musician of iconic proportions, and advance the narrative. Opening number Mongrel is a touching glimpse at Trix’s early life and relationship with her parents, whilst Soup is a humorous number exploring how Trix inspired a famous Andy Warhol masterpiece. Run Girl Run is a synth-infused delight that captures Trix’s response to Vietnam and Ich Bin Musik perfectly encapsulates the height of the disco boom with shimmering synths – it is an undeniable standout. Barber shines in Friendly Fire a retrospective number where Trix recounts her career and delights with foot-stomping closing number For Every Moment.