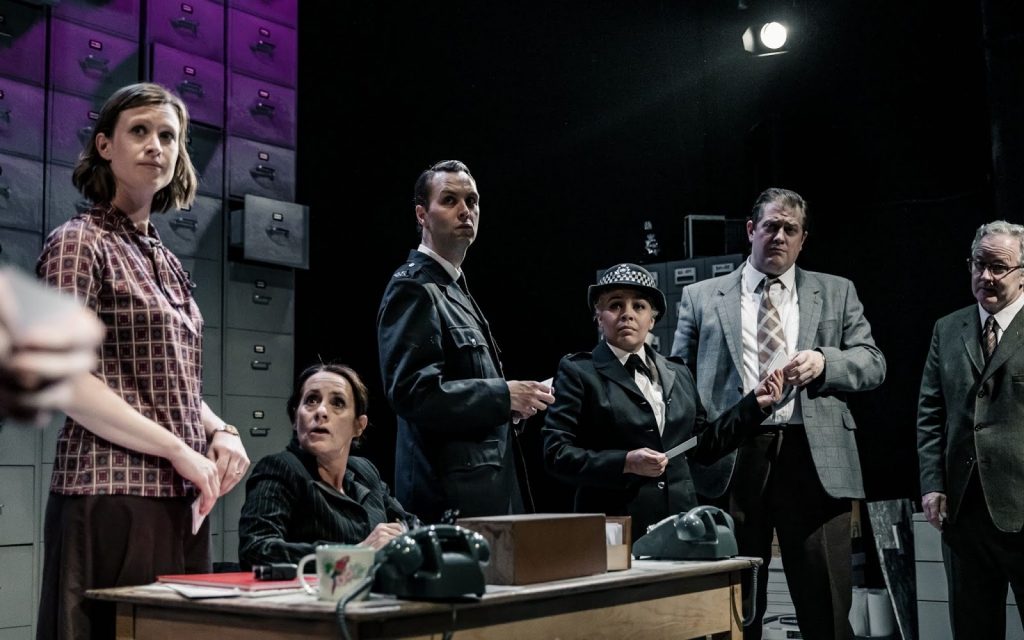 There has been a large feminist presence at this year’s Edinburgh Festival Fringe and this spirit feels present in The Incident Room from New Diorama Theatre. This absorbing thriller from Olivia Hirst & David Byrne explores the women at the heart of the Yorkshire Ripper Case from within the police incident room.

Set in 1975, The Incident Room takes us to the epicentre of the biggest manhunt in British history. Sergeant Megan Winterburn is working with several other officers to apprehend The Yorkshire Ripper amidst mass pressure from the press and public.

Hirst and Byrne have crafted a biting thriller than mounts up the dramatic tension with an intricate precision. Immersing us behind the scenes of the audacious police investigation, The Incident Room picks up with the West Yorkshire Police force attempting to centralise their investigation with Winterburn showcasing herself as dedicated officer persevering through her tireless work ethic. Yet as the case progresses Hirst and Byrne’s narrative tackles the sexism in the police force as less-effective male colleagues rise through the ranks and she is relegated to typing roles.

This sense of frustration powers through the narrative with events getting more pressurised and tense throughout as the murder rate increases and public hysteria mounts. The Incident Room gives sharp, informative depictions of the audacious methods the police force attempted to use: borderline legal interrogations, tracking cars via tyre tracks, putting “bait” in the form of a surviving victim and Winterburn being sent to a nightclub, and tracking marked bank notes. New Diorama use great imagination in depicting this with savvy, amusing protagonists – yet a sense of thematic depth in its storytelling and well-crafted characters.

Further plaudits should go to The Incident Room thanks to its impressive staging. The back of the stage is filled with sky high filing cabinets which videos and images are projected onto including pre-recorded visuals of paperwork being searched through or archive news footage chronicling the Yorkshire Ripper murders. These visuals projected onto the cabinets take a distorted style as the narrative tension mounts exploring the chaos of the case.

Performances from the game cast captures a sense of the hysteria that coursed through the nation, but it is those of Charlotte Melia and Katy Brittain in particular that tap into the emotional nerve of The Incident Room. Brittain shines in a dual role but is most impressive as the Ripper’s surviving victim whose life is changed by the new-found fame. Melia is outstanding as Megan Winterburn particularly as she is swept up in the inefficiency of her less-qualified superiors.

The Incident Room is a riveting look at the women behind the Yorkshire Ripper case with inventive staging, sharp narrative tension and intelligent performances.