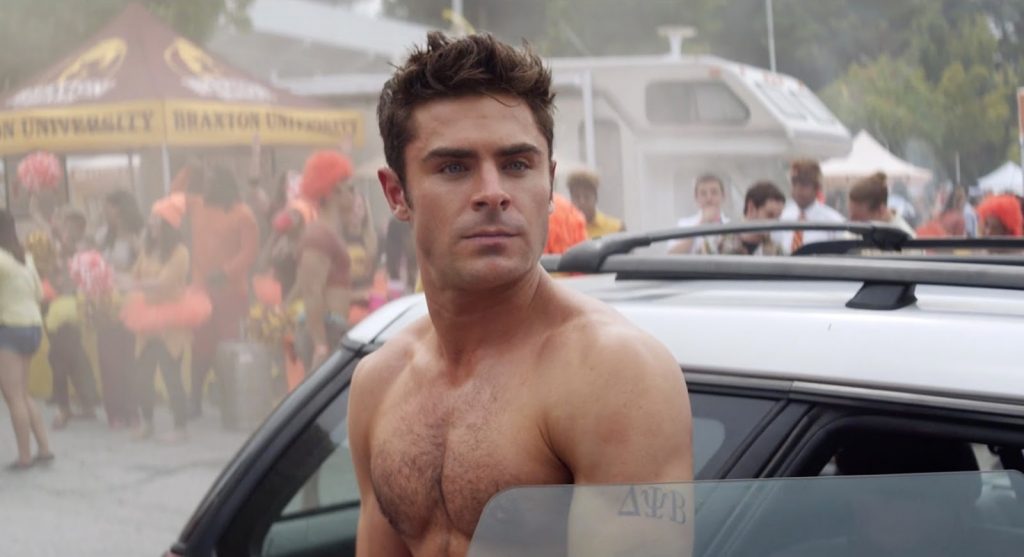 Undeniably enjoyable Seth Rogen and Zac Efron team-up Bad Neighbours might not have been at the front of our list for sequel treatment, but the resultant follow-up recaptures the R-rated charm of its successor. Playing to the strengths of the first film: mainly Rose Byrne’s wickedly sharp comedy skills, Rogen’s everyday man goofiness, and Efron’s charisma and physique, Bad Neighbours 2 ticks all the boxes required to make it a welcome comedy sequel.

Mac (Rogen) and Kelly’s (Byrne) hopes of selling their home are shattered when a troublesome sorority headed by the rebellious Shelby (Chloe Grace Moretz). When all hope seems lost the pair find an unlikely ally in former frat-boy foe Teddy (Efron).

Stylistically director Nicholas Stoller keeps proceedings on a familiar track to Bad Neighbours. There are the traditional neon-lit parties, elaborately set-up gags and a variety of mostly-successful one liners. The narrative framework stays near-identical with a few refreshing deviations chucked in the keep us on board, but mainly sticks to the Mac and Kelly vs. the students dynamic that worked in the previous film. There’s added fun in allowing Efron’s Teddy to switch sides allowing the actor to build the character into something a little more deep than the ‘hot frat dude’. Of course there is a certain repetition to be found in the general structure and dynamic, with your enjoyment of that likely to rest on how you responded to the previous film.

There’s something lightly-progressive feeling about Bad Neighbours 2’s deconstruction of brotherhood/sisterhood and the film rarely falls into the trap of embracing the sexist archetypes of the college film. In the premise of Shelby setting up her own sisterhood – not relying on glamorous parties and bro-baiting outfits – but instead creating a place where girls can feel safe. There’s no real commitment to this with a few bikini scenes and a leader in the form of the pretty Chloe Grace Moretz but there has been some effort made. Frat-boy dynamics get satirised too, with Teddy’s best friend Pete (Dave Franco) coming out and his team moving on to somewhat conventional post-college life.

Like most of Efron’s recent comedy vehicles (Dirty Grandpa, Bad Neighbours, That Awkward Moment, and the soon to be released Baywatch), Bad Neighbours 2 keenly celebrates the female and gay male gazes and continues this shift on how male stars are presented on-screen. An elaborate oiled dance scene builds on the eroticised way Efron is presented, whilst the young star plays this to fun comic effect with sheer gusto. This adds to the curiously progressive feeling surrounding Stoller’s film.


Bad Neighbours 2 is a comedy sequel that continues to build on the strengths of its predecessor. A mix of crass R-rated gags and smarter deconstructive satire on fraternal culture ensure there is plenty here to amuse, with credit also being given to a game cast – particularly Byrne and Efron.