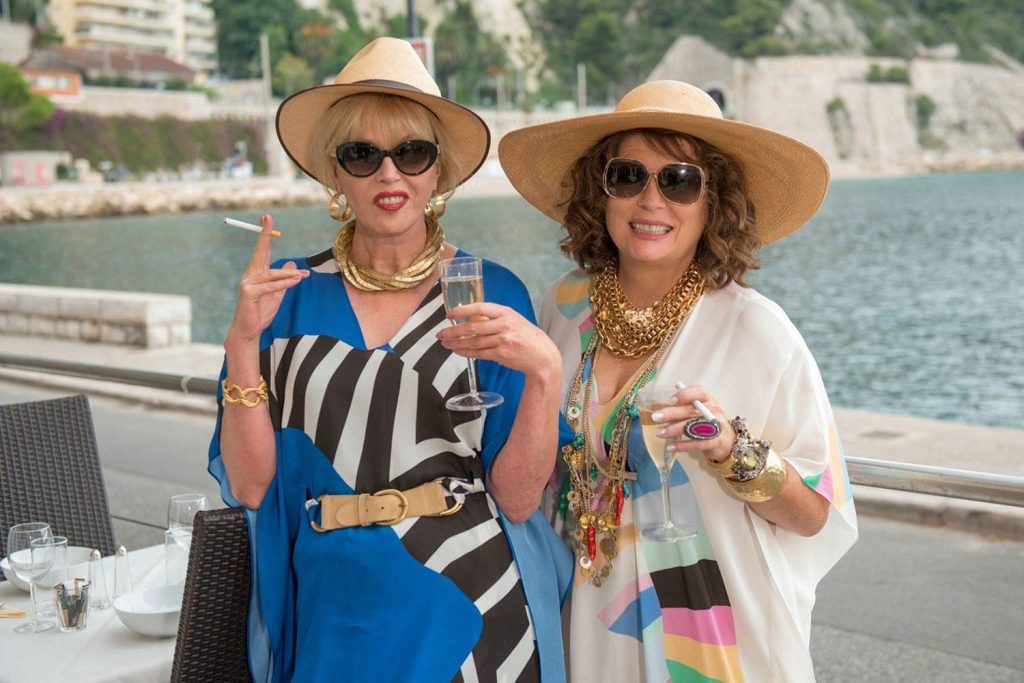 Adapting a television sitcom to film is not an easy challenge. Just ask Are You Being Served? and The League of Gentlemen. However, if it’s done well, the pay off can be marvellous. Just look at Alan Partridge’s big screen endeavour Alpha Papa. Sitting somewhere between these respective highs and lows is Absolutely Fabulous: The Movie – a semi-amusing celebration of the silliness, debauchery and glamour that made Jennifer Saunders’ original show such a triumph.

Written by Saunders, the cinematic update of the BBC series sees flailing PR woman Edie Monsoon (Saunders) and her heavy-drinking, salacious best friend Patsy Stone (Joanna Lumley) take to the South of France after accidentally playing a pivotal part in the drowning of Kate Moss.

Like many a sitcom turned movie, Ab Fab relocates the action to the South of France – a move that feels relevant and reflective of the original show’s love for glamour, as well as just a chance for Lumley and Saunders to appreciate the delights of said location. This is captured by director Mandie Fletcher and cinematographer Chris Goodger, who help elevate Ab Fab from sitcom to film with their impeccable production values. Whilst Saunders’ narrative isn’t exactly bolstered by the most original of structure – most of the film centres on glitzy parties filled with cameos and then a chase narrative throughout the South of France – within that there are plenty of the sharp jibes and wisecracks between Eddie and Patsy to allow us to be forgiving and modestly-amused.

Saunders utilises most of the show’s much-loved characters with good effect, with Julia Sawalha, June Whitfield and Jane Horrocks’ Bubble all getting healthy doses of screen-time amongst the barrage of cameos. However, it’s the friendship between Edina and Patsy that makes the Ab Fab Movie a worthy exercise. Saunders is still undeniably funny as entitled woman-child Eddie, whilst Lumley is breathtaking, venomous and commanding as the iconic Patsy. The spark between Saunders and Lumley is still very much there, despite the slight dip in the quality of material that a big screen outing tends to bring.

Moving outwith the confines of a thirty minute episode also comes with perils, showier locations usually mean an emphasis on set-pieces and an abundance of cameos. Saunders is guilty of both of these and whilst some of the cameos work well (Joan Collins, Rebel Wilson, Biggins, La Roux, Barry Humphries, Emma Bunton & Lulu), there are a little too many. Despite this, a welcome addition is Kylie Minogue with her new take on iconic Ab Fab theme, The Wheel’s On Fire.

Absolutely Fabulous: The Movie may not be as sharp and boldly amusing as the series, but there is much fun to be had watching the glamorous debauchery of Eddie and Patsy as they tear up London and the South of France.