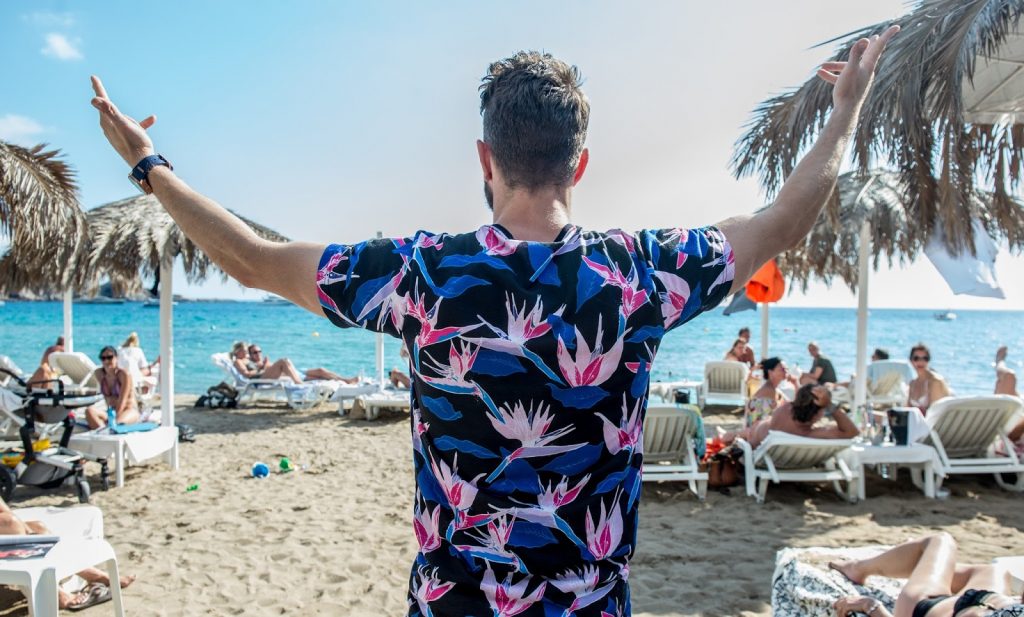 Alright geezers, are you ready for this review of new Brit-flick White Island? Benjamin Turner’s Ibiza set-crime thriller sees former Emmerdale heartthrob Lyndon Ogbourne chased through Ibiza by Darren Day with the result something of a poor man’s Carry On Abroad for the Essex Boys generation.

Ogbourne stars as Connor, a former Ibiza DJ working an office job in London, who is dragged back to the party island when he’s roped into a dodgy drug deal with two East End gangsters through a disastrous mix-up. Soon Connor is entangled in a battle between these British dealers and dealers on the island.

This light-hearted thriller will have a certain appeal to those fans of direct to video Britflicks and there are a host of familiar faces from British television that viewers may appreciate (Eastenders‘ Cheryl Fergison, Darren Day etc.) Although the setting of Ibiza provides a unique approach to this type of chase/caper narrative, it is not utilised well enough to help White Island break free from conventionality.

Colin Butts’ (Is Harry on the Boat?, Screwed) screenplay simply transports the London gangster film overseas – and although there is some pleasant cinematography of the island from Diego Rodriguez – White Island nonetheless feels like an all too familiar tale. There is no real investment in these characters: Connor doesn’t appear to particularly like his job, so the thought of him losing it due to his Ibiza caper does not lend too much narrative weight, whilst his best friend Dex (Joel Dommett) is the sort of guy that spikes his pal’s drink, so again, there is no concern when he gets imprisoned in a Spanish jail. Chuck in a forced romantic subplot between Connor and an islander and some rectum related gags from comic relief gangsters Barry (Owain Arthur) and Rik (Day) and you get a sense of the level White Island is operating at.

Character motivations – especially those that are played as twists, are clear from the onset, whilst Turner’s direction of the party scenes does not particularly sell them as exciting, glamorous or appealing. A saving grace does come in the form of Billy Zane’s supporting role as a figure from Connor’s past, allows the actor to deliver just enough back-story and charisma to add a certain sweetness to White Island. Dance music fans might enjoy an appearance from British artist Example.

There is not much here for the casual viewer, but admirers of the East End gangster film might gain something from White Island.