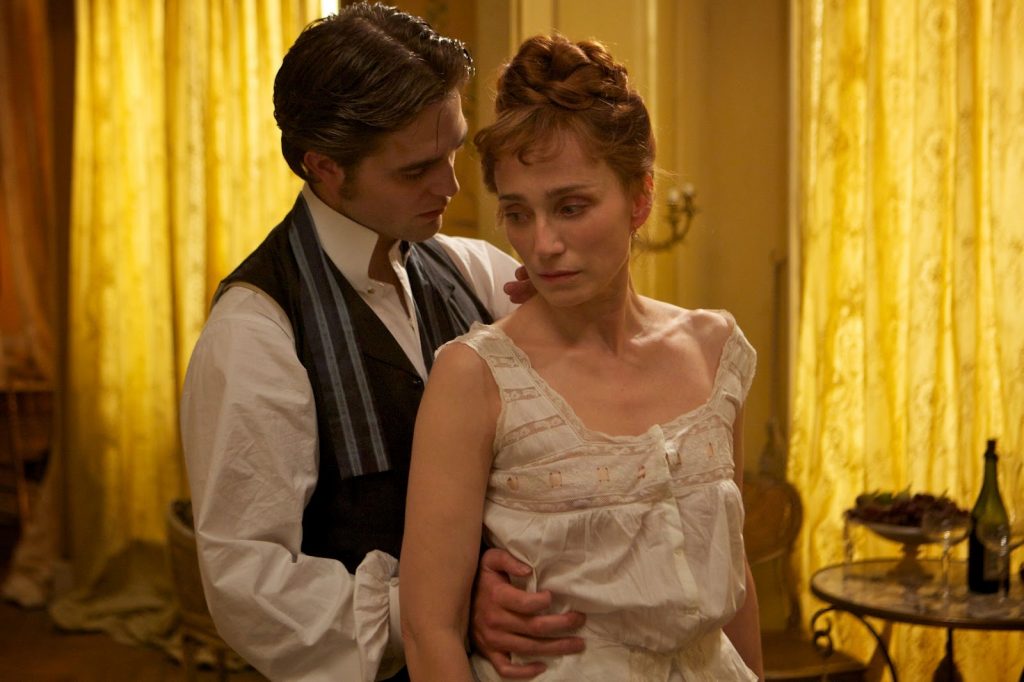 With the glorious return of the period drama through the likes of TV’s Downton Abbey and Upstairs Downstairs, it would seem that this format would be the perfect vehicle for rising star, Robert Pattinson. Just add in some sex and you have sure-fire box office gold. Bel Ami centres on
George Duroy (Robert Pattinson), a young returning soldier – climbing Paris’ social ladder, through his manipulation of three powerful women. Declan Donnellan and Nick Ormerod’s adaptation of Guy de Maupassant’s 1885 novel may look like your traditionally lavish period drama, but this is far more a case of The Age of Innocence meets Striptease.
Stylistically, Bel Ami delivers all the necessities of a period drama from a luscious setting (in this case 19th century Paris) to a grandiose score and dazzling costumes (that show more than a hint of cleavage). We’ve even got the actors trying to speak in rather posh accents (some more successfully than others), but there is something missing – a solid narrative. Bel Ami struggles from the Rachel Bennette penned screenplays’ repetitive structure – simply going from one of Duroy’s sexual encounters to the next. This later continues as we see Duroy’s standing decline as he loses each of the women one by one. This circular structure makes Bel Ami feel somewhat slow paced and void of any real spark or passion.
Regardless of these narrative issues, first time directors, Donnellan and Ormerod do an acceptable job at capturing the greedy, ‘filthy with money’ atmosphere of late 19th Century Paris. Given the raunchy subject matter, Bel Ami also gains a trashy feel – enhanced by some unintentional laughs. These come in the form of several lingering shots of bosoms and bodies, cringe-worthy sex sequences and some downright hammy performances and stereotypical characters.
Pattinson gets little opportunity to show off any varied range here – George Duroy is simply a bastard with no perception of empathy. Despite the fairly limited character, it still remains enjoyable to watch Pattinson in a darker role (“darker than a vampire, you say!”), smouldering his way through the bedrooms of Paris. Christina Ricci is also incredibly charming and convincing as Clotilde (one of George’s ladies), even if this role is somewhat poorly written. However, the real of joy of Bel Ami comes through supporting turns from Uma Thurman and Kristin Scott Thomas. Thurman hams her way through the piece (and is the source of many of these unintentional laughs) as Madeleine, who spends a lot of her time thinking out political theories whilst rolling about in her bed in a ball-gown. Scott Thomas also appears in this campy role of a woman, besotted by George – this overacting is hugely entertaining to watch.
Bel Ami is surely a case of style over substance, delivering on the lavish period details but falling short through its repetitive narrative. The hammy performances and cringe-worthy sex scenes give the film a trashy value, that might leave you thinking “that was awful, but I had a bloody good time”.
RATING: 3/5