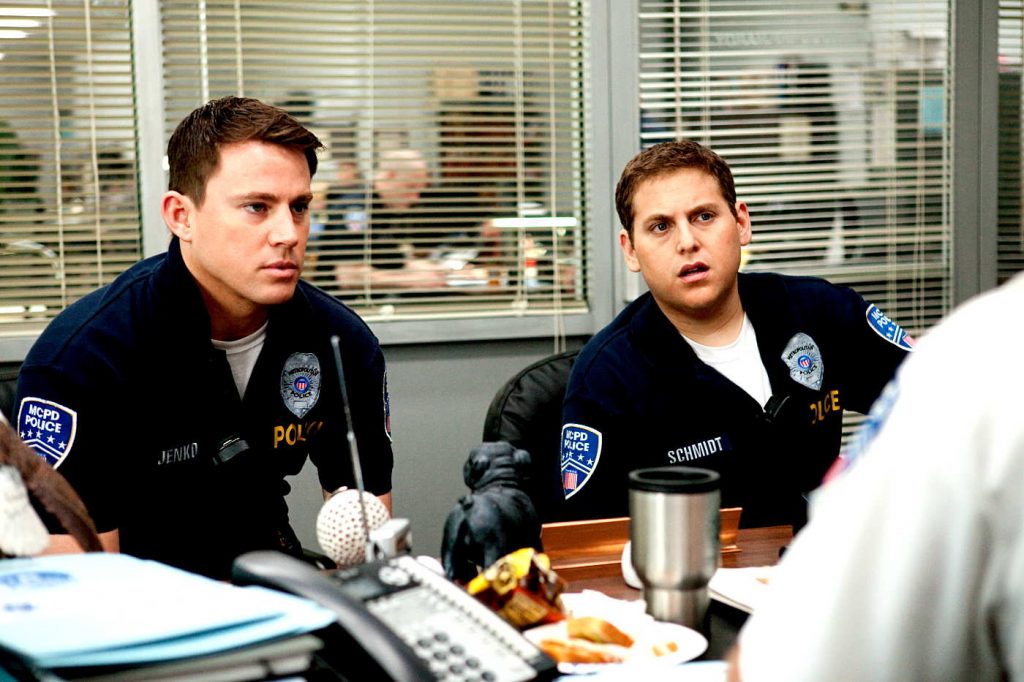 In an age where cinemas are filled with remakes, reimagings and reboots, the team behind 21 Jump Street have been careful to avoid falling into the category of simply ripping off a classic idea. Instead they take the concept behind the TV series and have added a fresh R-rated comic twist. Michael Bacall’s screenplay pays homage to the traditional buddy cop comedies of the eighties and nineties – even poking fun at some of the clichés (ie. the duo expecting ever-frequent explosions). The combination of these buddy cop elements with the high school comedy allows for many fish-out-of-water laughs – mainly through seeing how school life has changed since the cops were still there – with Tatum’s character exclaiming “I blame Glee!”

The laughs come thick and fast throughout, if you do not get one, there is another on it’s way that you will get. There are also some genuinely hysterical moments including one unforgettable drug-induced sequence which is surely a rival to last year’s comic tour de force – the dress fitting scene in Bridesmaids. The comedy is truly crude, dumb, but absolutely hilarious, likewise is its plethora of fun action scenes.

One of the main pleasures of 21 Jump Street is the ingenious pairing of screen-hunk Channing Tatum and comic hot property, Jonah Hill. The dynamic between the two is perfect – with Tatum appearing at complete ease, showing a strong comic flair and excellent sense of timing. Likewise does Hill, who is highly entertaining to watch – it’s hard not to laugh as he pushes an old woman into a stack of shoeboxes or hi-jacks a car dressed as Peter Pan.

There is also a host of wonderful comic supporting roles from the likes of the handsome and incredibly funny, Dave Franco who stars as the school’s eco-warrior/drug dealer. Also on top form is Ice Cube as the self proclaimed ‘stereotypical angry black chief’ – this is by far his finest role and a genius piece of casting. There are also smaller, yet equally magnificent turns from Ellie Kemper (Bridesmaids), Rob Riggle (The Other Guys) and Parks and Rec’s Nick Offerman. 21 Jump Street also comes equip with a cameo that rivals the unexpected brilliance of 2009’s Zombieland Bill Murray appearance.

Every so often you watch a film, where you genuinely do not want the cinematic experience to end – 21 Jump Street is exactly one of these films, I was left hungry for more. 2009 had The Hangover, 2010 had The Other Guys and 2011 had Bridesmaids – now 21 Jump Street is the must see comedy of 2012.