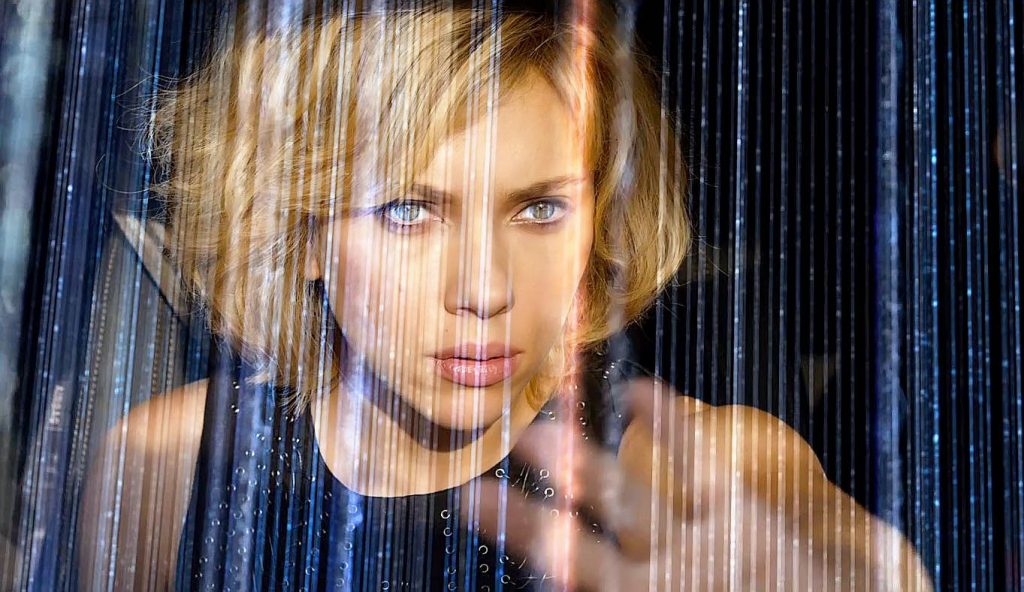 Scarlett Johansson stars as Lucy, a woman who gets roped into smuggling CPH4 – mysterious new drug, by shady Korean crime boss Mr. Jang (Min-sik Choi). However, after the drug leaks into Lucy’s system she begins to utilise full control of her brain (Besson plays with the dated concept that humans only use 10% of their available brain power here) – unleashing abilities which she never knew existed. Lucy escapes to Paris and meets with Professor Norman (Morgan Freeman) – whose research may be the key to saving her – however, Jang and his men are hot on her tail.

Besson’s recent trend of presenting American megastars causing chaos in France (see Robert de Niro in The Family, Kevin Costner in 3 Days to Kill) hits a new high in his collaboration with the ever-excellent Johansson. The actress dominates the screen as the somewhat ditzy blonde whose sleazy boyfriend tricks her into delivering a mysterious briefcase and ultimately results in her super-human transformation. Johansson is one of the most engrossing actresses working today – commanding audience attention no matter what the role. Convincing in the film’s action and as the dehumanised super-human – Johansson is magnificent throughout.

The French filmmaker’s narrative is filled with dodgy ‘science’ that attempts to justify its unhinged, yet fantastically entertaining premise. However, none of this matters as its delivered in such a way that it feels entirely real – from Morgan Freeman’s absorbing lectures about the uncapped power of the human brain (intercut with trippy silent thematic visuals of the animal kingdom) to Lucy getting to grips with and understanding her new abilities. This great theme combined with engaging action and special effects adds to the undeniable charm and appeal of Lucy. Punchy set-pieces like Lucy driving a Parisian police car through lanes of oncoming traffic or Korean gangsters battling it out with the heroine in a hospital entertain despite their lack of originality.

Lucy is at its most entertaining however, when it breaks through the constraints of the conventional action thriller. Seeing Lucy’s powers evolve through increased access to all recesses of her brain makes for an ambitious and unpredictable watch – especially in the final moments when the heroine’s powers stretch back to the beginning of creation.

Lucy is the most entertaining of this year’s crop of Summer blockbusters. Besson has created a ride which is fantastically silly, yet continually impresses through its ambition and moments of fun spectacle. However, Johansson is the heart and soul of Lucy and is utterly magnificent here. It should also be noticed that Besson’s film is refreshingly short at a punchy 89 minutes.