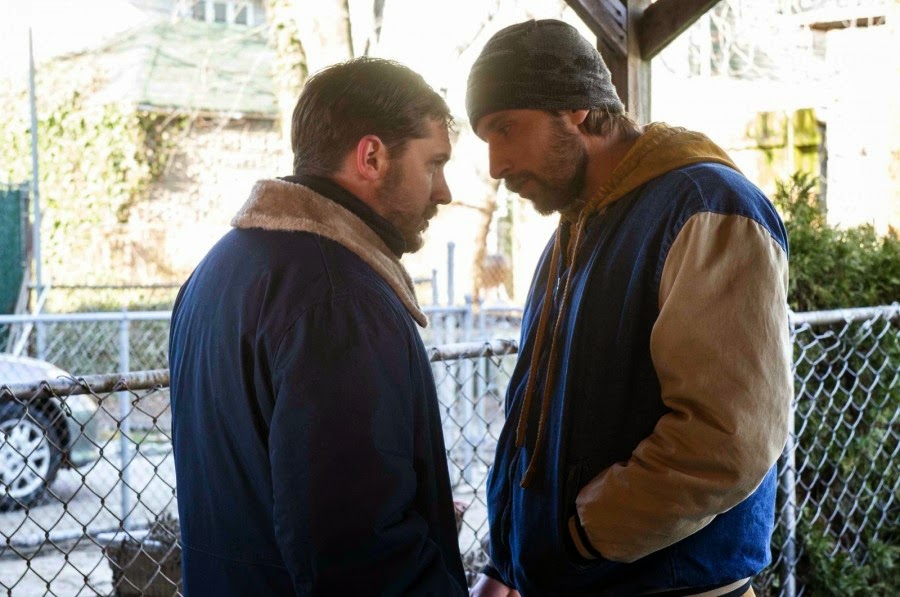 Tom Hardy stars as Bob Sagowski a soft-spoken barkeep, who alongside his boss-cum-cousin (James Gandolfini) runs Cousin Marv’s which doubles as a drop bar for money-laundering criminals. After said money is stolen in an armed robbery, the bar becomes the subject of an investigation which brings the neighbourhood’s past to the forefront.

Not reliant on heavy set-pieces, Dennis Lehane’s narrative is a bustling character piece with an emphasis on brooding atmosphere. These richly crafted characters ensures that The Drop is intense and consistently engaging throughout – none more so than central protagonist, Hardy’s Bob. Not a typical character that one might see in this genre, Bob may look like a tough guy but with his shambling body language, lack of conversation, and soft-spoken yet principled demeanour – he is something of an enigma. Hardy is perfectly understated in the role, channelling this soft hesitancy (highlighted in the charming relationship with he and an abandoned puppy throughout) and a darker intensity in this dark, unsettled crime-laden blue-collar landscape.

Roskam crafts an atmosphere of uncomfortable paranoia throughout The Drop as we see the various criminal goings-on that thrive beneath the neighbourhood surface. From Cousin Marv’s double-dealings with various rent-a-thugs to Bob’s new-found friend Nadia (Noomi Rapace) being stalked by her ruthless ex-boyfriend (the ever alluring Matthias Schoenaerts) – there is a bustling underbelly of criminal activity to raise suspicions here. Roskam fills The Drop with a slow-burning tension which builds to the film’s hard-hitting, blood-soaked conclusion.

This is the sort of film that truly showcases the talents of its cast – serving as the late James Gandolfini’ swan song, this is an outstanding performance for the actor to leave us with. Capturing the hefty charm and gruff gravitas that made him a household name, Gandolfini enthrals as the deadpan Marv. Relegated to a supporting role, Noomi Rapace is not treated to the same development as Hardy’s Bob – yet breathes as much enthusiasm into the ultimately-vulnerable female-lead. Matthias Schoenaerts continues to prove himself as a dynamic talent as low-life Eric Deeds – a man so cruel as to torture an adorable puppy.

Surprisingly understated, yet filled to the brim with brooding atmosphere and masterfully crafted characters, The Drop is another success for Roskam.