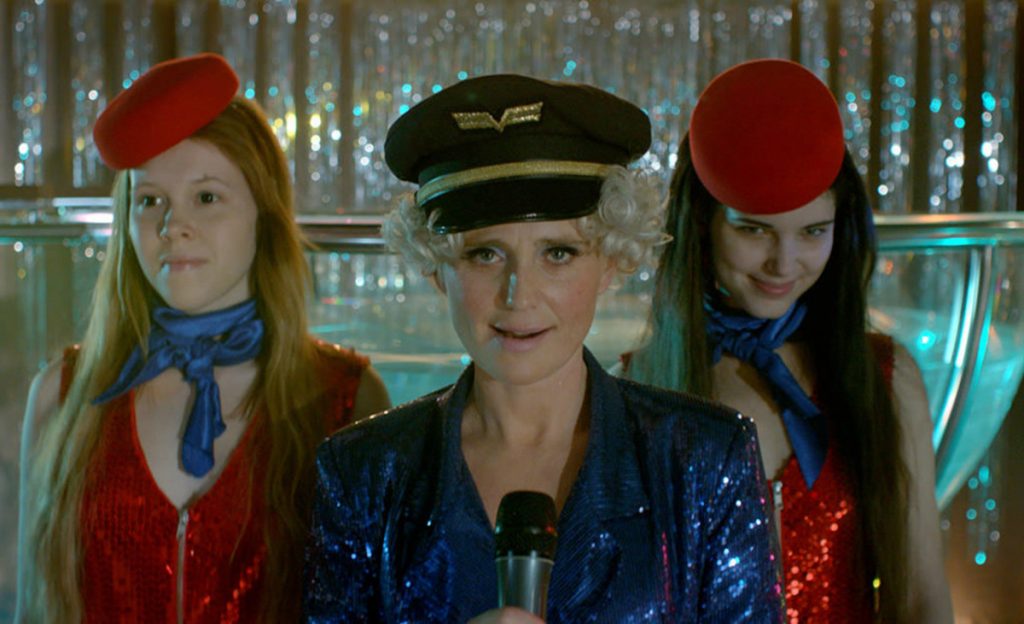 Polish fairytale The Lure is quite unlike anything else to be shown at this year’s Edinburgh International Film Festival or well, anywhere. The project from director Agnieszka Smoczynska and writer Robert Bolesto is the world’s first eighties-inspired mermaid musical horror – and mostly lives up the fun suggestions of that premise.

The eighties-inspired house band of a seedy nightclub bring two mermaids ashore and promptly give them roles in their act. Conflict begins between the mermaids, Silver (Michalina Olszanska) and Golden (Marta Mazurek) as one falls for a human and the other struggles with suppressing her desire to eat male flesh.

If like myself your knowledge of Polish music is based on their annual Eurovision entry, you might be forgiven for thinking that The Lure would be a drab affair soundtracked by stodgy folk music or gushing ballads. The opening of The Lure does not do much to dissuade from that preconception as the mermaids sing a sultry song to lure the male band members to them. However, something truly magnificent happens that completely changes the tone of The Lure as we get to our first scene after the titles – band leader Wokalistka (Kinga Preis) starts belting out a disco-tastic cover of Donna Summer & Giorgio Moroder’s I Feel Love. It quickly becomes apparent that The Lure’s musical preferences lie towards synth and electronic pop; and when paired with rhinestone-clad costumes and energetic dance routines, the tone of Smoczynska’s film transcends into one of fun and camp, with some lashings of horror genre nastiness.

These musical numbers vary in quality, but most are fun and catchy – even to an English speaking audience. A song and dance number in a clothes shop and Silver and Gold’s debut performance in the club are just a couple of the musical highlights. Smoczynska ensures these musical numbers always mirror and continue The Lure’s narrative tract.

Bolesto’s screenplay is a unique beast – one that has fun with the little-explored mermaid subgenre of horror films ensuring to balance the high camp musical spectacle with some gory nastiness and suspense. There’s something quite gruesome about the mermaid aesthetic – capturing the sheer horror of a giant slimy fish tail attached to a human – therefore the mermaids as such are never glamorised despite their pretty upper halves. This paired with set-decoration and costumes that echo those of humble, former-communist nations makes for a curious aesthetic that certainly lends a unique visual appeal to The Lure.

The final act of Bolesto’s narrative can drag as the love-story takes precedence and the musical numbers strike a sombre note, meaning that The Lure ends on a low – this is not enough to damage the unique earlier appeal of Smoczynska’s film, however.