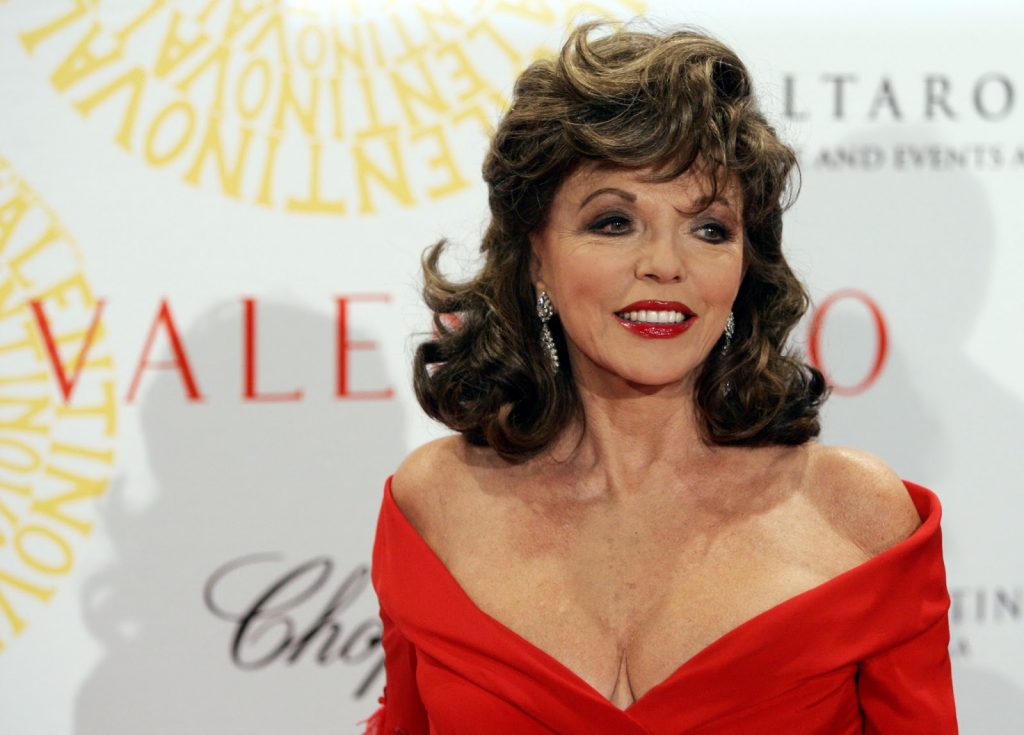 10. Joan Collins Took On Random House
Publishers Random House took Joan to court in the 1990s, after claiming her book was unpublishable and demanding their $1.2 million advance back. The trial was broadcast on Court TV and thank God, as we got to see Joan messing with the Random House lawyers. And let’s be honest, you would read a book by Joan Collins called Hitler’s Mistress, right?

9. Joan Collins Doesn’t Put Up With Shit
Beware snidey journos who question Joan’s unparalleled literary skills, she is not in the mood for your shit. After rounds of press for her latest iconic literary sensation, Star Quality, 2002 saw the star snap back at a cheeky journalist. Virginia Woolf could never.


8. Joan Collins Can Even Piss Santa Off
Between her early Hollywood roles and her iconic eighties Dynasty career, Joan spent a lot of time redefining British B-Movies. This resulted in Joan’s holy trinity of horror classics – Tales From The Crypt, Empire of the Ants and I Don’t Want To Be Born. The first of these sees Joan as a woman, who murders her husband, but is in-turn stalked by a demented escaped asylum patient dressed as Santa. This is horror at its trashiest, and completely surreal seeing Joan tormented by that evil bastard, known as Santa Claus.

6. Joan Collins Can Fight Ants
No one can fight giant paper mache ants like Joan Collins as seen in iconic B-movie, Empire of the Ants. Meryl Streep could never.


5. Joan Collins is a Pop Icon
Joan Collins is so talented that she makes John Lennon seem like a flop. Just listen to this sensational and suitably dramatic interpretation of the former Beatles’ hit, Imagine. Let us just be glad that John was not around to hear Joan make his career completely redundant.

4. Joan Collins is a Country Music Icon
The Dynasty icon should not be limited to the genre known as ‘pop’, Joan does country too. How do you make the gayest soap opera of all time even gayer? Well the producers of Dynasty answered this by giving Joan a toe-tappingly camp musical number. Still not gay enough? Fine, let’s make it a country update of a Marlene Dietrich song about boys in a ‘backroom.’ That’ll do nicely.

3. Joan Collins Likes a Boogie with her Hollywood Pals
Forgotten TV movie, These Old Broads, saw Joan star alongside Debbie Reynolds, Shirley MacLaine and Elizabeth Taylor. This is a true explosion of glittering camp that culminates in an all-singing/all-dancing finale, as the glamorous divas belt out ‘What a Life.’ It’s gayer than a Golden Girls Marathon at Dale Winton’s house.


2. Joan Collins Gave Us The Greatest Reality TV Show Ever Made
Joan is generally far too classy to step her perfectly manicured feet into the murky waters of reality television. However, on the rare occasion that she likes to embrace this trashier medium, she does it Joan Collins style (aka fucking amazing). 2009’s Joan Does Glamour saw the flawless diva venture out to deal with the fashion crises that cripple British women. We see Joan venture to Sainsbury’s where she spreads her fashion wisdom to a variety of unsuspecting middle aged women, dishing out lines such as “I’m not being rude, but fleece should be on sheep.”

1. Joan Collins IS Dynasty
The two words are synonymous – no one thinks of iconic megasoap Dynasty without thinking of Joan Collins as scheming villainess, Alexis. Joan helped define a decade and bring strong female characters to the forefront of primetime television. Watch her battle camp icon, Diahann Carroll, you bitch!