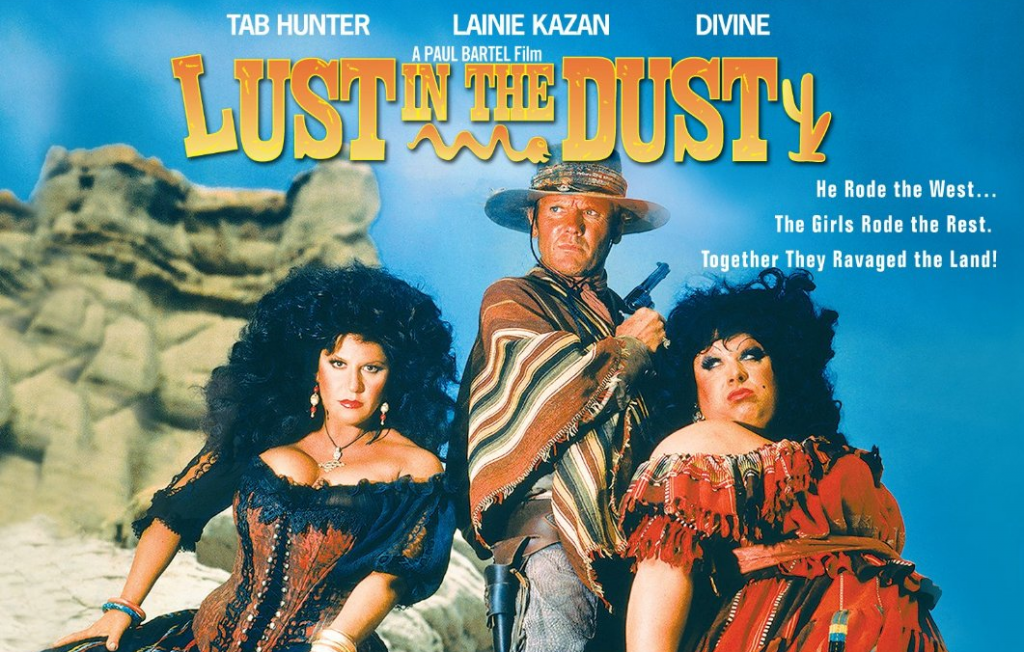 Those like myself who have spent years worshiping at the feet of The Pope of Trash, John Waters and his holy sister, the late great Divine, will be delighted to see that Lust in the Dust is being released on DVD for the first time in the UK. Whilst not a Waters project, the film stars the director’s Polyester alumni, Divine and Tab Hunter, as well as regular B-Movie stars Lainie Kazan, Henry Silva and Cesar Romero.

Directed by Paul Bartel (the man behind Death Race 2000), Lust in the Dust follows an aspiring saloon singer, Rosie Velez (Divine), who is stranded in the desert and rescued by a quiet yet deadly gunman (Hunter). The pair arrive at the saloon of Marguerita Ventura (Kazan) in the town of Chilli Verde where they are roped into a hunt for missing gold.

Despite the obvious connections to the work of John Waters, Bartel’s film is far safer and less controversial than any of the cult Baltimore director’s work. The humour is less subversive and less crude, serving up more raunchiness and slapstick than the delightful trash of Waters’ back-catalogue. If willing to abandon these inevitable comparisons, then you will you have a cracking good time with Lust in the Dust.

Whilst many of his early critics dismiss Divine as a grotesque three-hundred pound drag queen, Waters’ fans will know that Harris Glen Milstead could act. Divine never plays a cross-dressing man, but strong women – independent and proud, serving as a wonderful example of Divine’s power as pioneering performer, capable of launching a subversive attack on Hollywood gendering, whilst simultaneously putting on a riotously fun show – exactly as he does here. Showcasing a full breadth of talents, Divine gets to belt out saloon musical number, These Lips Were Made For Kissin’ (to which the feisty Mrs Ventura notes; “You sing like you look!”), as well as releasing a Hi-NRG update of Frankie Valli’s Walk Like a Man out with the film.

Divine is the driving force behind Lust in the Dust as Rosie, the character that we all want to see on-screen, with the star providing countless one-liners like “It’s always the little ones with something to prove,” after being propositioned by a dwarf. Considering Divine’s larger than life status, the feisty Lainie Kazan does a solid job acting opposite the performer, in an equally flamboyant and entertaining role as brothel madam, Marguerita. In fact, it is the pairing of Divine and Kazan that is one of the strongest elements of Bartel’s film, with both stars delivering quick witted quips back and forth in several mini Western duels of wits. Slightly outstaged by his two leading ladies, Tab Hunter delivers low-key laughs as a tough-talking, Clint Eastwood inspired gunman.

Bartel chocks Lust in the Dust with plenty spoofs of the classic Western (its title serves as a play upon a long-standing nickname of Duel in the Sun), as well as clever dialogue that fully utilises the exuberant personas of Divine and Kazan. Whilst the narrative lacks any particular depth (proceedings can get a little chaotic and confusing towards the conclusion), the sets and characters fully transport us back to the days of the classic Hollywood westerns that this film so lovingly pays homage to. If America was making Carry On flicks in the 1980s, they would look a little like this.

There is a certain sadness in Lust in the Dust – whilst serving as a showcase to Divine’s talents, it also serves as a reflection of a career that could have fully broken through to mainstream Hollywood – sadly cut too short after Divine’s passing days after the premiere of his biggest hit, Hairspray in 1988.


Originally posted on The People’s Movies. Check it out!