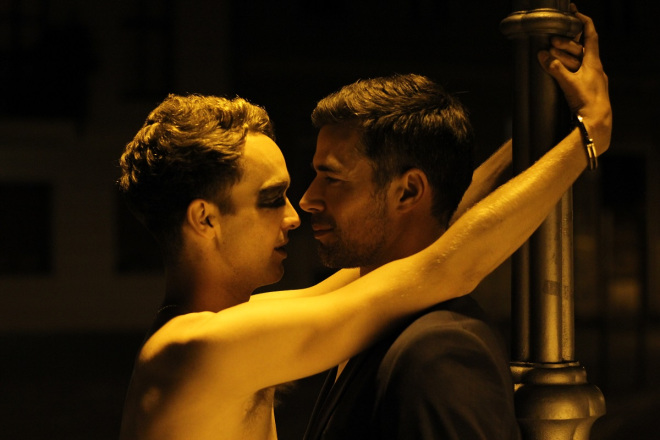 Mark Wilshin writes and directs his debut feature film, Sodom. The film was released on home video in the UK in 2018 from TLA and is currently available to stream on Dekkoo. Sodom explores questions of connections, self acceptance, sexuality and the unfortunate shame which sometimes accompanies these traits in queer relationships.


The narrative sees twenty-year old footballer Will (Pip Brignall) stranded, handcuffed naked to a lamppost in an unnamed European city during his stag-do. He is rescued by dashing former pianist Michael (Jo Weil), with the pair returning to Michael’s apartment for a nightcap. The spark and initial attraction between the men turns sexual, but something deeper lingers, causing Will to question himself and the choices he has made within his life.


Wilshin crafts a subtle and delicate atmosphere over the proceedings, capturing the quiet romance of the European street in the dead of night – whilst the rest of the city sleeps, the romance between Will and Michael is very much burning. This is captured in Beniamino Barrese’s stirring cinematography and through the romantic dimly-lit interiors of Michael’s apartment. These almost secretive locations (empty streets, Michael’s swish accommodation) help craft Michael and Will’s relationship as something special, yet discreet and unseen by the rest of the world – acting as a savvy parallel to Will’s sexuality.


Being the sole actors on screen throughout Sodom, Brignall and Weil manage to captivate and gently draw us into the natural, tender relationship between our protagonists. Although their connection is one that turns sexual somewhat quickly, Wilshin handles it with elegance and sensuality, allowing Brignall and Weil room to showcase a natural chemistry and warm rapport. Brignall’s excellent performance channels Will’s internal struggle – presumably coming from a typically laddish background and marrying young – he carefully explores the pressures and fears of coming out in such an environment. Yet as the laddish facade slowly dissipates we see a man simply embracing an enchanting romantic connection with another.


Weil is similarly excellent as Michael who has lived a more ‘open’ gay lifestyle yet is still somewhat shrouded in mystery. He has almost numbed to romance, suffering with the grief of the death of a prior relationship – yet he regains a spark through his connection with Will. Both actors deliver magnetic and inherently touching turns that showcase Sodom not only as a queer story, but a universal glimpse at self-acceptance.


With echoes of Richard Linklater’s Before trilogy in its entrancing dynamic, Sodom is an impressive quietly emotional piece, beautifully performed by Brignall and Weil and intelligently crafted by Wilshin.

Sodom is available to stream on Dekkoo.