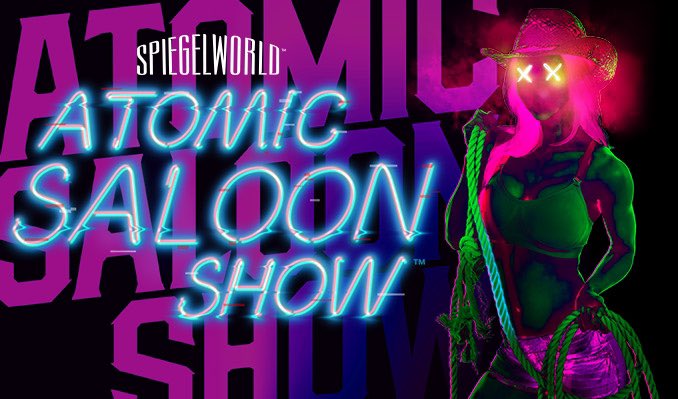 With its promotional posters of neon-clad cowgirls and the attention grabbing title of Atomic Saloon Show, this is an attraction that undoubtedly grabs your curiosity and deservedly so. This debauched Wild West variety set is a high-octane raucous delight that boasts a wicked sense of humour, mesmerising performance routines, and a stirring party atmosphere.

Madame Boozy Skunton’s saloon is home to a troupe of the West’s most unusual entertainers – aerial performance artists, pole dancers, gymnasts, singers, comedians and just about anything else you can think of in-between.

Opening as a debauched Wild West party – foul-mouthed Madame Boozy introduces us to some of the performers and provides sharp-tongued comic interludes with her potential love-interest The Reverend. Our first performer sets the debauched tone (if the bread rolls being thrown into the audience by the show’s troublemaking Irish twins had not already done so), a singing cowboy delivers a sultry country number ‘Eatin’ Pussy and Kickin’ Ass’. It’s crude, silly and will immediately help you identify whether this show is for you.

Our handsome cowboy is followed by a range of spectacularly impressive gymnastic work from the ensemble cast of similarly aesthetically pleasing performers. An incredible routine using hula hoops from Madame Boozy’s second in command Fanny is jaw-droppingly impressive, whilst two aerial displays from a mysterious buff gunslinger (the first set to Bon Jovi’s Dead or Alive, the second to John Newman’s Give Me Your Love – with very little clothes, a homoerotic delight) similarly impress and sets the party atmosphere of Atomic Saloon Show alight.

Atomic Saloon Show delights in its willingness to have fun and embrace tongue-in-cheek naughtiness. The Irish twins showcase a stellar display of tap-dancing and a mesmerising hand-slapping routine to Britney Spears’ Work Bitch, whilst two nuns that saunter around the proceedings deliver big laughs with a ping pong ball routine set to Army of Lovers’ Crucify. There is further debauched hilarity in skits between Madame Boozy and The Reverend, whilst pole dancing routines showcase the impressive physical finesse and skill possessed by these performers.

Blending circus skills with this Wild West aesthetic creates a unique theatrical experience. With pulsating neon lights, an energetic dance soundtrack, and some delightfully silly on stage behaviour – Atomic Saloon Show is an assault on the senses. This is a show that will be a firm festival favourite.

★★★★★
Tickets for Atomic Saloon Show are available on the EdFringe website.