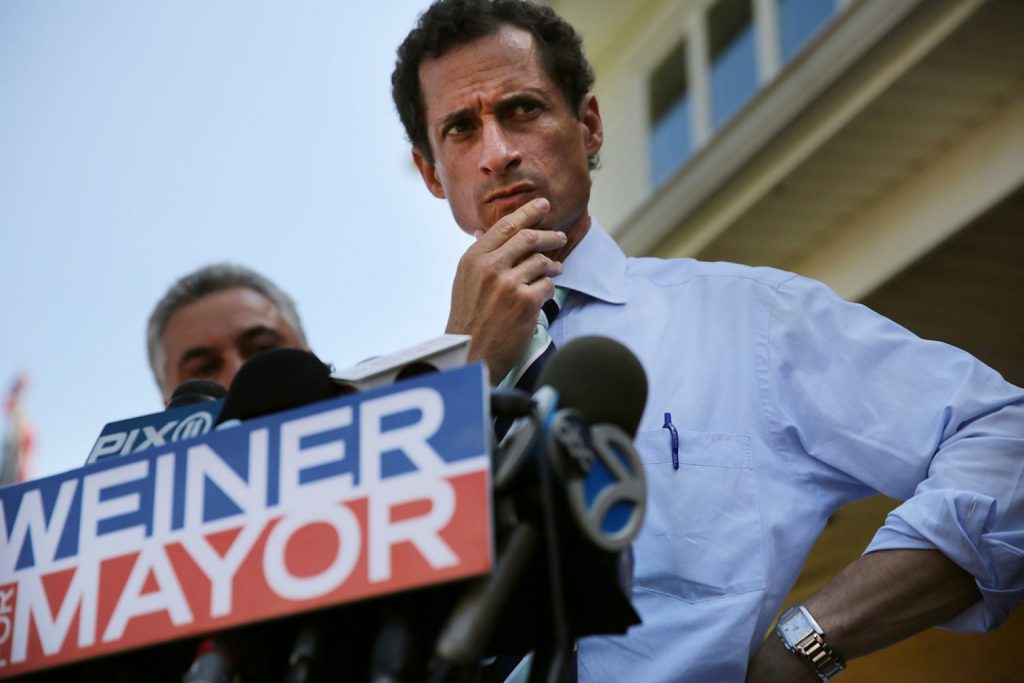 Josh Kriegman and Elyse Steinberg’s fly on the wall documentary follows seven-term congressman and primary mayoral candidate Anthony Weiner – a man plagued by unshakable scandal that some have dubbed ‘Weinergate’. Kriegman and Steinberg chronicle Weiner’s fall from grace and subsequent return to politics in the form of a bid for New York’s Democratic mayoral nomination, amidst two sex scandals.

Weiner opens by capturing the politician a his fiery best – debating in congress with an unrepentant gusto – a fearless political fighter, before subsequently discussing his resignation for sending a lewd bulge picture to a Facebook admirer. Weiner’s political ambitions are presented with righteous pride – he’s a man of the people with the ability to work a crowd – juxtaposed with his regrettable personal exploits. Kriegman and Steinberg do not linger on the initial sex scandal for too long, instead swiftly moving on to Weiner’s bid for the Democratic nomination for mayor of New York in 2013.

Although the filmmakers do not need to dwell too much on the initial scandal, it soon becomes apparent that this is a spectre that haunts Weiner throughout his entire campaign trail. Kriegman and Steinberg capture the highs and lows of Weiner’s campaign. Weiner is an energetic look at the titular politician and if it were not for this repeated scandal, there is a sense that he could have gone even further in the US political system. We are rooting for this man – especially after he’s given a second chance by the public. Weiner is undoubtedly a likeable, yet flawed figure here. In capturing him attending various marches (Gay pride, African pride etc), it’s clear that the politician has a spark that people respond too and one that subsequently placed him as a favourite for the Democratic nomination – but as stated, Weiner also tackles the lows and a major blow followed in the second chapter of the politician’s sex scandal.

The tone of Weiner dramatically changes upon the announcement of a further development in his sex scandal – the arrival of Sydney Leathers. After Leathers sells her story, we see the public perception of the politician reach a new low (he’s described as having an “80% unfavourability rating”) and drops ten points in the polls. We see vitriolic responses from the public, heckling from TV commentators and political opponents – yet Weiner remains an endearing firebrand – albeit a repentant one. It’s this fighting spirit mixed with an undeniable regret that makes the politician such a fascinating documentary subject. Similarly there’s a an admiration in Kriegman and Steinberg’s depiction of Huma, the politician’s wife and long-standing aid to Hilary Clinton. Like his political exploits, Weiner’s marriage is one of ups and downs and it’s interesting to witness the strain of his affairs on this relationship.

Weiner also raises questions about the accountability of politicians – should his personal life have any bearing on his political credentials? There’s also a sense of the general ennui experienced by the press’ hunger for salacious details – especially when on the campaign trail. Added pressure comes in the form of never knowing when to expect a new scandal to crawl out the woodwork.

Weiner is a remarkably interesting glance into one of the world’s most documented sex scandals. Kriegman and Steinberg craft an experience that gets to the heart of its subject showcasing how scandal can derail a political campaign.