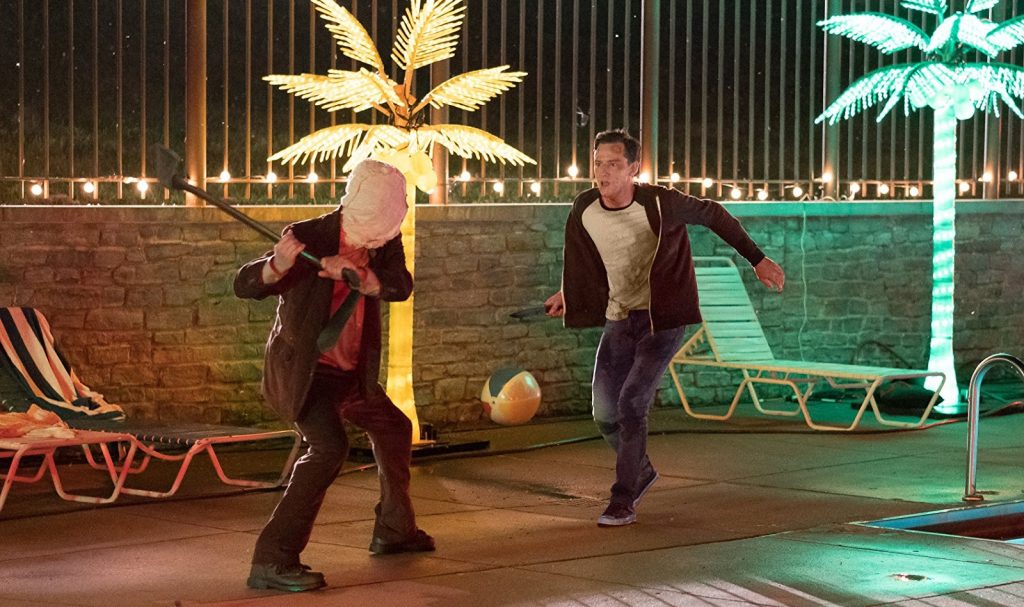 If The Strangers was reflective of the lingering dread of seventies horror cinema (echoes of Last House on the Left and The Town That Dreaded Sundown fill the 2008 film), its sequel a decade later represents a very different aesthetic – that of pulpy neon-tinged eighties cinema. The Strangers: Prey at Night plays out like the first film’s rebellious little brother who has discovered cocaine, synthpop and neon lighting. Just as ruthlessly brutal, yet with a new sense of style, The Strangers: Prey at Night is one of the finest horror sequels in recent memory.

Johannes Roberts (The Other Side of the Door) directs this sequel, with original writer-director Bryan Bertino now on co-writing duties with Ben Ketai. Prey at Night follows an American family spending at a night at an isolated rural trailer park, who become the targets of a group of sadistic killers out to cause as much bloodshed and chaos as possible. Christina Hendricks, Martin Henderson, Bailee Madison and Lewis Pullman make up the film’s cast.

Shifting the setting to an empty trailer park (at night, of course) creates a landscape that is eerily atmospheric – and endlessly unsettling. This dry ice-filled park gives our psychopaths a large expansive playground and allows Roberts to play with the rural sense of abandon that made the first film such a thrill-ride. Our victims have plenty of places to hide, yet never feel quite alone – packed with similar shots of lingering ‘Strangers’ and provocative use of shadow and lighting gives the continual impression that we’re never safe. Yet this expansive rural setting is paired with a wonderful retro eighties’ aesthetic from neon palm trees lighting the outdoor pool (which makes way for one of the film’s prestige set-pieces) and camera work that favours slow paced zooms capturing character’s sheer panic.

Prey at Night takes the approach that bigger is better and fills itself with larger set-pieces, more gore and more nostalgia – whilst this doesn’t leave the lingering dread of the original film, it helps craft a bombastic and high energy horror sequel that entertains throughout. The use of a eighties’ pop soundtrack provides a self-aware wink implying that this is a film not necessarily taking itself too seriously – Kim Wilde’s Kids in America and Cambodia, Bonnie Tyler’s Total Eclipse of the Heart, and a few other well know eighties’ favourites inject further fun into the macabre proceedings.

A cast headed by Christina Hendricks gives the film a welcome credibility – and whilst Hendricks is not the lead, the actress makes a lasting impression as a maternal scream queen – despite being deserving of a little more screen time. Martin Henderson brings a Southern charm as the family’s patriarch, whist Bailee Madison and Lewis Pullman prove well cast young leads – capturing their character’s terror with a grounded sincerity. Our trio of villains are as unsettling as they were in the first film – with the unknown nature of their motives being the real source of the film’s horror.

The Strangers: Prey at Night is an undeniably different beast to its predecessor, yet this turns out to be a good thing. Charged with a nostalgic energy and tense direction, Prey at Night, thrills with its self-aware charm and unabashed brutality.