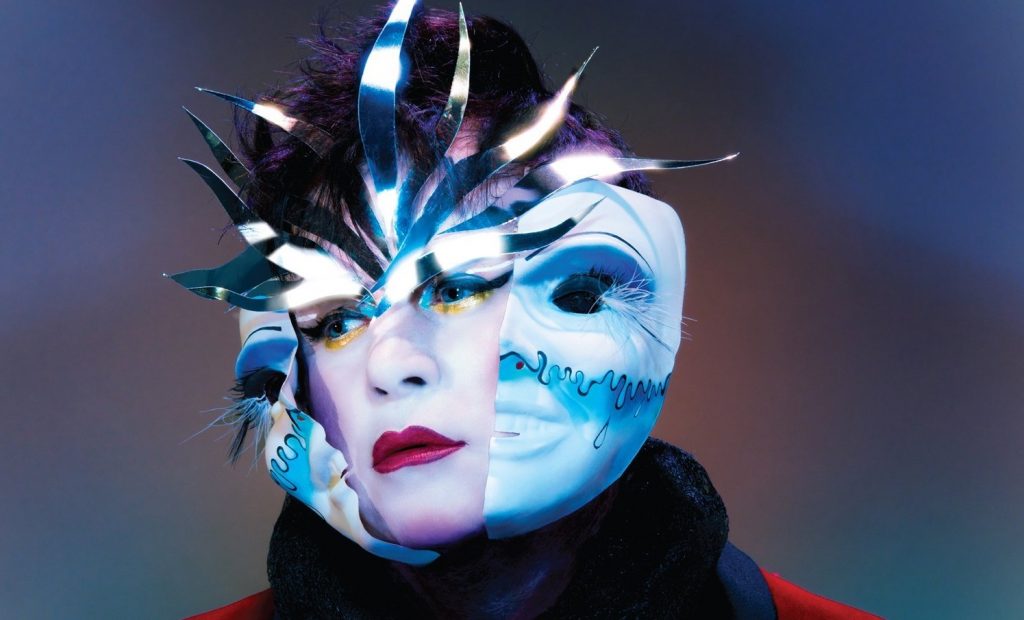 We were incredibly fortunate to be given an early listen to synthpop pioneers Visage’s first album since 1984’s Beat Boy. Much to our delight, Hearts and Knives is as spectacular as you would have hoped – fusing the Steve Strange-lead band’s distinctive electronic New-Wave sound with contemporary dance and electro-pop.

Hearts and Knives opens with pulsating dance number Never Enough, showcasing some hypnotic synth-backed production with slick guitar hooks. Never Enough promptly reminds us that despite their twenty-nine year hiatus, Visage are still the best at what they do. This throwback to eighties electronic dance music is likely to be one that listeners will find themselves continually revisiting.

Moody electronic track Shameless Fashion seamlessly captures the feel of classic Visage (with most of Hearts and Knives being produced on eighties recording equipment), yet still retains a contemporary edge. Shameless Fashion pays homage to Visage’s biggest hit Fade to Grey, with a spoken segment similar to its predecessor’s French opening. The track features Strange’s biting lyrical edge capturing the ever-changing nature of the fashion industry – as channeled through belting chorus ‘We’re in fashion…Shameless fashion.’

From the sharp keyboard on the onset, She’s Electric harks back to the golden days of British electronic music. The track carries on with a soft-electronic bassline that results in a dreamlike atmosphere. Strange’s vocals are haunting when set against the backing chants of ‘One…..Two…..’

The fusion of Strange and vocalist Lauren Duvall’s vocals are at their most apparent in the chorus of rock-tinged number Hidden Sign. This combination produces a hypnotic, almost Human League-esque sound. However, the highlight of the track is Strange’s powerful spoken-segment about the trials and tribulations of a relationship set against moody electronic backing.

This slow-building track opens with the musical gravitas that one might expect to see in the opening of Stanley Kubrick’s 2001: A Space Odyssey. Here the pace slows down and truly allows us to reflect on the beauty and poignancy of Visage’s music, showing us that the group are equally gifted at crafting thoughtful electronic-ballads as well as upbeat dance-numbers.

Dreamer I Know is likely to be an immediate favourite for listeners; complete with slick upbeat production, a catchy chorus and inventive lyrics (‘While you were sleeping, I had a vision, the jelly took the pain away’). This is a sweeping, electronic-pop number that would make a terrific second single for the band.

Perhaps one of the more experimental tracks on the album, Lost In Static, is a difficult one to forget. Striking a similar pace to On We Go, the lyrics discuss returning from isolation back to the world with stirring lines like: ‘I’ve been lost in static for some long, its hard to know.’

The eighth track from the album is a belting synthpop number that speeds up the tempo of the album, yet takes it in a darker route with Strange channeling the persona of an obsessed stalker. I Am Watching sounds like classic Visage and would feel at home on the band’s first two albums.

Diaries Of A Madman

Featuring sharp-beats, powerful guitar-backing and Steve’s confident vocal delivery, Diaries Of A Madman is one of the strongest tracks on Hearts and Knives. The track captures the blurring lines between ‘madness’ and ‘genius’ boasting an empowering message at its heart.

It’s a huge pleasure to say that Hearts and Knives is well worth the wait. It’s a true tour de force for the band and their finest album since their debut in 1980. Everything down to the album’s Peter Ashworth shot-artwork screams classic Visage, reminding us that once again Visage is simply not just about music, Visage is about artistic experience. Hearts and Knives’ slick electronic production, the unparalleled vocals of Steve Strange and the album’s inventive lyrics firmly remind us that Visage are still at the top of their game. Let’s hope that this is the first of many further Visage albums!

You can pre-order Hearts and Knives on Visage’s official site and Amazon UK. The album is available from Monday the 20th of May 2013.