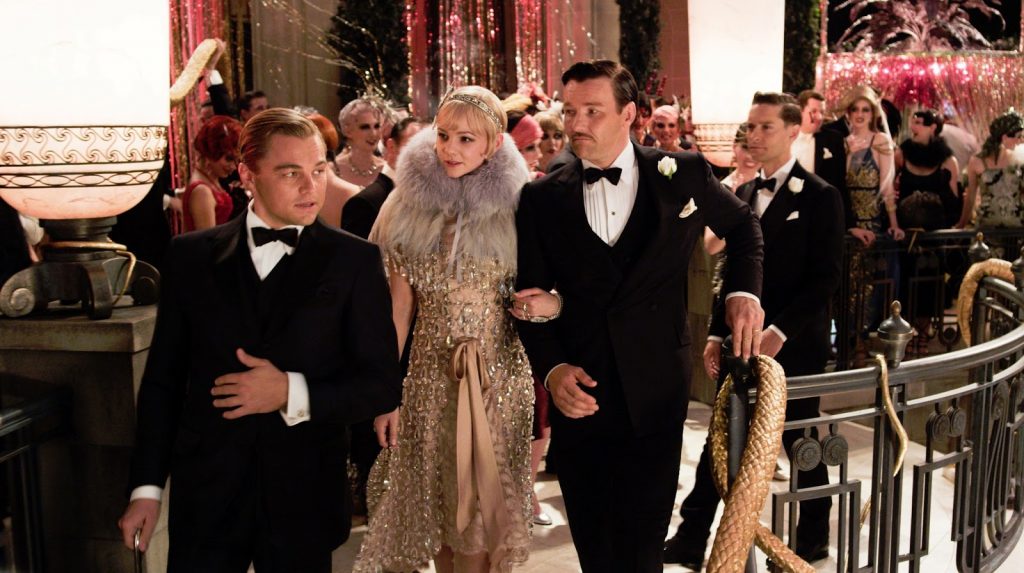 After the sweeping melodrama of Baz Luhrmann’s Australia, the director returns with an adaptation of F. Scott Fitzgerald’s The Great Gatsby. Whilst the feature is a visual triumph that captures the decadence of the roaring twenties, it lacks the narrative strength and heart befitting of its source novel.

The Great Gatsby follows Nick Carraway (Tobey Maguire) as he recounts the trials and tribulations of his neighbour – elusive millionaire, Jay Gatsby (Leonardo DiCaprio). Carraway soon learns that behind Gatsby’s decadent lifestyle, lies the desire to be reunited with his first love, Daisy Buchanan (Carey Mulligan).

Baz Luhrmann is the perfect filmmaker to capture the glamorous decadence and corruption of the roaring twenties – just think of the madness of the Moulin Rouge and the sparkle and camp of Strictly Ballroom. The sheer visual spectacle of Luhrmann’s film is astounding – showcased through whooshing camerawork, lavish costumes, grandiose settings and heightened through Shawn ‘Jay Z’ Carter’s energetic contemporary soundtrack. This spectacle is at its most exuberant in the portrayal of Gatsby’s high-flying lifestyle from frenzied parties to his fast-paced trips in his souped-up, yellow Duesenberg II.

However, the visual decadence and splendor of Gatsby is hampered by an occasionally weak narrative that suffers from rapid changes in tone. The energy and excitement of Gatsby’s lifestyle is paralleled with a variety of exceedingly drab dramatic scenes which abandon Luhrmann’s distinct style, and whilst DiCaprio remains magnificent throughout – his performance is the only thing that holds viewer’s attention in these sequences. Gatsby is frustrating – it verges from moments of sheer brilliance to others of mild boredom.

The Jaz Z produced soundtrack is one of the defining elements of the film. The energetic dance numbers of will.i.am’s Charleston-infused Bang Bang and Fergie’s A Little Party Never Killed Nobody propel Gatsby with a sense of high-energy, whilst Bryan Ferry’s enchanting jazz version of Love Is the Drug and Lana Del Rey’s Young and Beautiful pack Luhrmann’s film with an emotional edge whilst retaining Gatsby’s vintage overtones.

DiCaprio’s sublime performance as Jay Gatsby is also one of the driving forces behind the impact of Gatsby. The actor encapsulates the sense of mystery behind the elusive Jay Gatsby, gradually unveiling his human qualities as the film progresses. DiCaprio’s co-star Carey Mulligan is a pleasant addition as Daisy Buchancan – a role in which she appears to channel the soft-spoken starlets of classic Hollywood cinema. Tobey Maguire fares less successfully as Carraway, with awkward line-delivery and a disconcerting wide-eyed demeanor.

There are moments of sheer brilliance in Baz Luhrmann’s The Great Gatsby from DiCaprio’s sublime performance to the highly energetic visuals and flawless soundtrack. However, the occasional shift in tone results in some shakier dramatic sequences. Although for the most part The Great Gatsby is pretty brilliant.