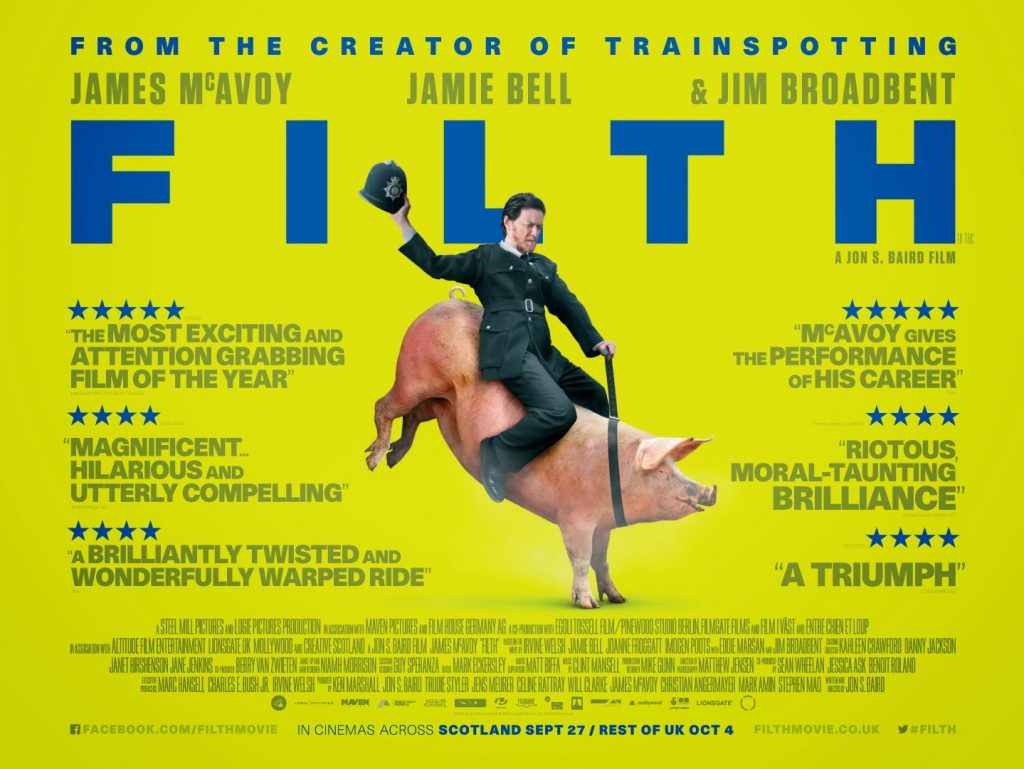 Jon S. Baird’s cinematic adaptation of Irvine Welsh’s Filth may not be as controversial as the hype would suggest, but it is certainly a stylish and electrifying watch packed with a darkly comic edge.

Bigoted, drug-loving, and sex addicted Edinburgh policeman Bruce Robertson (James McAvoy) sets out to undercut his colleagues in order to gain a promotion to Detective Inspector. However, it is not long before the corrupt Bruce’s own vices will jeopardise his aim.

James McAvoy leads Filth with a ferocious performance that is likely to be dubbed the standout of his career. There is a subtle charm and appeal behind the utterly repellent Robertson, showcased through sly glances to the camera and his manipulative backstabbing. He makes for a enthralling protagonist, with McAvoy gradually showcasing the damage that Bruce’s vices and weakened emotional state behind the tough guy facade.

Baird directs with a quirky, vibrant style packed with outlandish flashbacks and amusing visual titbits – many of these showcasing Bruce’s skewed representation of his colleagues or hallucinations whilst on drug trips. This distinct flair combined with the grey Edinburgh setting makes for a highly original combination and helps Baird capture Bruce’s depravity and ugly-charm with a sense of twisted humour and wit.

Perhaps this wry humour is one of the reasons why Filth never truly shocks or offends. Ultimately the film feels somewhat safe and controlled. Repeated sex-scenes, cocaine snorting, and aggressive slurs may offend more sensitive viewers but to hardened cinema audiences, well, we have seen it all before. Nothing in Filth shocks to the same extent as an underground classics like Pink Flamingos, but it certainly makes a valiant effort.

Filth also contains some of the strongest supporting performances this year. Jamie Bell entertains as Ray Lennox, a younger detective swayed by Bruce’s corrupt ways whilst Eddie Marsan and Shirley Henderson amuse as a mismatched couple that Bruce seeks to exploit. Emun Elliott, Kate Dickie, Imogen Poots, amongst others round of a stellar supporting cast. However, it is Jim Broadbent that provides the most memorable of these supporting turns as Bruce’s Aussie doctor. Dr. Rossi appears in many of Bruce’s drug-fuelled nightmares, with Broadbent playing the part like a Barry Humphries creation on acid.

The darker subject matter of Filth is further subverted by a stellar soundtrack featuring an array of upbeat pop classics. Tom Jones’ Doctor Love, Billy Ocean’s Love Really Hurts Without You, and David Soul’s pop masterpiece Silver Lady all make an appearance amongst the film’s depravity. A bizarre cameo from David Soul manages to one of the film’s standout moments, whilst Ocean’s track leads the film’s cheeky animated closing credits.

Although it is unlikely to truly shock and perhaps more of a case of Sleaze than Filth, Jon S. Baird has crafted an electrifyingly stylish, darkly comic feature that proves to be the strongest Irvine Welsh adaptation out there – more impressive than Trainspotting in my book.


Originally posted on The People’s Movies.