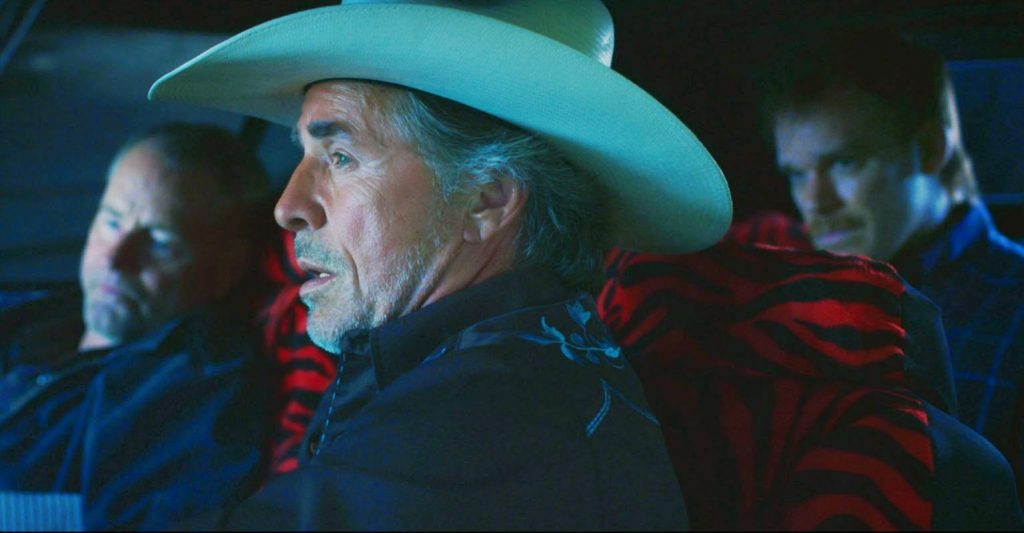 Jim Mickle, the director behind Stakeland and We Are What We Are is a man who consistently betters himself with each of his impressive productions. The filmmaker’s fourth feature film, Cold in July, a gripping pulpy vigilante film sees him reach new heights of excellence in a film that is destined to be regarded as a modern classic

After killing an intruder in his home Texas picture-framer Richard Dane (Michael C. Hall) finds himself in a terrifying battle with the deceased’s ex-con father (Sam Shepard), until an unexpected turn of events finds the two men entangled. The pair turn to private eye Jim Bob (Don Johnson) for help in a case which sees the three turn into a vengeful vigilante trio.

Jack Damici’s narrative is perhaps one of the most boldly unpredictable in recent memory, with Cold in July taking us down some truly surprising routes. Opening as a tense and undeniably creepy home-invasion thriller, mid-way through the narrative shifts becoming a fast-paced pulpy vigilante team-up. It is quite staggering to compare how events have dramatically changed from the first act to the end of the final act – and not in the conventional way you might expect.

Mickle’s roots in dark Southern Gothic horror are incredibly apparent in the opening half detailing Dane’s torment at the hands of Sam Shepard’s ruthless ex-con. Here cinematographer Ryan Samul packs the film with a brooding atmosphere of unease and Mickle amps up the darker imagery – a shot of Shepard standing in the house peering over Dane’s child in the darkness is utterly chilling. Mickle presents a South filled with fear and moral corruption and where anyone could be in Dane’s position, when self-defence can lead to an even deadlier turn of events.

With this shift also comes bucket-loads of fun – especially seeing the three leads strap up with shotguns and handguns galore and take down a barrage of morally-corrupt goons to a pulsating synth soundtrack. Whilst Hall is tremendous as the family man taken out of his depth, Cold in July is Johnson and Shepard’s show – with the two stars delivering career best performances. Johnson and Shepard are charismatic, tough, amusing and incredibly bad-ass.

Cold in July is more than a throwback to the vigilante B-Movie, it’s an unpredictable experience from start to finish that successfully grips, amuses and delights throughout. Johnson and Shepard have never been better than this.