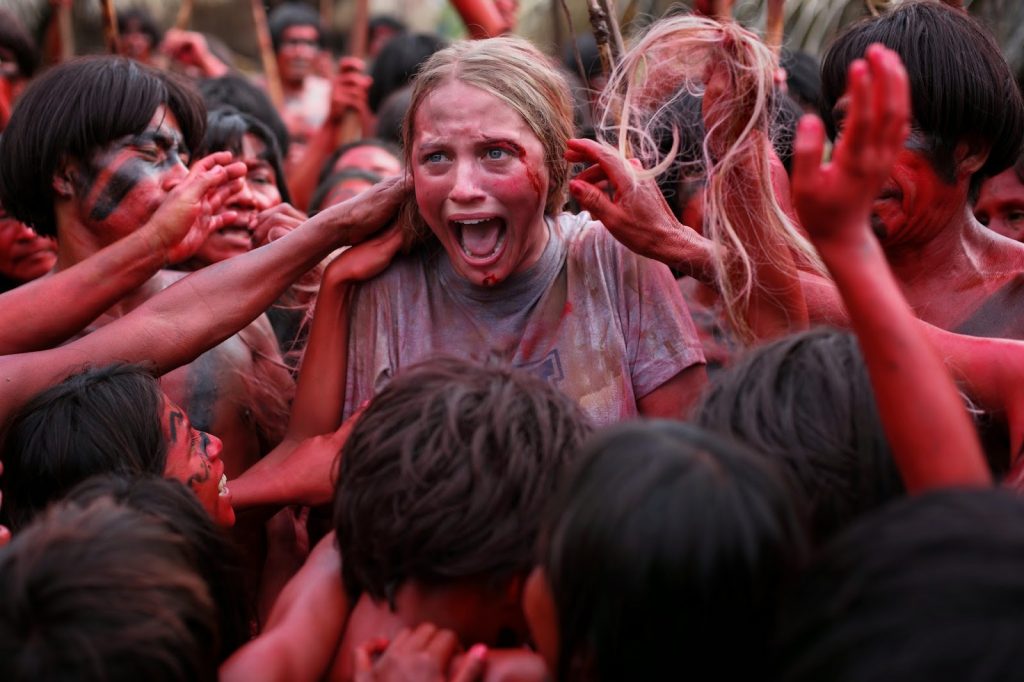 Eli Roth continues to prove that he is quickly becoming a titan in the horror genre with his first directorial feature film in six years, The Green Inferno.

Paying homage to much-missed Cannibal-horror film (see Cannibal Holocaust, Man From Deep River, Eaten Alive!), The Green Inferno follows a group of college students who become stranded in the Amazon after their plane crashes when returning from a successful protest. The survivors soon find themselves imprisoned by a local tribe with a taste for human flesh.

Like all good horror films should be, The Green Inferno is nerve-shreddingly tense, packed with a foreboding atmosphere of dread, and is in equal parts visually grotesque and gorgeous. Whilst this lovingly pays tribute to the cannibal film, Roth breathes a huge amount of originality and dynamism into the subgenre. For example, before crashing in the jungle the establishing narrative events are equally engrossing and original as we see a bunch of passionate students attempt to prevent the destruction of the rainforest. The action in these scenes is slick and Roth amps up the tension even before The Green Inferno’s main source of horror is revealed.

However, when we do see the students end up imprisoned and feasted on by the tribe, Roth further kicks proceedings up a gear building on the existing suspense and dread, as well as unleashing oozing waves of gore and splatter. In fact, the first moment of cannibalism is truly harrowing in its representation of limb ripping, eye-gouging, and tongue shredding. It is a cracking reminder of the genre’s power to shock, repel and fascinate us and few filmmakers know how to do this as well as Roth. Perhaps even more difficult to watch than the gore is the various attempted escapes which are terrifyingly suspenseful.

Much of the horror from The Green Inferno comes in the fact that this is an enemy that cannot be reasoned with or talked out of their plans – leaving the victims with very slim chances of survival. It really emphasises the old The Hills Have Eyes tagline ‘the lucky ones died first’. Of course, the gruesome blood red paint lashed over their bodies, bizarre rituals and suggestions of female genital mutilation keeps things even nastier.

Whilst settings being picturesque is not normally that important in the horror world, The Green Inferno proves this wrong. The jungle is filled with lush greens and often shot from above (notably in the opening credits) – giving the film a real beauty that masks a sinister edge as viewers will undoubtedly be aware of the horrors that lurk with this picturesque landscape.

As always, Roth keeps things from getting truly bleak and morbid by keeping his tongue firmly planted in his cheek (well perhaps not, as the tongues here are being cut out and eaten by cannibals). There’s a great sense of humour pulsing through The Green Inferno: from Sky Ferreira’s pitch-perfect supporting turn to bigger gross-out gags (Ariel Levy’s Alejandro having one last wank before being eaten and Kirby Bliss Blanton’s glamorous Amy deciding to empty her bowels within their cage, much to other prisoner’s horror.)

A diverse cast also keeps proceedings believable and involving with great conviction in the performances. Lorenza Izzo makes a thoroughly likeable lead and does an excellent job conveying the horror of her surroundings. Whilst Ariel Levy, Daryl Sabara, Nicolas Martinez, Matias Lopez, and Magda Apanowicz bring life and charisma to the roles of the other potential victims.

The Green Inferno is without doubt Roth’s finest work to date. Shot with masterful suspense and a nerve-shredding atmosphere, Roth has presented a future classic horror that is filled with wonderful shocks, stomach-churning gore and also a huge amount of fun.