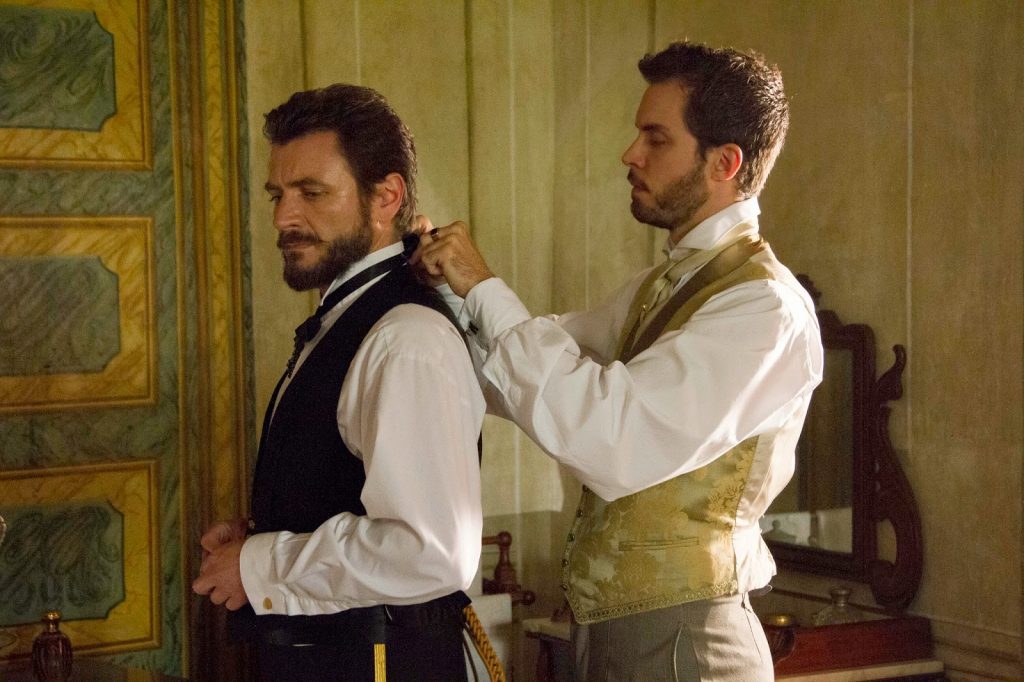 Falling Star takes us to Spain in 1870 where King Amadeo I (Àlex Brendemühl) is just beginning his reign in a country plagued by threats of republicanism, workers rebellions, and growing discontent. When his conniving Ministers rule that his life would be at risk were he to leave his palace, Amadeo becomes confined to his gilded cage seeking distractions from his staff and wife (Barbara Lennie).

Minarro writes and directs capturing a sense of the basic context of the period, however it’s clear that he has more fun presenting this tale as a surrealist arthouse tale that refuses to take itself too seriously. This is a bold move and results in a consistently engaging and entertaining watch where we feel relatively informed about the historical context, but are more importantly allowed to have fun embracing the camp absurdist spectacle of Falling Star.
We see Amadeo, a man filled with optimism and hope for his reign – with a genuine desire to help the people of Spain slowly lose courage in his convictions as scheming Machiavellian politicians effectively render him housebound (or palacebound). Essentially Minarro asks the question of how would the most powerful man in the country occupy himself if this power was removed? The boredom of gilded cage results in the King seeking solace in a number of camp distractions allowing Minarro to pack the film with surreal imagery and absurd novelties: peacocks and jewel-encrusted turtles roam the palace, confetti falls, and Amadeo joyously dances to a contemporary soundtrack featuring the likes of a jaunty Spanish cover of Dusty Springfield’s I Only Want To Be With You.

With Amadeo housebound, we gain an insight into the lives of the servants that surround him – with each character bringing life and variety to Falling Star. Soap opera romances between the servants develop, with Falling Star at points feeling like a raunchy Spanish Downton Abbey. We see how Amadeo’s relations change between: he and his kitchen maid, his flirtatious manservant (who has a penchant for having sex with melons – shown in bold, explicit detail, I might add) and his cautious aid (Àlex Batllori).

It would be unfair to simply describe Falling Star as surrealist camp as there is a fascinating character study at its heart – most notably in seeing Amadeo’s ambition turn into a lethargic boredom that damages his relationship with his wife. There are hints of Sofia Coppola in the drifting nature of Minarro’s tale, whilst the darker surreal moments have a taste of Alejandro Jodorowsky about them. There is a general sense of darkness that is balanced out with the surrealist style: Falling Star captures an atmosphere of political unrest amongst the wonder, all within the palace walls through sound-effects of bombs and whispering ministers suggesting a real threat to the life of Amadeo.

Cinematographer Jimmy Grimferrer shoots Falling Star with a general warmth thanks to a regal colour scheme of bold reds and browns, whilst the outside grounds have a rich beauty. Falling Star gains further conviction from some outstanding performances with Àlex Brendemühl breathing life and dynamism into Amadeo and Lorenzo Balducci mesmerising as the melon-loving manservant.

Falling Star is a consistently engaging experience filled with vibrancy, dazzling surrealism, and a raw sexuality. Minarro has crafted an outstanding cinematic experience that demands your attention.

I should also note that Minarro produced an excellent little comic short beforehand titled Rob Roy and the Cistercian Monk. Set to an orchestral version of Franz Ferdinand’s Do You Want To, the cheeky short shows Rob Roy and a Monk playing and causing chaos in an open field. Weird and wonderful.