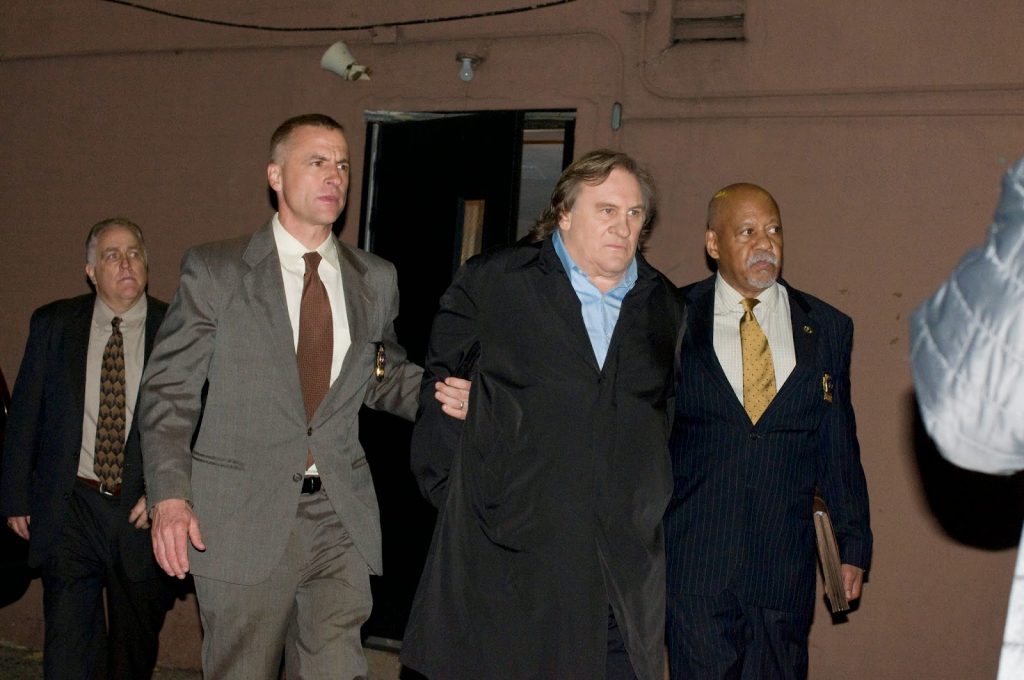 Abel Ferrara’s latest work Welcome to New York is a film so unflinching in its portrait of excess and moral-corruption that it makes The Wolf of Wall Street look like it was produced by Cbeebies.

Devereaux (Gerard Depardieu), one of the world’s most powerful businessmen is filled with a gratuitous sexual hunger – a man so entangled in his lifestyle of power, sex and money that he believes everything is his. This is until Deveraux sexually assaults a hotel maid in New York and finds himself arrested, on the verge of being stripped of this power. Ferrara uses the high-profile case of Dominique Strauss-Kahn as his factual basis for this slow-burning piece filled with excess and debauchery.

The first time we see Devereaux he’s entertaining business clients with his army of model-like secretaries willing to do anything to please his clients – and himself. With his heaving belly out we gradually see the businessman’s hands ravage his secretary’s body. It’s repulsive, yet entrancing in equal measure and only serves as the tip of the iceberg in this tale devoid of morals. Devereaux’s brutish animalism is further showcased in a booze-soaked sex scene where the gargantuan man breast-slaps, hair-pulls during aggressive oral sex all whilst unleashing a bear-like snarl. The Edinburgh screening had the privilege né horror of watching this scene twice thanks to a subtitling issue.


The lack of moral conscience in Welcome to New York is most powerfully showcased in the attack sequence, where a naked Devereaux forces himself on a screaming hotel maid. Ferrara’s film is refreshing in how shameless it is and how little regard it has for decency, unlike other tale of corporate sleaze, The Wolf of Wall Street, Welcome to New York is genuinely repulsive in its excess. The chiselled good-looks of Leonardo DiCaprio are switched for the heaving belly of Depardieu whilst the glamorous sun-baked locations are subverted for seedy darkened hotel rooms.

As well as the bold and unflinching direction from Ferrara, a fearlessly grotesque performance from Depardieu ensures that Welcome to New York always grips and convinces. The actor is a force of nature as the animalistic beast who lacks any moral conscience. Ferrara showcases how easy it is for someone to become a God with the tools of power and money – a lifestyle so embraced by Devereaux that he shows no remorse or regret in the rape he attempts. This is a man so lost in his obsession with sex and power that there is something surprisingly sympathetic about Welcome to New York. Scenes which see Devereaux humiliated by having to be strip-searched by prison-guards are raw and challenging , with the man having no concept of why his dark actions have lead to this.

Whilst the narrative is stretched from the Strauss-Kahn case, there appears to be more to Devereaux than this. Ferrara has stated in interviews that there is part of him in Devereaux – and inevitably parts of the film’s lead actor, Depardieu. Opening with an almost-meta preface, we see Depardieu (as himself) sit with journalists in a staged-interview further blurring the lines between reality and fiction tapping into the brutish reputation that Depardieu has received in the past years.

Praise should also go to a fiery Jacqueline Bisset as Devereaux’s power-hungry wife (think Lady Macbeth) who dreams of being First Lady to her husband, but simply ends up fixing his many mistakes. The semi-improvised feuding final scenes with Depardieu and Bisset are cinematic gold, watching two unrestrained dramatic titans battling it out.

Welcome to New York is a staggering watch that simultaneously thrills and repels. Depardieu’s unrestrained performance is utterly fearless and marks the pinnacle of his career.