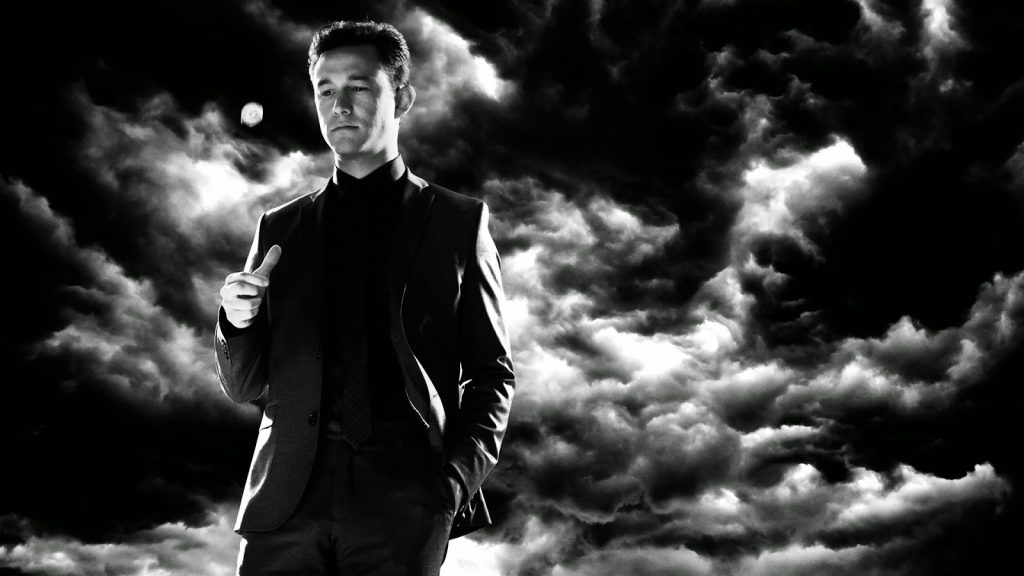 Returning to the connected anthology style of the first film, A Dame to Kill For presents four stories of booze, broads and bullets that take place in the gritty depths of Sin City. We see Marv (Rourke) take revenge on the city’s low-lives, Dwight McCarthy (Brolin) fall for deadly femme fatale ex (Green), cocky young gambler Johnny (Gordon-Levitt) take on the corrupt Senator Roarke (Boothe), and a broken Nancy (Alba) seeking revenge for the death of old-flame John Hartigan (Willis).

Rodriguez and Miller skirt similar territory to 2005’s Sin City both narratively and stylistically so it is unlikely that A Dame to Kill For will convert any detractors of the first film. Filled with pensive narration packed hyperbole and visceral language, the nostalgic tone of the Sin City universe remains gutsy and refreshing – as does its visuals which continue to pack a punch. The striking black and white is further complemented through the use of moderate 3D – a move which normally pales the colour of the average film, but here has little consequence to the mesmerising visuals. The limited use of colour alongside the black and white continues to entrance – with deep reds, bold greens and shining yellows mesmerising against the bleak backdrop.

Each segment (most of which are intercut with each other) is met with varying success and is likely to differ depending on which characters you prefer. Marv remains a relatively dull character with few complexities about him, however, the brief opening segment in which he features in (‘Just Another Saturday Night’) gets proceedings off to an energetic start as we watch the mountain of muscle hunt down vicious students – complete with car chases and buckets of bloodshed. This is quickly followed by the two standout segments: ‘The Long Bad Night’ and ‘A Dame to Kill For’.

The first of these follows cocky young gambler Johnny take on corrupt Senator Roarke. Set in smoky backrooms of dive bars – the poker games enthral and build to violent excesses of revenge and bloodshed. Gordon-Levitt brings a charming swagger to the fold as we watch the confident young hero looking for a good time take on the might of political corruption. Here Boothe showcases himself as the film’s best player exuding a wild eyed anger and vitriolic Southern gumption to the segment.

The bulk of this follow-up is spent on prequel-segment ‘A Dame to Kill For’ which sees Josh Brolin step into Clive Owen’s former role (pre-plastic surgery). This is a tale that has all the trappings of a classic hard-boiled forties noir packed with Miller and Rodriguez’s expected excess of tantalising nudity and stylised bloodshed. Brolin plays the private eye haunted by former flame Green who claims to be in distress. Here Miller’s narrative packs a number of impressive twists, action and genre tropes into this pulpy segment where Brolin makes a fantastic broken man and Green dominates as the sultry yet devious femme fatale.

Slightly less gripping is final segment ‘Nancy’s Last Dance’ which sees Jessica Alba’s exotic dancer plots to kill Senator Roarke for his part in the suicide of former lover John Hartigan at the end of Sin City’s ‘The Yellow Bastard’. With Willis making a few hallucinogenic appearances, he does not feature too much – instead we see her team-up with Marv for a shoot-out at Roarke’s mansion which breaks little new ground – albeit providing a somewhat satisfying end to the Hartigan narrative.

Whilst Sin City: A Dame to Kill For is not superior to its predecessor, it certainly does an impressive job at reaching the same par. With two outstanding segments and two relatively entertaining ones, A Dame to Kill For has a lot of fun paying homage to forties noir and toying with violent and sensual excess. Rodriguez and Miller have crafted a world which remains visually outstanding, and with a cast who truly immersive themselves in this dark world, it is a challenge not to be absorbed into the hot, pulpy depths of Sin City.