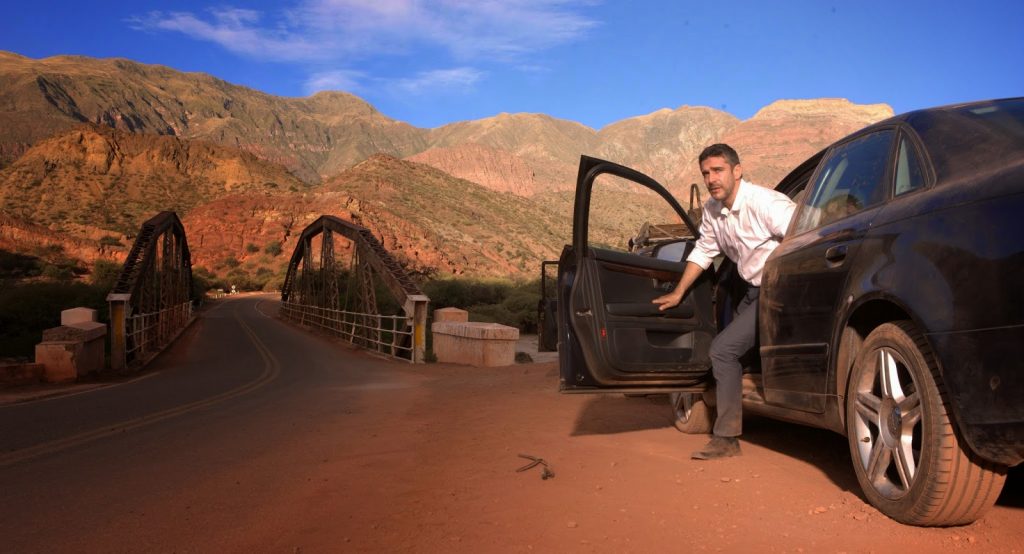 The Oscar nominated Wild Tales may have failed to achieve victory in the Best Foreign Language Film category, but it proved the most interesting nominee in its grouping. Written and directed by Damián Szifrón, this anthology delivers six bold tales of over-the-top revenge, score-settling, and sticking it to the man.

There is a real cathartic joy in watching Szifrón’s stylish and amusing film take on human problems and the annoyances each of us face on a daily basis – from slow drivers to petty bureaucracy and unfaithful spouses. This is handled in such an overblown and gleefully silly way that it is completely understandable that the charming Wild Tales‘ has been a huge hit in its native Argentina and a Festival darling all across the globe.

Opening with the punchy ‘Pasternak’ we see a group of strangers gathered on a plane, yet it appears each of them has a connection with the others. This simple coincidence soon turns in to a sinister plot. Here Szifrón establishes the naughty humour of Wild Tales – as well as giving us a taste of his highly satirical vision of humans under pressure.

Segment two, ‘The Rats’ poses the question what would you do if you had the chance to murder someone who wronged you – with no fallback. The humour increases here as Rita Cortese’s gutsy prison-loving cook spurs on a young waitress to take-out the man who caused her so much distress.

A personal highlight arrives by Wild Tales’ third episode which reads like a depraved take on Spielberg’s Duel. Titled ‘The Strongest’ the skit begins with one driver overtaking another and descends into full-blown chaos. As our protagonist realises the stomach-churning predicament he finds himself in when a flat tyre arrives, Szifrón takes us down a dark, yet highly comic route in what proves to be the most violent, yet amusing segment.

As is traditional within the anthology film, not all segments impress on the same level – and as consistently fun as it is, there are occasional stale lapses in Szifrón’s film. This first becomes apparent by the fourth segment ‘Little Bomb’ which sees Ricardo Darin’s demolitions expert take revenge on the City Parking Office who repeatedly tow his car. Whilst the attack on petty bureaucracy is likely to amuse anyone who has been on the wrong end of a fine or parking ticket, the segment is a little stretched out and lacks the punchy humour of the previous skits.

‘The Proposal’ follows the lethargic structure of its predecessor as we see a wealthy family attempt to cover-up their son’s hit and run. This serves as an attack on corporate greed and legal corruption as we see the familial patriarch (Oscar Martinez) run round in circles attempting to meet the increasingly-greedy bribes from those helping cover up the crime. Again, a little long winded, but a great performance from Martinez keeps things moderately amusing – although this is unlikely to be anyone’s favourite segment.

Wild Tales’ conclusion ‘Until Death Do Us Part’ ends things on an impressive high and ultimately feels like the film’s biggest set piece. This gleefully over the top tale sees a Bride wreak havoc on her wedding day after making an unpleasant discovery about her new spouse. This is gleefully twisted fun as Érica Rivas’s Bride unleashes hell on her unsuspecting wedding guests. There’s a real flare of the film’s producer Pedro Almodovar here as the scorned woman takes her vengeance.


By no means a perfect watch, but the best segments of Wild Tales are so great that it is hard to be bothered by the slightly less enjoyable ones. This is a gleefully naughty, effortlessly amusing look at the fine line between comedy and tragedy assembled magnificently by the ballsy Szifrón.
★★★★