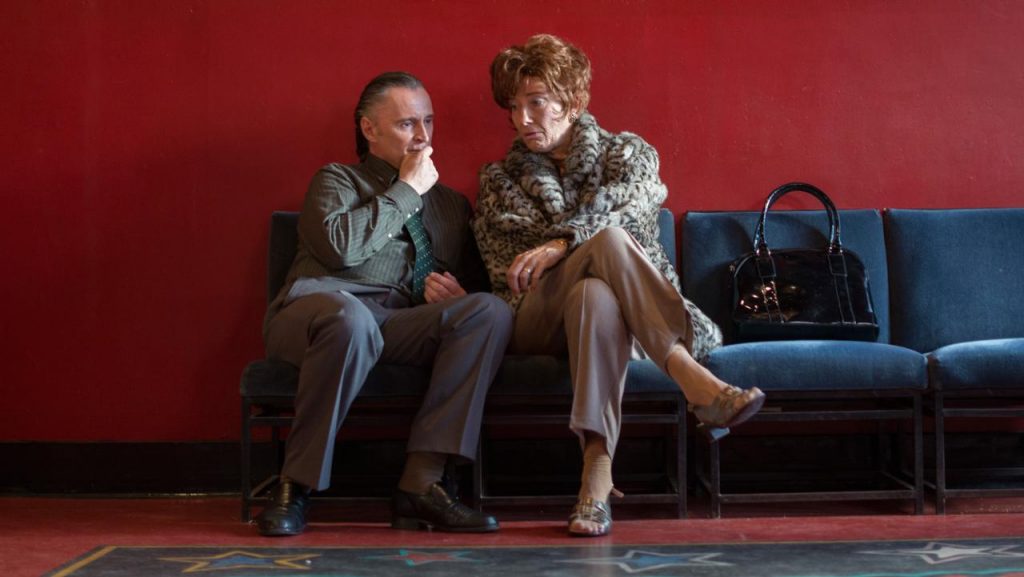 This is a repost of our Edinburgh International Film Festival review.

Robert Carlyle directs and stars in The Legend of Barney Thomson, a darkly comic tale adapted from the novels of Scottish author Douglas Lindsay. A bit like Sweeney Todd meets Psycho by the way of an Irvine Welsh novel, Carlyle’s debut feature is one that pays tribute to his Glaswegian homeland, whilst presenting some (mostly successful) macabre fun.

Barney Thomson (Carlyle) is a quiet, unassuming Glasgow barber whose mundane life is flipped when he accidentally kills someone. Pressure mounts for Barney as the police (headed by Ray Winstone’s Detective Holdall) grow suspicious, leaving him to turn to his fiery mother (Emma Thompson) to help cover up his crimes.

Carlyle’s Glasgow makes the perfect setting for this tale that combines grisly murders with off-kilter humour. This is a world where a serial killer posts body parts from Scottish tourist locations, but life goes on as normal in a world of smoky bingo halls and quaint barber shops. The aesthetic Carlyle crafts is also driven by kooky nostalgia seen in everything from Emma Thompson’s Bette Lynch ‘all fur coat and nae knickers’ look to the (dated yet) iconic Glasgow locations that will be familiar to every – from the Barrowlands to the East End. A soundtrack filled with classic oldies like Engelbert Humperdinck’s The Last Waltz and Roy Orbison’s Blue Bayou furthers this quirky ideal that Barney’s quirky Glasgow is almost caught in a time-loop.

Carlyle crafts some powerful moments of unnerving tension through the cat and mouse dynamic of The Legend of Barney Thomson. The interrogation scenes between an unnerved Barney and growling Holdall are brimming with a paranoid intensity, whilst the sense of panic Carlyle crafts in the murder sequences are expertly tense. For the most part, this is a narrative that Carlyle keeps a steady grip of as director and although he ensures that it is taut and often thrilling, the actor-director packs this tale with a handfuls of fun – much of which is thanks to a truly game cast. The film’s final act sadly verges on sheer silliness taking what began as a fun comment on police procedurals and red tape, and turning it into a nonsensical over-the-top gag that never really works.

We may never lose ourselves in her portrayal of Barney’s mother, yet Emma Thompson is a welcome asset and showcases her much-loved comedic chops. The actress can inject a sense of fun into the most mundane moments and is a pleasure to watch as the tough Glasgae bird Cemolina. Winstone brings his unparalleled gruff intensity to the fold, whilst Ashley Jensen excels as an over-ambitious hothead cop. Screen veterans James Cosmo and Sir Tom Courtenay provide some fun in smaller roles, whilst young stars Sam Robertson, Brian Pettifer and Martin Compston bring further character to the proceedings. However, the film is Carlyle’s and he provides one of his strongest performances as the meek, ever-panicked Barney.

The Legend of Barney Thomson is an impressive debut for Robert Carlyle. There is enough grisly fun here to both repel and amuse, whilst game performances and a nostalgic look at Glasgow ensure there is much to relish.