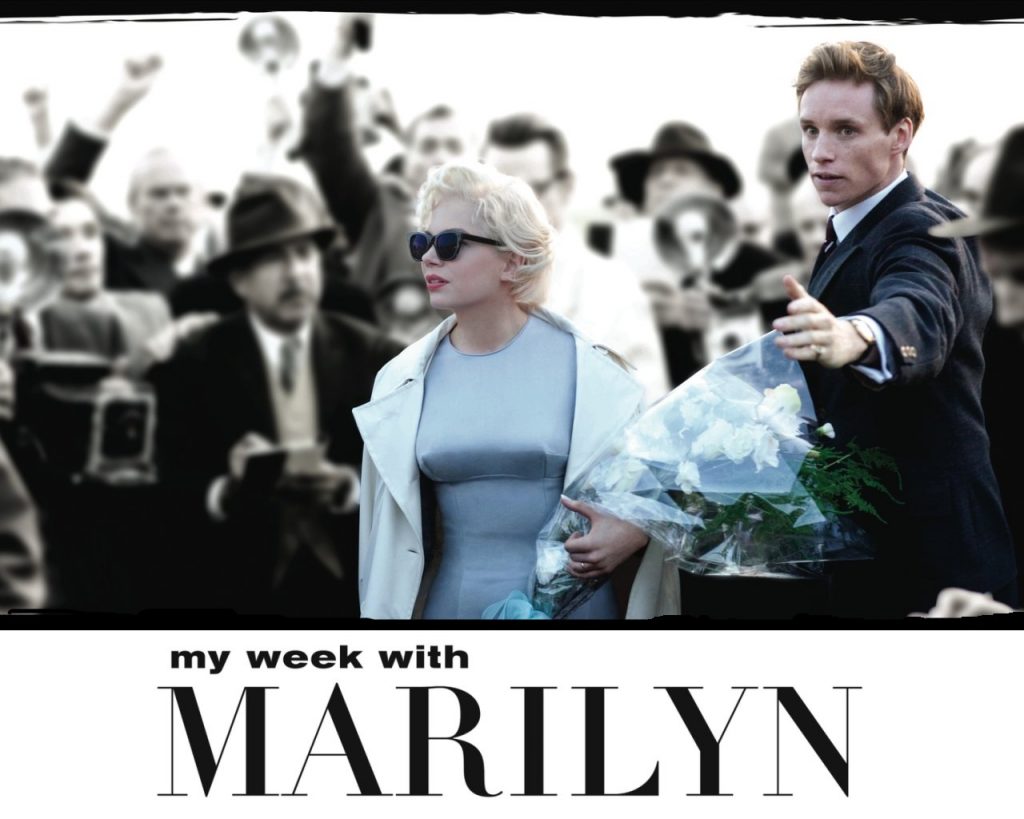 We all know the iconic persona of Marilyn Monroe – the platinum blonde sex-kitten that was once the world’s most famous woman. My Week With Marilyn boldly flips these perceptions, showing us a little bit of who the real Marilyn Monroe was, in this moving yet fun tale of Marilyn working with Sir Laurence Olivier on his film The Prince and the Showgirl. Based on Colin Clark’s memoir – Clark served as third assistant director of Olivier’s film, we see the heated relationship between the two stars as well as Monroe tackling her personal challenges.

Simon Curtis directs, resisting the temptation to simply rely on making a film about making a film – giving us a real sense of depth into the characters off-set. Still despite this, the scenes on the film-set showing Marilyn under pressure or Olivier’s frustration are some of the most engrossing of the film. Curtis directs capturing a sense of nostalgia and glamour within the British film industry of the 1950s. Whilst Curtis presents the character in a serious light, he is also ablt to have some fun playing about with the iconic figures like Monroe, Olivier, Vivien Leigh, Dame Sybil Thorndike and Arthur Miller.

Despite not looking exactly like the icon, Michelle Williams truly brings a convincing depth to Monroe and becomes entirely believable in the role. Monroe is presented as a woman who doesn’t know what to think – she’s controlled and protected by those around her; from her acting coach (played by Zoe Wannamaker) to her agents and photographers. Her confidence is shattered, being fed lies by those around her, each obsessed with her star power. The only one who speaks the truth to her being the young third assistant director, Colin Clark – a relationship which provides the emotional backbone of Curtis’s film. Williams also recreates several iconic Marilyn moments throughout the film: from a toned down recreation of ‘Heat Wave’ from There’s No Business Like Show Business to an emotional cover of Bus Stop‘s ‘That Old Black Magic’. William’s is truly a revelation here as the ‘star’ who dreams of becoming a fine ‘actor’.

A stark contrast to Marilyn is Kenneth Branagh’s Olivier – the fine actor wishing to become a star. Branagh provides a real acting masterclass here, who dominates as the fiery yet charming Olivier. There is also an understated comic quickness in Branagh’s performance – with the tenuous relationship between Monroe and Olivier provides the basis for some incredibly funny dialogue, best showcased when the frustrated professional exclaims: ‘Marilyn, my darling, you are an angel and I kiss the hem of your garment but why can’t you get here on time for the love of FUCK?’ This mixture of exuberant camp and frustration puts this up there with Branagh’s most enjoyable performances.

Young newcomer, Eddie Redmayne brings a nervous excitement and sweetness to the part of Colin – with the relationship formed between he and Marilyn completely charming from the onset. The cast list truly reads like a who’s who of the acting world with the marvelous Dame Judi Dench and Julia Ormond, stealing scenes left right and centre as Dame Sybil Thorndike and Vivien Leigh. There are also Sir Derek Jacobi, Emma Watson, Dougray Scott, Toby Jones and Dominic Cooper, each managing to shine with smaller supporting roles.

My Week With Marilyn will not teach you a huge amount about the star that you did not already know, it’s captivating, nostalgic entertainment with a wonderful balance between poignant romantic-drama and humour. It’s a personal favourite of the year for me with outstanding performances from Williams and Branagh and engaging direction from Simon Curtis.