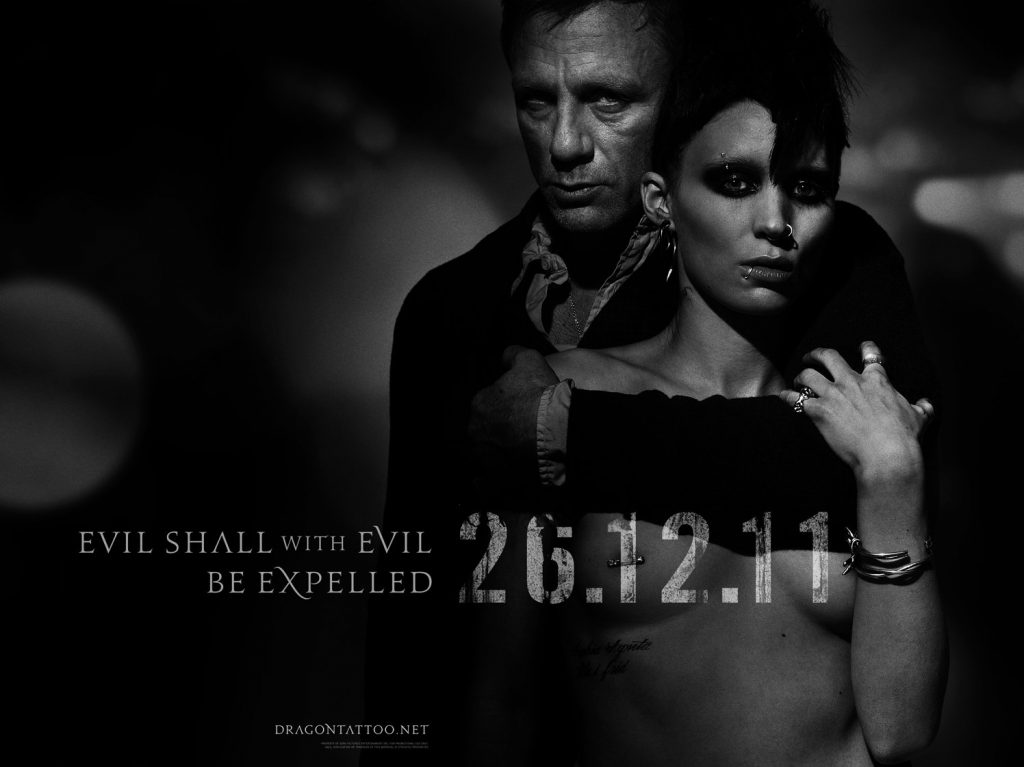 David Fincher’s adaptation of Stieg Larsson’s bestselling novel, The Girl with the Dragon Tattoo, has unfortunately been branded a remake – which is most certainly not the case. Fincher’s film is alternative adaptation of Larsson’s novel and not a rehash of Niels Arden Oplev’s 2009 Swedish film. And let’s face it, many of us (myself included) have been too lazy to read Swedish subtitles and thought “Oooh I like Daniel Craig, let’s just wait for the nice American one. Fortunately, Fincher has presented us with an original and captivating adaptation of Larsson’s novel and has not held back on his usual auteristic flair.

The film follows journalist, Mikael Blomkvist (Daniel Craig) recruited by a Swedish industrialist, Henrik Vanger (Christopher Plummer) to help piece together the disappearance of a young girl in 1960s Sweden. He is aided by a young computer hacker, Lisbeth Sander (Rooney Mara) who helps him unearth a dark past in the Vanger family history. The cast also includes such luminaries as Stellan Skarsgård, Joely Richardson and Steven Berkoff.

Fincher has presented us with a brutal and captivating detective thriller, which holds the viewer in a vice-like grip for the 158 minute runtime. Given the length of the film, the pace rarely slows down with The Girl with the Dragon Tattoo never becoming boring. Even from the opening titles, Fincher’s film astounds – we’re struck with ink drenched, fire-infused visuals, with a haunting cover of Led Zeppelin’s Immigrant Song (with the Yeah Yeah Yeah’s Karen O on vocals) from Trent Reznor and Atticus Ross. The sheer ferocity of these titles gives an inclination into the direction the film is heading, with Fincher’s film never shying away from the brutality of the source novel, at points becoming difficult to watch. An extreme sexual-attack on Lisbeth may immediately put some viewers off but in the context of Fincher’s film is a brave move and truly draws us to Mara’s character.

Given the messy nature of the source novel, Fincher has managed to create a lean, punchy, stylish thriller. There’s also a return to content Fincher, so excellently explored in his earlier film, Seven, through it’s look at biblical killings in the detective elements of the plot. The Girl with the Dragon Tattoo also contains the best use of Enya’s Orinoco Flow in modern cinema – I bet you never thought you’d see Daniel Craig gagged up with that playing in the background, but it genuinely works.

Although, the film is mainly about Lisbeth Sander, Daniel Craig does well bringing sense of vulnerability and kindness to the role of Mikhael,which we rarely see in his performances. This is a man we should not warm to – he is sleeping with a married woman, oblivious to Lisbeth’s affections (beyond sex) and lacks a connection with his daughter, but Craig’s performance really attaches us to the character. However, as previously stated, this is Lisbeth’s film and Rooney Mara is astounding – her physical commitment to the role alone can be seen through her drastic transformation including piercings, mohawks and dyed eyebrows. Mara allows us to feel a gut-wrenching sympathy for Lisbeth – we feel her pain and isolation, truly wanting this complex character to be happy. As always, Christopher Plummer is faultless as the dispirited tycoon, Henrik and towards the end of the film his performance truly melts your heart. Both Joely Richardson and Stellan Skarsgård make huge impact on the film in two wonderful, well-crafted supporting roles.

Fincher’s The Girl with the Dragon Tattoo is an unforgettable detective thriller that truly grips you from start to finish. His stylish direction combined with some astounding performances from Rooney Mara and Daniel Craig, make this a captivating and ingenious piece of modern cinema.