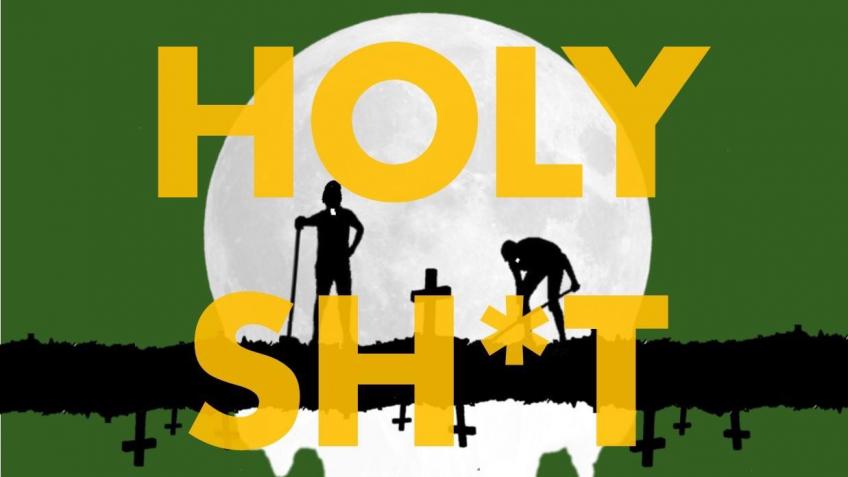 The Brick Fox Theatre Company’s macabre comedy Holy Sh*t arrives at the Edinburgh Festival Fringe – proving the perfect location to showcase a contemporary Burke and Hare inspired tale. Shining through its willingness to not take itself too seriously, the Jack Fairhust penned Holy Sh*t is a last minute pleasure of this year’s Fringe.

Determined to save their underfunded church, Priests George (Rafel Aptroot) and Charlie (Jack Dillon), begin selling bodies from ground’s graveyard. However, when police begin to investigate a missing persons case and the Wiggan mob begin to get involved, George and Charlie find themselves in too deep.

As the title will signify, Holy Sh*t, is delivered with tongue planted firmly in-cheek. This comic farce plays with dichotomies such as religion and law (which takes precedence?) and criminality and faith (is it right to keep faith alive by committing a heinous crime?). This Rosa Higgs directed production thrusts us into the madness of these questions thanks to incredibly game performances from Aptroot, Dillon and the impressive supporting players – as well as narrative packed with well-crafted character comedy.

Whilst George is the straight-man of the priestly double act, Aptroot is engaging and amusing as he captures this neurotic, straight-laced man of God’s gradually building blasé attitudes to his crimes. Both leads bounce of each other with an endearing odd-couple energy, with Dillon’s Charlie shining through his lack of conventionality; this is the least convincing priest imaginable – but it works thanks to intelligent, bleak comedy of the narrative channelled in Dillon’s skilled performance. Supporting players impress and carry the narrative along well – rising to the campy, farcical nature of the narrative.

Holy Sh*t does dip slightly in the middle as the mob begin to get involved – the story would still tick along nicely without this angle which does not bring a massive amount of comic appeal to the production.

Nonetheless Holy Sh*t is an impressively produced farce that shines through its darkly comic narrative and game central performances from Aptroot and Dillon.