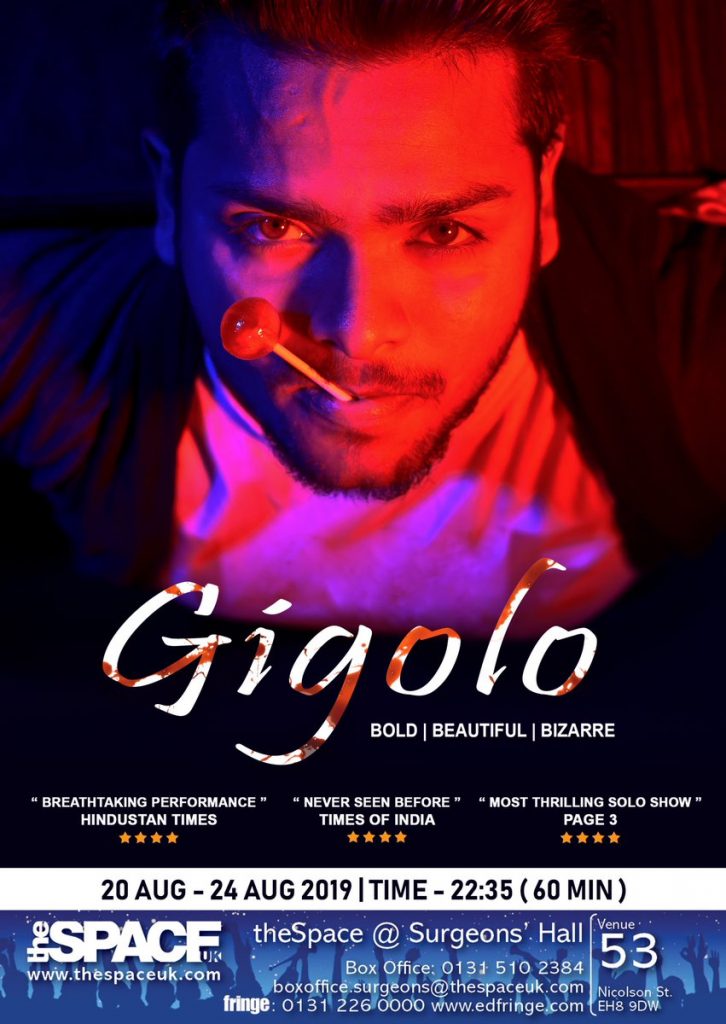 Murli (Tewari) recounts his journey to becoming a murderous male prostitute. Beginning with his childhood in India and the death of a young family member to tuberculosis, he soon goes on to recount the sexual abuse he faced as a child. As the narrative progresses, Murli explores his work in a restaurant in which he is accused of being a thief. This leads to a career as a Bollywood dancer, before he stumbles upon a career as a gigolo – but grows to disdain the ravenous hunger and desires of his clients.

Gigolo explores the idea that society has created this murderer through its greed and continual dissatisfaction and Tewari’s performance channels this well. The energetic performance carries the production for sixty minutes with an impressive intensity as he explores the traumas faced by Murli throughout his life. This intensity begins from the opening moments which begin with an intense scene of Tewari entering the stage carrying a black bag supposedly containing one of his victims. Yet for all its intensity, Gigolo is a little too clean cut in its structure with the very simplistic idea of Murli becoming a brutal serial killer after a somewhat successful dancing career.

It is these extreme transitions (which you’ll see in the synopsis) that gives Gigolo the abrupt, disjointed structure. Covering a large expanse of time in an hour show proves challenging – especially when trying to invest viewers emotionally – as we see Murli go through huge stages in his life in such a small space of time. Rapid ups and downs from death and abuse to success then murder, is quite a lot of narrative transition to cover in a small solo show. Perhaps limiting the scope of the production would allow for more time to be spent on certain scenes and help us as an audience further invest in Murli’s story.