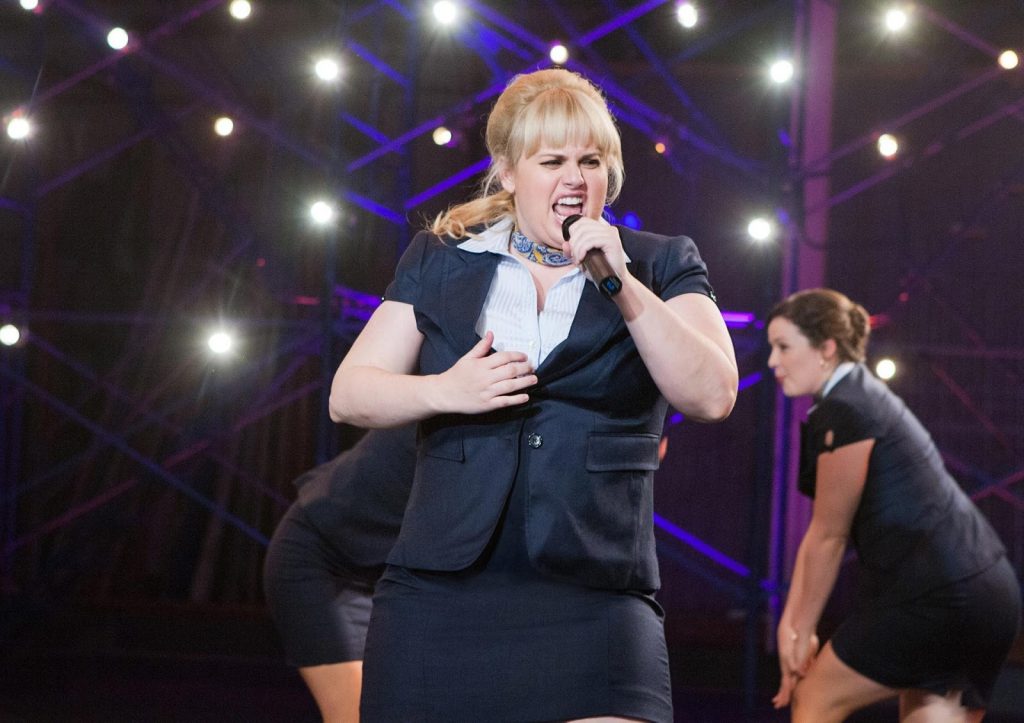 On the outside Pitch Perfect may look like another Glee-inspired musical comedy, thankfully it’s not. Jason Moore’s film proves to have enough cheeky humour and well-staged musical numbers to stand strong on its own.

Pitch Perfect follows Beca (Anna Kendrick), a at freshman at Barden University who is coaxed into joining singing group known as The Barden Bellas and discovers the world of competitive acapella singing.

Kay Canon (30 Rock)’s screenplay is a mixed bag, on one hand it features nearly every US college-set film cliché, on the other, it does has some genuinely clever dialogue and gags. Those of you familiar with the likes of the Step Up or American Pie series will notice a distinct air of familiarity – mainly in the form of the stereotypical characters – including the highly strung pretty girls, the quirky alternative chick, the butch potential lesbian and funny fat girl. When the narrative moves on to the girls featuring in regionals, Pitch Perfect feels like near every other musical-competition drama – we have also seen it earlier this year in gospel-musical, Joyful Noise. Even Anna Kendrick, a superbly talented actress, appears as if she is playing a cheap caricature of the indie girl. Look she has a spiked ear-ring and makes remixes of pop songs – she is edgy!

Fortunately, this lack of narrative originality is made up for in some refreshing gags and toe-tapping musical numbers. Canon’s humour is injected with PG-13 grit, getting away with some darkly crude and unexpected gags. Comic Goddess, Rebel Wilson is the source of about half these gags. The Australian actress has an undeniable talent for comedy, bringing a camp, over-the-top appeal to Pitch Perfect. Seeing Wilson showing off her ‘mermaid dance’ or belting out lines like “The Kraken has been unleashed!” midway through a fight, allows her to truly shine. Anna Kendrick is also on strong-form, making a rather uninspired character feel likeable and entertaining.

Other supporting turns including Elizabeth Banks and Christopher Guest regular, John Michael Higgins playing two no-nonsense commentators brings some welcomed adult humour. Other standouts include Hana Mae Lee as a near-mute member of The Barden Bellas who occasionally utters twisted lines like “You wanna see a dead body?” or” I ate my twin in the womb.”

Pitch Perfect is filled with well-crafted, often infectiously amusing musical numbers. Highlights include acapella versions of Ace of Base’s The Sign and Simple Mind’s Don’t Your Forget About Me. These musical sequences are distinct and entertaining enough to stand on their own, feeling more sincere and convincing than those in the likes of Glee. A more apt comparison would possibly be that Pitch Perfect is the Mean Girls of musicals.

Pitch Perfect certainly is not the most original film in years – with the college clichés feeling tired and uninspired. Fortunately, some darker gags, a cast of talented performers and strong musical sequences, make Pitch Perfect well worth a watch.