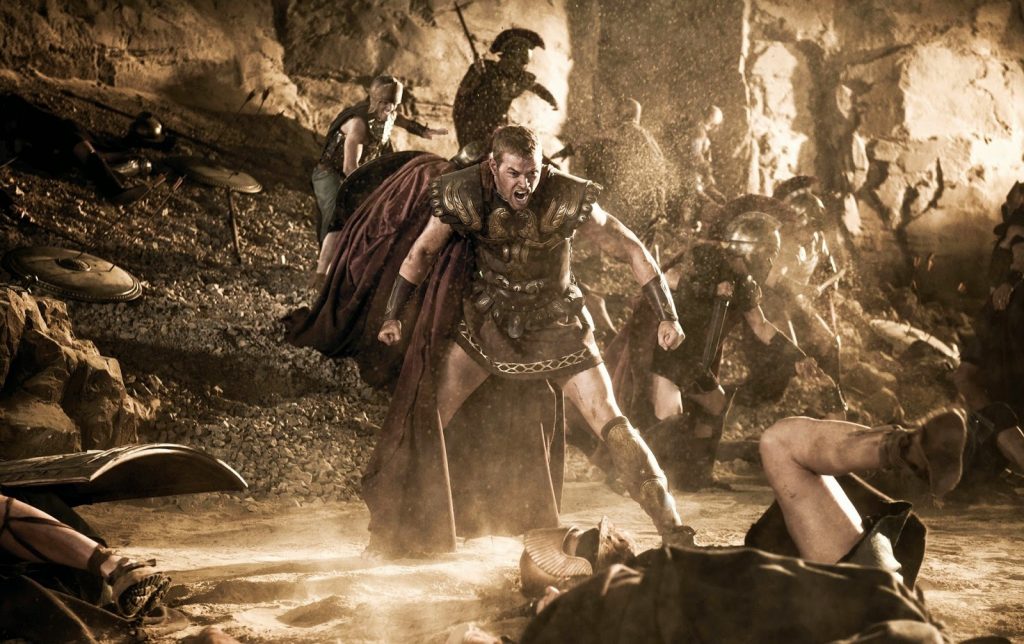 Starz’s Spartacus has triggered a new boom in the sword and sandals epics that popularised 1950’s cinema. Viewers are hungry for blood, sand and grit and with the news that Die Hard 2’s Renny Harlin would be taking on the genre with The Legend of Hercules, we were sure we were going to get this on a grand scale. To add to this, news that upcoming action star Kellan Lutz (soon to be seen in The Expendables 3) would be leading alongside a top-notch supporting cast: Scott Adkins (Universal Soldier: Day of Reckoning) and Liam McIntyre (TV’s Spartacus) – well things were just shaping up great. Nothing prepared us for how monumentally awful the end result would be.

After being banged by a ghost Queen Alcmene (Roxanne McKee) – wife of ruthless King Amphitryon (Scott Adkins), gives birth to demi-God Hercules. Twenty years on, Hercules (Kellan Lutz) is disowned by the King and sent to his death, yet finds himself spared and sold into slavery. He soon mounts his return and looks to free the kingdom from the tyrannical rule of his step-father.

We would consider ourselves great supporters of Lutz and Adkins – two action stars who have the potential to be great. Lutz shined in Indonesian actioner Java Heat, whilst Adkins countless successes include Ninja and the latest Universal Soldier flick. Therefore, it’s incredibly difficult for us to express just how awful they are here. Lutz may have the physicality fit for the Herculean legend but he delivers each line of dialogue like he has just gotten to grips with the English language. This is not helped by a New York meets British accent which packs each line with an unintentional comic hilarity – most notably his rousing speech prior to the film’s conclusion. Adkins, another man with a God-like physique fares no better. Fortunately these stars convince throughout the film’s fight sequences, regardless of how poorly directed they are.

The Legend of Hercules has an insane budget of $70m dollars – which never seems apparent. The overused CGI looks cheap and heavy-handed, especially when coupled with continuous slow-motion yells ultimately proves too distracting to make the battle sequences engaging. Further unintentional laughs come in the form of Jonathan Schaech’s cornrows inspired by Christina Aguilera circa 2001, Amphitryon’s desire to take-over Argos (the recession hasn’t even taken it from us yet), and some toe-curling CGI moments like Hercules destroying two pillars which he is chained to whilst almost touching cloth.

The Legend of Hercules is wonderfully awful in almost every technical and narrative area – however, it’s an unintentionally hilarious watch which makes it a contemporary cult classic. Certain moments have to be seen to be believed, with each topping the last’s sheer ridiculousness. Lutz and Adkins skimpy get ups more than make-up for their acting inability which provides belly laughs the size of Mount Olympus.