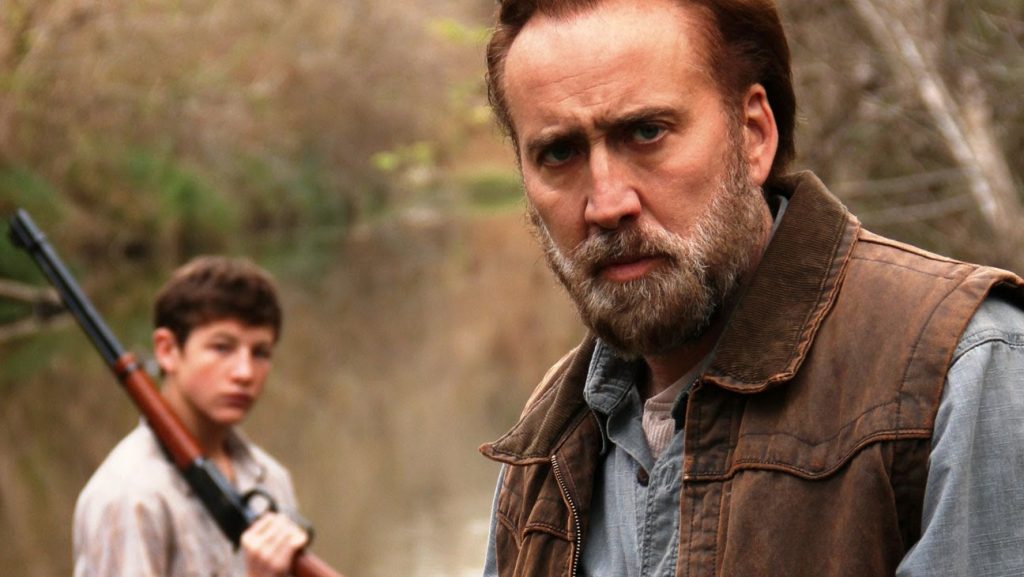 David Gordon Green’s southern drama Joe gives us an immersive portrait of fractured characters and redemption in the Texas wilderness. Nicolas Cage fans rejoice as this is his most impressive performance since Werner Herzog’s Bad Lieutenant (sincere apologies Season of the Witch fans)

Ex-con Joe (Cage) is working as a foreman with a group of forestry workers when troubled teen Gary (Tye Sheridan) comes asking him for a job. The two strike up a bond resulting in Joe intervening when he discovers Gary’s alcoholic father’s abusive behaviour.

Gary Hawkins’ narrative presents a stirring glimpse into the poverty in the south, and the relationships formed by its most vulnerable inhabitants. This is a world filled with fractured characters – from Joe and his struggle to maintain a life free from trouble to Gary’s abuse at the hands of his tyrannical father- making the bond formed between the two all the more poignant when set against such a harrowing backdrop.

There is a pulpy Southern Gothic darkness to Joe and Green’s direction finds the film’s grim character from this. With dim-lighting and many of the integral scenes taking place in darkened woodlands or at night, Joe feels bleak visually as well as thematically. This darkness is paralleled in the film’s most vile characters: Gary’s father Wade (Gary Poulter) – a man who will happily kill a homeless man for his hooch or steal his son’s wages, to the town’s troublemaker Willie Russell (Ronnie Gene Blevins) a man who preys on young girls. Green still captures a smidgen of humanity in these repulsive characters leaving us to pity their pathetic desperation.

What follows is a quest for redemption which becomes Joe’s sole purpose in the film’s final moments. Seeing the heart-warming father-son relationship developed by Joe and Gary, Joe’s quest in the film’s conclusion sees the emotional peak of Green’s film hit its stride. This is a tense battle that goes beyond simple justice, but becomes a redemption that is in equal parts psychological and moral – and one that will seal Joe’s fate.

There’s a remarkable intensity in Cage’s performance -the sort that was so prevalent in his earlier more unhinged roles. Cage excels as the broken-man fighting against injustice in a bleak world where it is normalised, with the actor carrying much of the film’s thematic weight in his taught, emotive performance. Cage allows small moments of unhinged passion to slip through when Joe loses his cool (showcased in a scene where he sets his dog on another that has been terrorising him throughout the course of the film), however it is the subdued moments of Joe that the full power of Cage’s performance kicks in. Tye Sheridan remains an exceptional talent, also, with the young actor bringing a strong sense of ambition and courage to the earnest Gary, despite his drunken father’s best attempts to crush it.

Joe is far from a pleasant watch, but it is a strikingly powerful one. Cage is the best that he has been in years in this hard-hitting look at fractured characters and redemption in the American south.