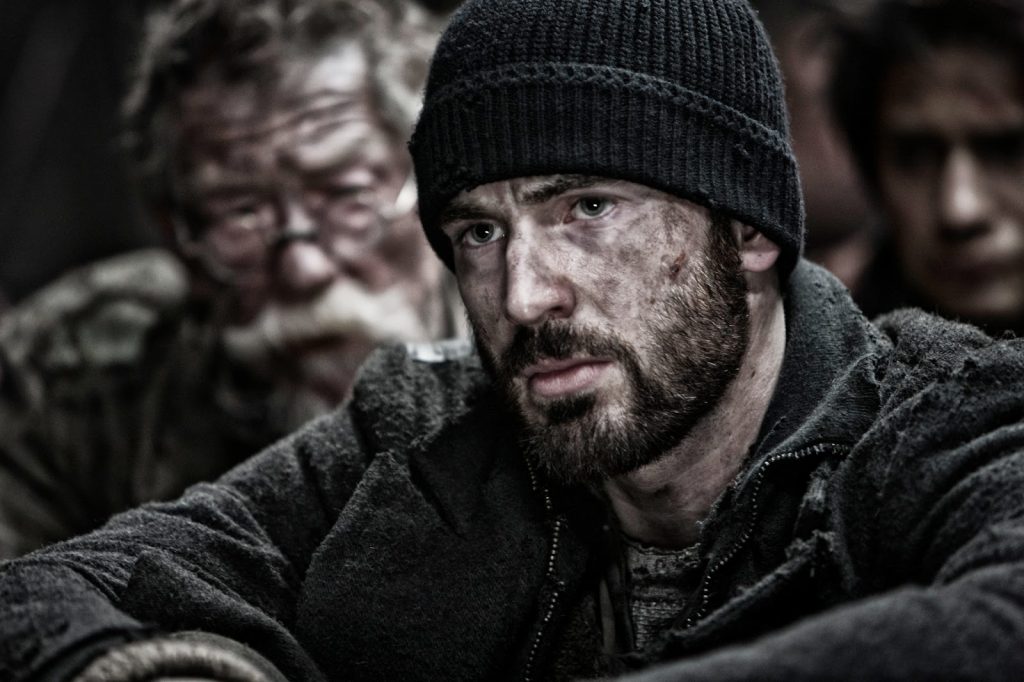 Snowpiercer finally made its UK premiere at this year’s Edinburgh International Film Festival and it is a pleasure to finally be able to say that it is the most original and exciting science fiction epics in recent years (sorry Lockout).

When a quick-fix for global warming backfires, Earth becomes covered in an icy blizzard rendering life extinct. That is apart from the inhabitants of a high speed train with its own ecosystem. Split into social classes, those living in the squalid, crowded conditions of the lower quarters launch a revolution in order to take over the train. Here they discover the luxury of the upper classes and a dark secret that fills the train.

Part of what makes director Bong Joon-ho’s film so remarkable is the distinctive universe he crafts. The train makes for a setting rich with thematic detail and a miniature parallel to the world in which we live now in regards to political and social order. Each location within the carriage mirrors some form of universal social parallel with the slums and poverty in the lower carriages to the glamour and luxury of the upper carriages. This also makes for a fascinating narrative setting with each carriage of the film presenting a new level with new challenges for our heroes to face as they attempt to scale to the front of the vehicle.

The tense revolution sequence in the film’s opening where the workers elaborately craft a battering ram and take down a barrage of guards sets the fast pace of Snowpiercer, and showcases the ambitious action and visuals that we can expect. Joon-ho keeps this impressive ambition consistently high throughout the film, both visually and narratively. Each carriage presents a distinct aesthetic from the steely, steampunk style of the lower-carriages to the bright colours of the children’s school carriage, the striking blues of the aquarium, the pulsating neon colours of the nightclubs and the bold decadence of the upper carriages. Even outside the train, Joon-ho has created an earth that is staggering to look at – a world blanketed in snow and filled with a dangerous beauty.

The action remains staggering throughout with highlights including the revolutionaries opening a gate to find a mass of armed goons armed with axes, chains and an assortment of deadly weaponry which leads to an Oldboy inspired bloodbath. A particularly impressive moments see the fighters plunged into darkness as the train passes through a tunnel, leaving them to blindly tackle the night-vision goggled enemies. Surprise danger in the children’s school carriage also provides some impressively shot action and allows Joon-ho to showcase a rich sense of humour. The visuals here are focused, packed with visceral power and crafted with masterful suspense.

With the help of a diverse cast, Snowpiercer further comes to life. The power of Chris Evans’ lead performance cannot be understated, with the actor carrying the majority of the film’s emotional weight. As the reluctant leader with a dark back-story, Evans proves himself to be an outstanding leading man with an equal precision in both dramatic acting and action sequences. Octavia Spencer’s mother of a kidnapped son adds to the emotional weight of Snowpiercer, whilst Jamie Bell, John Hurt and Song Kang-ho captivate just as equally. A scene-stealing Margaret Thatcher-esque turn from Tilda Swinton adds a vulgar humour to Snowpiercer, whilst a psychopathically cool and relaxed appearance from Ed Harris brings a further unease to the train’s ruling class.

The ambition of Snowpiercer needs to be seen to be believed. Joon-ho has crafted a staggering science-fiction universe with both inspired visuals and a stirring narrative theology to boot. An exceptional cast lead by Evans brings both the imaginative action and emotional core of Snowpiercer to life in all its vibrant glory.