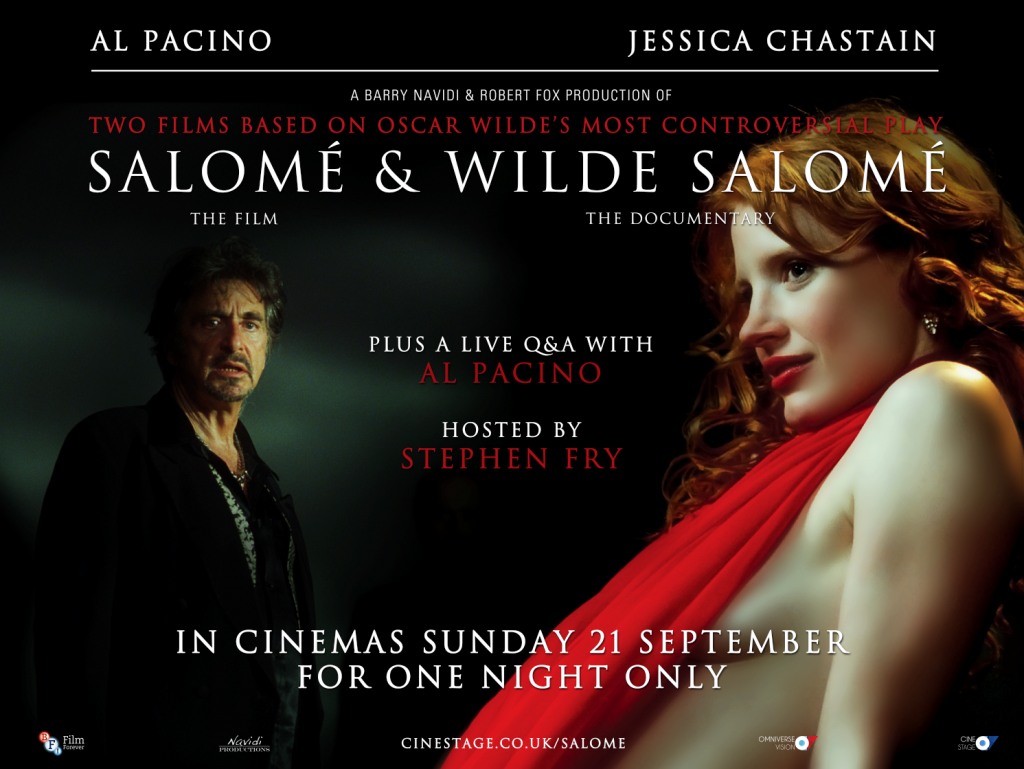 One of the most intriguing actor passion projects is Al Pacino’s obsession with Oscar Wilde’s seldom-read play Salomé. Originating in 1891, Wilde’s play details the Biblical story of Salomé, (stepdaughter of King Herod), who demands the head of the imprisoned Jokanaan (John the Baptist) on a silver platter as a reward for dancing the dance of the seven veils – much to her stepfather’s dismay.

Known more for his intense crime-centred roles, the method actor has starred in various theatrical adaptations of Wilde’s Salomé over the years – most notably in 1992 and 2006. However, it was on the latter of these runs that Pacino decided to embark on the ambitious task of directing and starring in a cinematic adaptation of Salomé, directing a documentary about the making of said feature – and also simultaneously performing in a theatrical stage version. Several years later, Pacino’s hard work finally sees the light of day with the actor’s cinematic Salomé and documentary Wilde Salomé both debuting as an enlightening double-feature.


Director: Al Pacino
Cast: Jessica Chastain (Salomé), Al Pacino (King Herod), Kevin Anderson (John the Baptist) and Roxanne Hart (Herodias, Wife of Herod)
Wilde tackling a biblical fable may seem like an odd concept for those familiar with his wit-packed masterpiece The Importance of Being Earnest or the darkly Gothic tale The Picture of Dorian Gray. However, Salomé is a work ripe with daring themes and grisly narrative devices that makes for a gripping read. Pacino’s key interest appears to be crafting a powerful, aesthetically potent adaptation which reveals the full darkness of Wilde’s play. 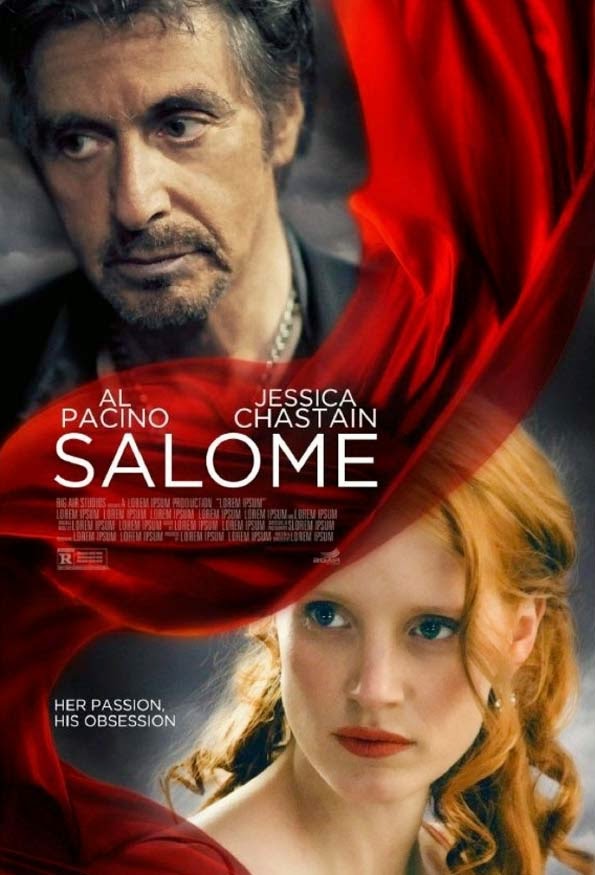 A curious beast, Pacino’s Salomé is shot in a theatre, and as director he makes no attempt to hide this. Occasional exterior shots are used, giving the film a visual style like no other this reviewer has seen. For example, the play takes place on the terrace of Herod’s castle (the theatrical stage) – yet we get glimpses of the barred-pit that hold John the Baptist captive, the bright drunken revelling of Herod’s party and presumably CGI shots of the exterior weather conditions – from cloudy skies to blood-red sunsets. This is a mix that gives Salomé a real visual buzz – feeling like part live stage performance and part arthouse cinematic endeavour.
With impressive use of lighting and colours, as well as limited props – Pacino crafts a watch that is vibrant and visually arresting, but also allows us to focus on the power of Wilde’s prose. The actors deliver their lines with an impressive conviction – most notably Jessica Chastain – in her first feature role. Chastain captures Salomé’s stirring transformative journey – showing how the calm virginal stepdaughter turns into a blood-lusting maniac as a result of her sexual obsession with John the Baptist (whose refusal to succumb to her advances ultimately results in his beheading at the bequest of Salomé).
Pacino is electrifying also. The actor owns the role of the boozy Herod who lusts after his virginal stepdaughter and agrees to grant any of her wishes. Pacino’s performance is brimming with a crazed energy, with Wilde’s dialogue flowing off his tongue with sheer ease and utmost conviction.
Both thematically and visual magnificent, Pacino’s Salomé is like no other theatrical adaptation. Brimming with dynamism and fiery energy, Pacino captures this warped tale of sexual awakening and bloodlust as it should be told.
★★★★★
Wild Salomé

Pacino’s documentary on the aforementioned play is a far more conflicting experience.The project details the actor-director’s struggle to balance the heavy task of performing a live play, shooting a cinematic feature and making a documentary simultaneously. This is intercut with scenes of Pacino travelling to key areas of Wilde’s life like his homes in Dublin, Paris and London – as well as presenting many scenes from the cinematic version of Salomé (a la Looking For Richard) 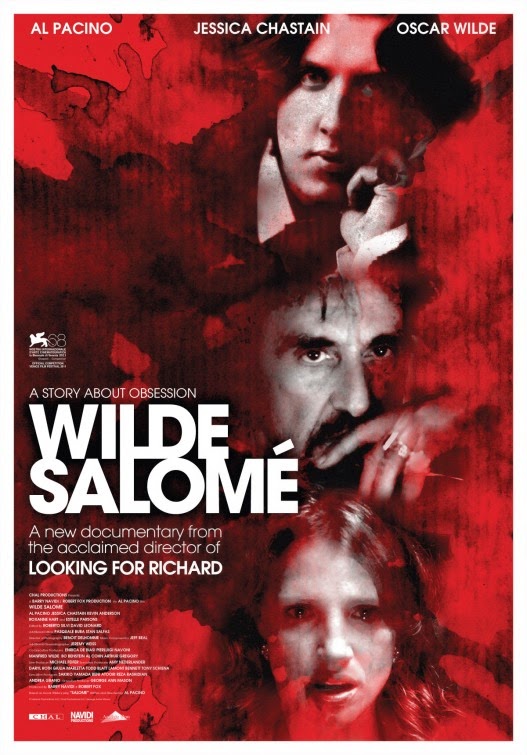 Pacino is such a likeable and charismatic presence that it is a sheer joy to watch him whether on-set or visiting Wilde’s historical sites and interacting with fans (a scene which sees him re-act his most iconic Tony Montana scene with a young fan is both sweet and amusing). His passion is truly infectious and by the end of either Salomé or Wilde Salomé you are likely to have a profound interest in Wilde’s little-known play.

Much of the interest of Wilde Salomé comes through watching the behind the scenes pressure of Pacino’s workload. Time constraints, involved producers and basic exhaustion all pay hindrance to the actor and his mammoth task.
Unfortunately Pacino has a tendency to reuse lengthy clips from Salomé in the documentary, with six or seven minute extracts from the feature continually inserted in. This may grow tiring for many viewers, especially as it detracts from the scenes which detail behind the scenes of the production, or Pacino’s travels to ‘Wilde landmarks’. However, if taken out of the double-bill format, these clips may have been more welcome.
This unlikely to provide any depth or new discoveries on Wilde’s life, but shines as an example of seeing one master of his craft pay tribute to another. Not viewing directly after the cinematic adaptation of Salomé would be recommended, however.