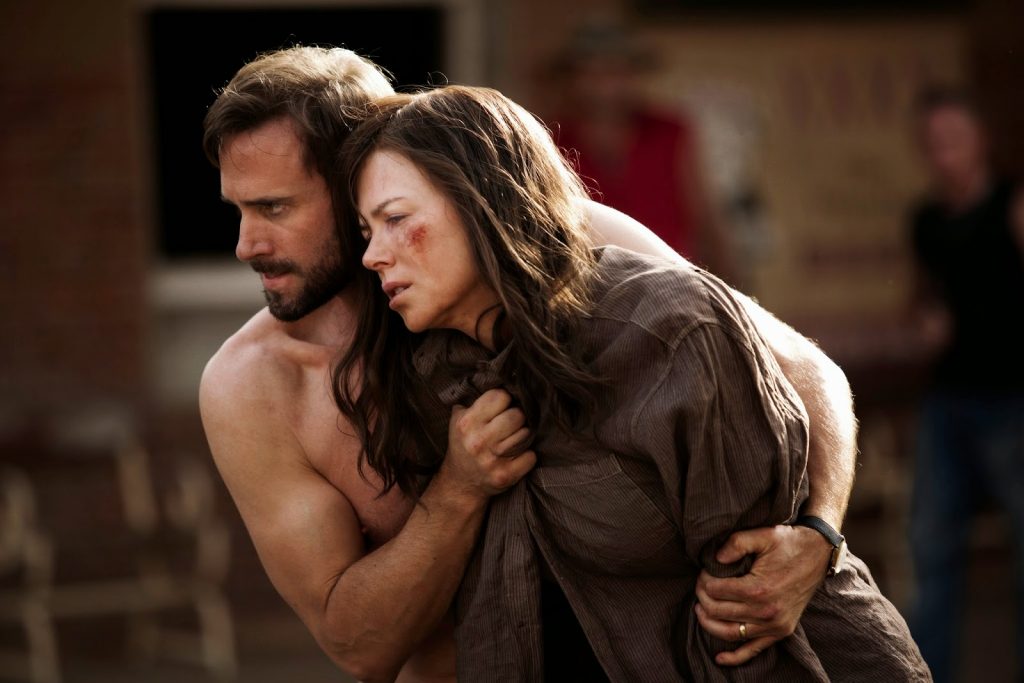 Kim Farrant’s debut feature Strangerland is a bleak and evocative look at the personal breakdown of the parents of missing children. It features startling performances from both Nicole Kidman and Joseph Fiennes.

In the Australian outback, a family find their quiet lives uprooted when their two children go missing. Whilst the small town goes on a manhunt for the missing youths lead by Detective Rae (Hugo Weaving), the parents Catherine (Kidman) and Matthew Parker (Fiennes) handle this loss in troubling ways.

Michael Kinirons and Fiona Seres’ brooding screenplay initially devotes time to capturing the broken dynamic of the Parker family – forced to relocate to the Outback after their fifteen-year old daughter Lily embarked on a sexual relationship with her teacher. Catherine and Matthew’s relationship has been dented by this situation, whilst youngest child Tommy sleepwalks (presumably due to the stress). With this broken family framework laid, what follows is a harrowing look at the mental and physical breakdown of the family parents as Lily and Tommy both disappear.

Tackling Catherine and Matthew’s different reactions to this situation results in a fascinating character study. Catherine attempts to fill this empty despair with sexual pleasure – trying to feel wanted by several of the male characters in Strangerland. However, this is a void that cannot be filled – there is no closure – this shockingly hits home in Catherine’s big breakdown scene, a harrowing portrait of public embarrassment in the face of gormless bystanders. Matthew’s feelings are more of anger and frustration, with Farrant capturing the concept that fathers are often the first to be suspected in the cases of missing persons.

The emptiness faced by The Parkers is paralleled in the primal, almost mythically enigmatic character exuded from the scorched outback landscape. This desolate wasteland environment is the perfect canvas for this tale of haunting emotion to unfold upon with the vast emptiness paralleling the psyches of the family. Cinematographer PJ Dillon exudes the maximum atmosphere from this gorgeous landscape capturing its isolated, hazy atmosphere from scorched sandstone desert to the hauntingly majestic canyons.

Truly gripping performances from both Fiennes and Kidman ensure this is watch that convinces and strikes audiences with its potent emotional nerve. Fiennes provides a career best performance as the father crippled by anger, frustration and melancholy, capturing the sheer horror of an innocent man classed as a suspect in the case of his missing children. Kidman is a force to reckoned with thanks to this undeniably harrowing turn which proves an uncomfortable watch. Kidman’s boldness must be admired in some of the film’s darker scenes. Both actors successfully capture the breakdown of communication between the once-loving couple – with primal feelings and broken hearts now controlling their mental states. Hugo Weaving provides excellent support as the Detective drawn into the bleak case.

Strangerland is a harrowing, uncomfortable, yet staggeringly powerful insight into the horror of loss. Enthralling performances, evocative direction, and a haunting narrative ensure this is a watch that grips from the onset.

★★★★★Also featured on The People’s Movies.