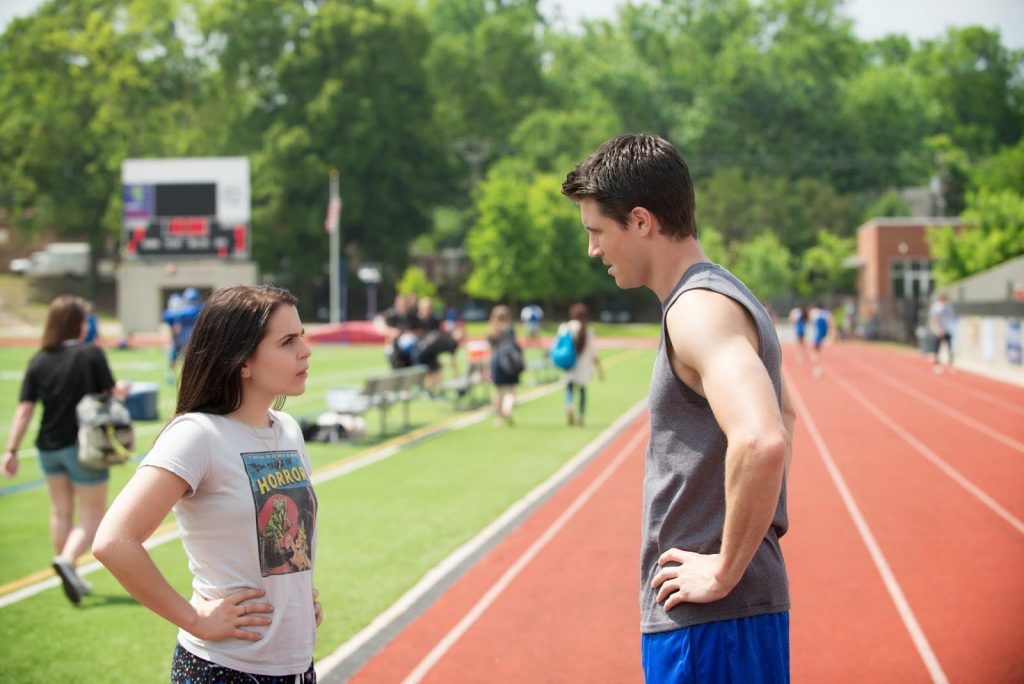 Attempting to distinguish itself from the rest of the American High School teen-comedies out there, Ari Sandel’s The DUFF provides some light fun in the midst of its many clichés.

Not a term that has picked up here in the UK, a DUFF translates as Designated Ugly Fat Friend, someone that is seen as an easy access point to their better looking, more popular friends. Sandel’s film follows Bianca (Mae Whitman), a high school senior who begins to question her social standing when the school jock, Wesley (Robbie Amell), points out that she is the DUFF in her circle of friends.

Whilst it’s hard to see The DUFF reaching the ‘classic’ status that other genre films like Mean Girls and Easy A did, there is much to enjoy in this savvy and occasionally inventive watch. The clichés of the high school film are ever present, mostly notably in the film’s character archetypes – the jock, the sensitive guitar player, the head bitch, and of course the outsider (or in this case, the DUFF). Josh A. Cagan’s screenplay sees Bianca team-up with Wesley in the hope that he can help her elevate from her status as a DUFF, with the trajectory following the standard romantic-comedy formula there onwards. Add friendship drama, far-fetched couplings, and ‘quirky’ parents and teachers to the fold and you have what feels like your average high school comedy.

Alongside this expected material, there are some slightly more interesting things going on. There is a sequence which sees the power of the viral video and social media within the modern school environment examined – this plays nicely into The DUFF’s themes on social status. Cagan also crafts some likeable, fleshed-out characters from these expected tropes. Mae Whitman brings a real spark to Bianca – a teen who would rather stay in and watch a Vincent Price marathon than go to a party (who wouldn’t?) – bringing a welcome sass and quiet confidence to the role. Bella Thorne oozes vitriol as the sharp school bitch who revels in the misery of others, whilst Robbie Amell has the charm and abs to inspire moderate swooning as well-intentioned jock Wesley.

Unfortunately, the core message of being true to yourself never really establishes itself clearly, with the conclusion placing more emphasis on Bianca’s glamorous transformation and new dress, than on the meaninglessness of the school popularity hierarchy.

For every gag that works there are two that don’t in Cagan’s screenplay, but director Ari Sandel crafts a buoyant atmosphere that plays with high school trivialities. This is helped in part through fun supporting turns from Allison Janney – as, you guessed it, the quirky mum, and Ken Jeong as an eccentric teacher – albeit both stars sailing on autopilot.

The DUFF is the one of the better high school set comedies of recent years, but is by no means a classic. Inventive streaks in Cagan’s screenplay just manage to rear their head above the clichés, with there being enough fun here to moderately entertain.