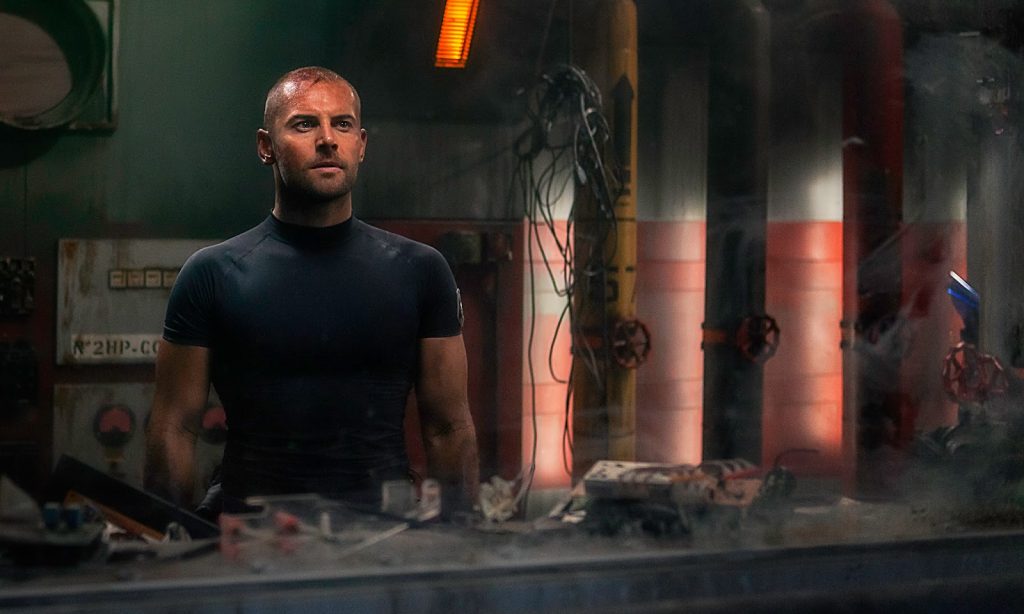 Director and co-writer Shane Abbess successfully harks back to the glory days of the sci-fi genre with a refreshingly enjoyable old school aesthetic and plenty of thrills in Infini.

Co-written by Brian Cachia, Infini follows a search and rescue team transported through space to a desolate mining station in order to rescue fellow soldier, Whit Carmichael (Daniel MacPherson). However, the outbreak of a deadly virus within the station turns the crew ultra-violent, making this mission even more dangerous.

Infini’s settings may have the industrial look of the likes of Alien and Event Horizon with their claustrophobic passages, steaming pipes and oozing space substances, but Abbess’s film has more in common with James Cameron’s Aliens – with the emphasis being on excellently crafted tension and bouts of frantic pulse-pounding action. Abbess captures a real ferocity in the action scenes thanks to sharp editing from Adrian Rostirolla and crushing audio from sound designer Sasha Zastavnikovic.

Instead of going down the bog standard zombie infectee route, Infini presents those with the virus as just ferocious versions of themselves – slowly losing their grip on humanity. This gives the film an unpredictable edge as we’re never entirely aware of when this violent streak will appear within the infected. In this claustrophobic location – atmospherically captured with some moody cinematography from Carl Robertson and George Liddle’s excellent production design – Abbess unleashes a taut cat and mouse chase as Carmichael explores the station attempting to find a cure to delay his transformation, whilst avoiding his deadly colleagues. There’s well-crafted tension throughout – from the manic blood-soaked chaos of the opening attack right-up until the film’s unsettling conclusion. Abbess keeps a tight grip on the proceedings ensuring events stay well-paced and absorbing from the onset.

Praise should also go to a talented cast who manage to convince in their respective roles. Daniel MacPherson captivates in the lead role of Carmichael – impressive as an action star, yet allowing a tough charm and hint of vulnerability (particularly as infection sets in) to come through in this commanding performance.

Infini wears its influences on its sleeve, and in doing so provides taut direction, stellar action set pieces, an excellent lead turn from MacPherson, and an aesthetic that channels the greats of the genre. It’s the strongest piece of sci-fi this year.