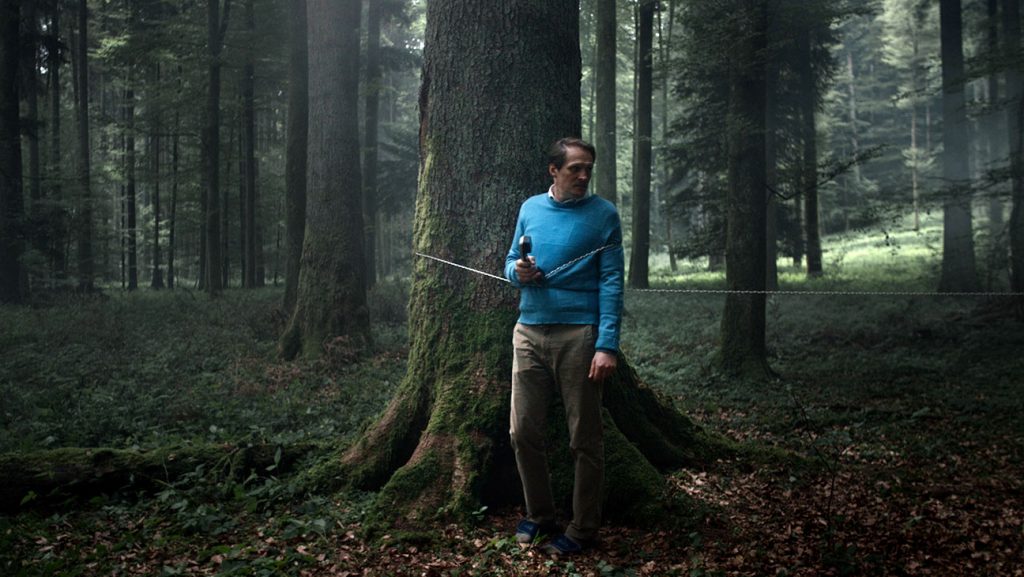 Tobias Nölle writes and directs Aloys, a Swiss-French existential drama examining isolation and grief amongst other issues. This subdued watch holds a quiet power in its ability to make the everyday appear surreal and mysterious.

Nölle’s feature debut centres on Aloys Adorn (Georg Friedrich), a private investigator coping with the death of his father. After drunkenly falling asleep on a bus, Aloys’ surveillance tapes and camera are stolen by a mysterious woman who begins to regularly phone him. The isolated Aloys and the assailant begin to develop a curious relationship over the phone engage in a “Telephone Walking” mind game.

For a debut feature, Nölle’s film is admirably crafted and refreshingly intelligent in its portrayal of the fantasies spurred from isolation. Aloys is crafted as somewhat of a tragic character – he’s abrasive, grieving and makes a living through spying on the intimate moments of others. Nölle parallels this in cold industrial aesthetics – Aloys lives in a drab urban flat complex, spends time on grey busses and commuting through dark and unpleasant locations. However, as Aloys begins to develop an over-the-phone relationship with this mysterious stranger and begin “Telephone Walking,” Nölle’s film veers into more exciting territory.

This narrative device allows Nölle to explore the boundaries between isolation and fantasy – as well as the aesthetics to become a little more creative in doing so. As Aloys and the stranger’s relationship builds, the pair begin to describe elaborate locations and scenarios in which they both mentally and synchronously visit – from picturesque forest scenes to trips to the zoo. The most entertaining of these is a flat party where Aloys and his new-found friend host and perform on the keyboard at a kitsch dance party. After these fantastical imagined sequences, the themes of isolation in Aloys hit hard reverting back to our protagonist in his cold, darkened flat.

Nölle’s narrative allows for some complex and impressive character work from actors Georg Friedrich and Tilde von Overbeck. Friedrich’s well-pitched performance allows us to feel sympathetic towards, yet often frustrated by, Aloys. Whilst his cold attitude does not help, the use of Aloys’ video footage – particularly of his late father – or even his relationship with his pet cat, remind us that he is distinctly human.

With an impressive narrative and visual device at hand, Tobias Nölle has crafted a solid debut that paints a mostly-engaging picture of isolation, fantasy and grief.