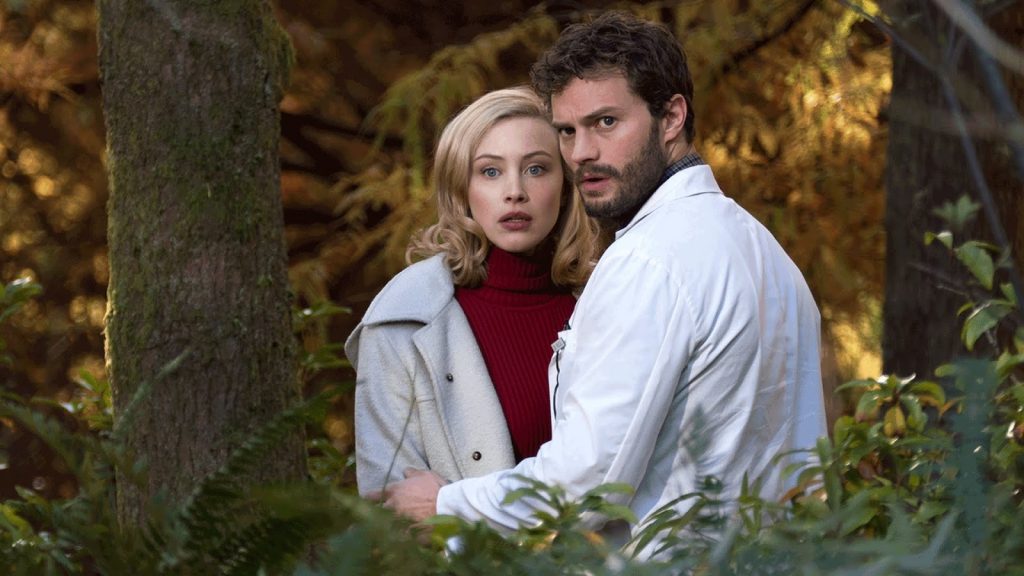 French filmmaker Alexandre Aja burst onto the horror scene in 2003 with his second feature, High Tension (Haute tension), this was soon followed by gore-heavy genre fare The Hills Have Eyes, Mirrors and Piranha 3D. Aja encountered his first major misfire with awkward Daniel Radcliffe starrer Horns, and takes a further change in direction with his latest feature, The 9th Life of Louis Drax. Toning down the genre elements many have come to expect from the French filmmaker, Drax is a tonally mixed bag that seems to lean more towards mystery-tinged melodrama in this adaptation of Liz Jensen’s novel – prepared for screen by Max Minghella.

Louis Drax (Aiden Longworth) suffers a near fatal-fall and finds himself in a coma, psychologist Dr. Pascal (Jamie Dornan) is drawn to the case and trying to piece together the circumstances of Drax’s accident. In doing so, he finds himself drawn closer to Drax’s mother Natalie (Sarah Gadon), whilst reality and fiction begin to blend.

Those expecting an excess or grisliness and gore from Aja’s latest may find their patience tested with the pacing of Minghella’s script often leaning towards sluggish and non-eventful. This slow-burning mystery attempts to piece together the cause of Drax’s fall through flash-back unreliably narrated by our title character, intertwined with Pascal’s current investigations. Whilst there is nothing wrong with this structure it does create a patchwork tone, whilst casting Drax as a rather unsympathetic young character. The flashbacks predominantly centre on smart aleck Drax discussing his previous “eight lives” or near fatal incidents with Oliver Platt’s Dr. Perez – revealing troubling instances about his personality – the murder of small animals being one such dubious confession. Given that Drax is quite a nasty young chap, it’s tough to invest in his current condition and survival in the Dornan lead present day scenes.

Aja shoots Drax with an almost Sirkian aesthetic, where darkened hospital interiors are contrasted with brightly lit outdoor scenes showcasing the tormented blonde seeking solace with hunky doctor making way for an underutilised romantic sub-plot. This is surprisingly fitting for the slow-burning nature of Drax, especially when Aja allows darker supernatural elements to creep in and compliment the clinical shimmer of the hospital setting. A grizzled voice that follows and probes Drax, as well as an impressively crafted sea-urchin creature that lingers around him, add a touch of genre decoration to the film, albeit these again feel underutilised. For the most part, we have a rather aesthetically unpleasing mystery driven by Dornan’s blandly handsome doctor. This is predominantly confined to the hospital setting and fails to majorly utilise these supernatural elements to craft any further intrigue, tension or suspense to any substantial effect. For the most part, feeling like a very muted and neutered affair. I would be surprised if much of Drax wasn’t left on an editing room floor.

Despite having little to work with Dornan manages to sail through Drax with a natural charisma. He makes a likeable, albeit poorly-defined protagonist. Sarah Gadon similarly works well with very little as Drax’s unsettled mother, whilst Oliver Platt holds our attention as a kindly hypnotherapist. Aaron Paul’s flashback centred role is barely worth mentioning and only serves to slowly edge Drax’s plot forward.

The 9th Life of Louis Drax is a semi-engaging affair, but falls short of expectations due to its failure to utilise the things that make it exciting and unique. There are hints of supernatural horror, suggestions that this could turn into an erotic-thriller, and the potential to turn this into an unsettling glimpse into the nightmares of the human psyche – but none of this happens. Dornan, Gadon and Platt’s natural charisma keeps things watchable, but Drax is undoubtedly a forgettable piece.